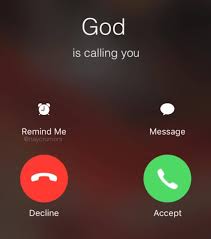 Before I launch into today’s sermon, let me admit I “mis-preached” (if there is such a word) last week.  Today’s Lectionary reading from the Gospel does not take us into what is known as Jesus’ “Sermon on the Mount,” as I said it would.  It will next week, so you have seven more days to take up my challenge to read Matthew 5-7.  Before we get there, we find Jesus calling his first followers.


A farmer stands in his field, looks up in the sky, and sees a most unusual cloud formation.  The billowy puffs seem to spell out the letters G, P, and C.  He takes this to mean Go Preach Christ and assumes it to be a personal call.  He rushes to tell the leaders of his church and, impressed with his story and enthusiasm, they invite him to give the sermon on Sunday.  Well, the farmer’s message is long, tedious, and incoherent.  When it finally ends, one church elder leans over to another and under his breath remarks, “I think G P C means Go plant corn.”


Every ordained person I know can tell you the story of his or her call.  Early in my teenage years I began to consider pursuing ordination as a career, first in the Presbyterian Church (the church of my youth), and then in the Episcopal Church after I graduated from college.  I was 24 when I first went to seminary.  The average age of my classmates was 45.  Several of them described resisting God’s call to the ordained ministry for years and years before finally embracing it.  Others said God had been calling them for a long time, but they did not recognize it until recently.


Even though I had been thinking about the ordained ministry since my youth, I have a very clear recollection of when I heard “The Call.”  It came just a month or two before I graduated from seminary.  I was talking with the Rev. Churchill Gibson; a legendary clergy figure known throughout much of Virginia, who was serving as the school’s chaplain at the time.  Whereas most professors thought and talked like academics, Churchill had a very folksy, down-to-earth sensibility.  In the course of our conversation he said to me, “Keith, do you know why it is easy for God to get people like you and me into the ordained ministry?”  “No,” I said.  “It’s because we don’t have any other options.”  I thought about that for a little while.  Churchill was not saying there is nothing else I was capable of doing.  He was saying there is nothing else I really want to do.  I began to ponder what I might enjoy doing if I was not ordained.  Nothing came to mind and that moment, as unspectacular as it was, became the moment really heard God’s call to me.


Some years ago the Lily Foundation funded a research team to explore the similarities and differences between ordained clergy and lay people.  The team identified vocation and calling as important spiritual experiences and theological concepts for clergy that often are at the center of our preaching and teaching.  The team also learned very few parishioners actually feel called, believing what they do with their lives does not matter or have an impact on the church or the world.


There is an old saw: Do you know how we separate Republicans from Democrats in the Episcopal Church?  With an Altar Rail.  While this may not be entirely accurate, it is likely the Altar Rail that separates those of us who feel called from those who do not.


As Jesus launches into his public ministry he picks up and moves from Nazareth – the city of his childhood and youth – to Capernaum, a fishing village on the shores of the Sea of Galilee.  It is here he begins to teach and preach and heal.  And it is here he begins to invite people to follow him as his disciples – folks who will learn from him and pattern their lives after his example.


The location appears to be such a minor, insignificant detail, but it matters.  Jesus did not set up shop in the capital city of Jerusalem.  He did not look for recruits in the Temple.  He was not interested in political leaders or academic thinkers.  He “invited” very ordinary people to follow him and to work with him.  Peter, Andrew, James, and John are not particularly gifted nor are they well positioned in the echelons of notoriety or power.  They are average people who are willing to believe God does extraordinary things and they are willing to be a part of what God is doing.  This is “the call” they welcome.  And in so doing, they will become witnesses to the work of God in Jesus Christ and foundation blocks in a movement that changes the world.


Are you called?  Eric Liddell, the Olympic champion and central figure in Chariots of Fire, once said to his sister, “When I run, I feel God’s pleasure.”  He perceived running to be his call.  You may protest elite athletes enjoy a luxury most do not; that they are so uniquely gifted it is impossible for them to ignore their abilities as being anything other than a gift from God to be used for God’s glory.  You may say, well, that is fine for them, but it is not me.  It is not who I am.


The Presbyterian minister Frederick Buechner is known for articulating the most helpful definition of calling in our day.  He says God calls you to the place where your deep gladness and the world’s deep hunger meet.  Think about that for a moment.  Can you discern what gives you joy and can you imagine how it meets a desperate need in our world today?  It explains why some of us are so committed to St. Paul’s Food Pantry.  It is a place where our joy intersects a crucial need in our community.  It is why some of us organize bible studies or teach in the Sunday School.  We delight in the message of God’s story and recognize the hunger many have for knowledge, guidance, meaning, and support.


And it explains why Beth Bagley, Jim Gordon, Christa Hall, and Dan Jones offer themselves for election to service on St. Paul’s Vestry at today’s Annual Meeting.  Each finds “deep gladness” being involved in our parish.  Each perceives the need we have for leadership at this time.  Each is called to things both menial and momentous.  They will unlock doors on Sunday morning and set coffee pots in motion.  They will oversee St. Patrick’s parties and parish breakfasts.  They will pull weeds and spread mulch.  They will monitor budgets and make sure copiers and computers are working properly.  They will also sit with me as we seek to discern God’s will for us as a parish.  We will consider trends and contemplate where God’s Spirit is leading us.  These four people, along with the eight Vestry members who return, are answering a call.  It is God’s call because they are glad to do it and they perceive the parish’s need for their time and talents.


From this I hope you sense not all calls are life-long endeavors.  I hope to be a priest for life, but this is not my only call.  At a clergy conference in November 2015 we were challenged to listen for a “big thing” God was calling each of us to do.  This is what I discerned: “I want to help St. Paul’s celebrate well its 375th Anniversary.”  We are well on our way to doing this, but believe me when I say I am also aware this “call” will come to an end in about six months.  It is not a life-long pursuit.  Something else will have to emerge and in the second half of the year I look forward to working with our Vestry to discern what it might be.


So, many calls – perhaps most – are not “for life.”  Here is another thing to note about calls: For the most part, they are not tied directly to an aspect of the church as a religious institution.  Bill and Ginger Owen, through their work with the BARKS program, which provides an opportunity for children to read out loud to therapy dogs, is a wonderful example of this.  They are the embodiment of deep gladness intersecting the world’s deepest need.  I think about George and Phyllis Cornell who have taken steps to ensure their beautiful property on the Nansemond River will remain as it is in perpetuity.  I think about John Rector who understands how the personal and business decisions he makes impacts the dozen or so folks who work on the shop floor of the company he manages.


Ultimately, answering God’s call becomes the primary source of life in our lives.  Your call is unique.  It may be life-long or it may be for only a while.  It may be manifested within the life of the church or it may manifest the life of the church in the world.  But here is the central truth about God’s calling: if you don’t perceive it or heed, the world is poorer for it… and so are you.  What thrills you when you think about it?  What fills you with joy and meaning and purpose?  God calls you to it and to do it in Jesus’ name for the sake of the world.
Posted by Keith Emerson at 10:08 AM No comments: 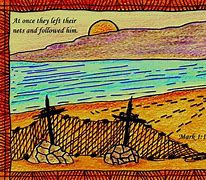