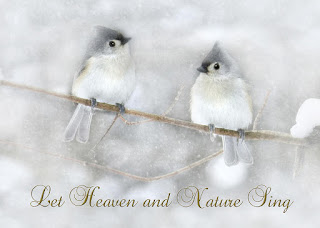 
Christmas Eve 51 years ago was unlike any before or after.  As people around the world gathered with family and friends to celebrate Jesus’ birth, three men – astronauts – were farther from home than any human beings had ever been before.  The mission to send Apollo 8 into lunar orbit was something of a “Hail Mary” attempt by NASA to reinvigorate the space program following the disastrous fire that killed the crew of Apollo 1 during a routine test on the launch pad.  It was a bold attempt to get ahead of the Russians in the Space Race and perhaps even get back on track to achieving President Kennedy’s goal of a moon landing by the end of the decade.


Christmas Eve 1968, as Apollo 8’s crew prepared for a primetime, worldwide television broadcast live from just miles above the lunar surface, the most amazing thing happened.  The astronauts looked out one of the crafts’ windows and witnessed something no one had ever seen before or imagined.  Bill Anders grabbed his 70mm camera, loaded it with color film, and took a picture which has become one of the most famous and influential photographs.  Along its bottom edge you see the bright grey landscape of the moon’s craggy surface.  Above this foreground is the black void of space.  Suspended in the center of the dark nothingness is a radiant and stunningly beautiful blue and white distant world with the lower crescent obscured in shadow.  It is us as we have never seen us before.  The image quickly came to be known simply as “Earthrise.”


It continues to reorient our self-understanding.  The Earth appears fragile and finite.  It reminds us national borders are human constructs.  It speaks of the reality this planet is our only haven and our only home.  Just a few weeks after Earthrise was published President Nixon signed legislation creating the Environment Protection Agency and congress passed the Clean Water Act.  The image underscored the need to end the Cold War in order to lessen the possibility of nuclear annihilation and create a greater sense of the human family.  It deepened some people’s faith in a Creator; which was augmented by the crew’s decision to read the creation story from Genesis 1 during their Christmas Eve broadcast.  It was a transformative moment in human history.


300 years ago another such moment occurred when an English poet sat down to wrestle with a couple of biblical texts, primarily the 98th Psalm and the third chapter of Genesis.  His name was Isaac Watts and in time he would come to be known as the Father of English Hymnody.  Listen to the words of the psalm from the King James Version from which Watts read:


Make a joyful noise unto the Lord, all the earth: make a loud noise, and rejoice, and sing praise.


With trumpets and sound of cornet
make a joyful noise before the Lord, the King.


Let the sea roar, and the fullness thereof;
the world, and they that dwell therein.


Let the floods clap their hands:
let the hills be joyful together.


Before the Lord;
for he cometh to judge the earth:
with righteousness shall he judge the world,
and the people with equity.


Placing the psalm’s theology of Creation’s call to praise God beside the Genesis 3 story of the fall when the ground is infested with thorns as God’s punishment for Adam’s sin, Watts pondered how creation can sing God’s praise while being under this curse.  He concluded the complete fulfillment of the psalm’s vision will not be accomplished until Jesus returns again.  Setting his thinking to verse, he crafted the lyrics to what has become the most popular Christmas carol ever written:


Joy to the world!  The Lord is come:
let earth receive her King!
Let every heart prepare him room
and heaven and nature sing.


Joy to the earth! the Savior reigns:
let us our songs employ
while fields and floods, rocks, hills and plains
repeat the sounding joy.


No more let sins and sorrows grow,
nor thorns infest the ground;
He comes to make his blessings flow
far as the curse is found.


He rules the world with truth and grace,
and makes the nations prove
The glories of his righteousness
and wonders of his love.


To celebrate the 300th anniversary of these words we at St. Paul’s have adopted the theme of “Let Heaven and Nature Sing” for our Advent worship by inviting nature into our worship and space in as many different and creative ways as we could imagine.  And after thoughtful discussion we decided to keep much of what we created in place for tonight’s service in order to reinterpret it to speak of our Lord’s incarnation into our world.  I hope and trust what you encounter here tonight will reverberate in some profound and powerful way.


Tonight we gather to celebrate our Savior’s birth.  It reminds us God becomes human flesh and lives among us to change something about us.  We describe this conversion using many different words and images:


No matter what the idea or image, each describes a transformation; a new way of seeing the world and being a part of it.  Like Earthrise and like worshipping with an emphasis on singing with Heaven and Nature, each invites us to see ourselves in a way we have never before conceived or imagined.


As profound as the Earthrise image has been and as popular as Watts’ carol has become, neither begins to approach the cosmic impact of the birth we celebrate tonight.  The God who created us has come to us in human flesh to save us from ourselves and to sing for us the song of God’s glorious intention for all life.


I am grateful for our transformative Advent journey with its invitation to add our voice anew to the choir of the saints in heaven and saints on earth who join with Heaven and Nature to sing God’s praise.  I wish you and all you love a very merry Christmas.
Posted by Keith Emerson at 12:15 PM No comments: 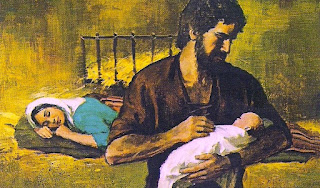 
When describing events in and around the birth of Jesus, Matthew’s Gospel tells the story from the perspective of Joseph the carpenter.  The New Revised Standard Version of the bible, from which we just heard, states he is “engaged” to Mary, but this rendering is somewhat misleading.  A more accurate translation states they are “betrothed”, but very few today understand what this entails.


In Jesus’ day betrothal is a legally binding relationship resulting in marriage, usually twelve months later.  Sometimes the groom states a preference for a particular bride, but more often the match is made at the discretion of the parents.  During betrothal the future bride (often a young teenager) continues to live with her parents and the couple does not engage in sexual relations.  They use the time to get to know one another and adjust to the idea they will become husband and wife.  There are occurrences of a bride moving into a groom’s home prior to the marriage through a ceremony known as a “home-taking”, but this continues to be a period of celibacy.


When the times comes for the wedding, the groom and his companions process to the bride’s home to escort her and her party back to the groom’s house for a celebration which might last as long as a week.  At a certain point during the festivities the bride’s father draws up a marriage contract after which the couple goes to a “bridal chamber” to consummate the marriage.


Something significant unfolds during the time Joseph and Mary are betrothed.  She becomes pregnant and he knows he is not the father.  There are only two possibilities.  Either Mary had a consensual relationship with another man or another man forced himself on her.  Either scenario releases Joseph from the betrothal.  Either opens Mary to shame, disgrace, and the potential of being stoned to death.  Most likely Joseph believes Mary has been victimized, which accounts for his desire to shield her as much as possible from the consequences of being pregnant.  That Joseph embraces a third possibility after a dream is truly remarkable.  The couple – she pregnant – remains betrothed.


Matthew tells us Jesus is born in Bethlehem.  He provides no details about the couple travelling there from Nazareth to be registered for a census.  All he says is that Jesus is born here.  He says nothing of a stable, angelic chorus, or shepherds watching their flock.  These details are found only in Luke’s Gospel.  Matthew alone tells of the Magi’s visit.  They find Mary living in a house with Jesus being a small child, most likely not yet two years old.  Neither Luke nor Matthew provides details of Joseph and Mary’s wedding and surrounding festivities.  Whatever occurs takes place after Jesus is born and most likely is a subdued affair given all that has transpired.


Omitting the miraculous conception, we still have no way of knowing how many betrothals in Jesus’ day are as complicated as this one and we have no way of knowing how common or uncommon Joseph’s response is to it.  What we do know is the culture’s general attitude about wives.  They are property and belong to their husbands, who generally regard them primarily as reflections of themselves.  Thus, more than a betrayal, Joseph (as a product of his culture) must have held Mary’s pregnancy to be a stain on his own reputation and social standing.  A typical man of his era would think primarily about how her pregnancy diminished him.


Matthew tells us Joseph is a “righteous” man.  I hear in this he has appropriated all the best of his tradition while rising above its limitations.  Yes, he is a product of his times, but he is better than his times.  Rather than acting ego-centrically (What does this mean for me?  How does it reflect on me?), he subjugates himself in order to think first about what he can do for Mary.  And he does this even before an angel comes to him in a dream.


Fast-forward to our time where we are conditioned to ask of any situation “What is in it for me?” “How will I benefit?”  “How will it enhance the ways others think me?”  “How will it bolster the way I think of myself?”  Joseph’s example invites us to ask new questions: “What does this situation need?” “What do I have to offer?”  “How might my personal sacrifice make things better for another?”


Let’s call these “Joseph Questions”!  They are questions we ask when we see ourselves in a new relationship with all around us.  Over the course of Advent we have described this new perspective through the metaphor of a cosmic song of praise.  Each of us is part of a choir whose membership includes every created thing.  Now we can choose to sing our part much like the soprano I remember in a church choir long ago who used her powerful voice to drown out every other person and section.  Or we can sing in harmony under the leadership of the Choir Director who has created us all and called us together.  We can always push for our advantage or, like Joseph, we can act in ways to enrich one another.
Posted by Keith Emerson at 11:53 AM No comments: