Our World & the Wilderness 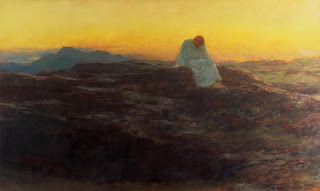 Mark tells us that immediately after his baptism Jesus is driven into the wilderness by the Holy Spirit.  “Driven” is an interesting word.  Given that Jesus had just heard a voice from heaven and then is swept off into a desolate region, if it were a different person and a different circumstance we might wonder what sort of mental illness has gripped him.  But here, I think it is best to understand “driven” as “compelled.”  Jesus has just had a truly life-changing experience, but needs to make sense of what it means.  To do that he withdraws from society to a place that is austere, that is without distractions.
It is during this time that Jesus comes to realize and internalize the most important truths of life:


These are things he could only come to know in the wilderness.  It becomes that experience where he gains clarity, claims identity, and discerns purpose.
Perhaps no greater task lies before the Church today than to gain clarity, claim identity, and discern purpose: clarity about what is happening in our culture, identity as to how to be God’s people in our times, and purpose as to how to be evangelists of God’s love for our hurting world.
C.S. Lewis, writing at the outset of World War II, observed “something in the world has changed, you can feel it the air.”  Often it is difficult to figure out what exactly has changed when you are living in the midst of it, but every now and then you get a glimpse.  Here is one: In 1999, a survey asked Americans, “Do you consider yourself spiritual or religious,”  “Spiritual” refers to an experience of faith while “religious” indicates involvement with an institutional organization.  54% identified themselves as being “religious but not spiritual.”  Just ten years later, in 2009, only 9 percent of Americans responded that way.  30% said they are “spiritual but not religious.”  That is a pretty dramatic change in just one decade, isn’t it.  It suggests that fewer and fewer people are interested in doing what we do here every Sunday morning.
The culture is changing in ways we don’t understand and we in the Church are struggling to figure out how to share the Gospel with people who don’t think we can provide something to satisfy their spiritual hunger.  At least year’s diocesan council, our speaker, Phyllis Tickle, described what is happening through the metaphor of pay phones.  Since the invention of the pay phone, its use increased steadily up until 1989.  At that point the number of people placing phone calls through pay phones plummeted at a staggering rate.  If you looked only at that data you might conclude that people no longer want to be in verbal contact with one another, which, of course, is not the case.  Communication is more important now than ever, but pay phones are no longer where they turn to stay connected.  If we in the Church were in the communication business, you could say that we have built some of the nicest phone booths anyone has ever seen, but we can’t figure out why fewer and fewer people are coming to us to place a call.
I have been ordained for twenty-five years now and for most of that time I have been ministering in phone booths whose patrons are truly wonderful, kind, loving, faithful people.  More and more I sense that the last fifteen years of my active ministry are going to be spent figuring out how to be the Church in a world no longer interested in phone booths or churches, but longing to know kind, loving, faithful people.
Here is another way our culture has changed.  In 1960 only 5% of babies born were delivered by unmarried women.  In 2010 it has risen to 42%, an eight-fold increase.  Today’s children are growing up in very different home environments than the culture of my childhood.
Divorce plays into this as well.  I recently read the story of a twenty-something year old woman by the name of Ashley who was on a cross-country plane trip seated next to a twelve-year-old girl.  The girl’s mom had put her on the plane to visit her father.  She told Ashley that her parents were divorced and her dad had a job in Georgia so she flies there a couple times a year to visit him.  This was her second trip alone on a plane.  The two struck up a conversation that day and when the flight ended the girl said to Ashley, “I think you know me better than anyone else in the world.”  What does that say?
Our children are being born into social settings very different from what most of us here knew growing up.  Often their lives are marked by profound loneliness and they are alienated from the guiding institutions which helped to form and shape us.  How desperately do they need to gain clarity, claim identity, and discern purpose?  The Gospel compels us to minister to those so lost and hurting.
We could go on, citing statistic after statistic that all point to the same things:


I wonder if I – if we – can hear the baptizing voice of God speaking: “I love you and I have chosen you.”  Are we – am I – willing to pray for God’s Spirit to fall on us and compel us into a wilderness where we might gain clarity, claim identity, and discern purpose?  For years and years we were so good at communicating the Gospel by being a phone booth, but now phone booths are obsolete.  The Gospel, praise God, never goes out of style, even if the way we convey it has a shelf-life and does not last forever.
One person is on the right track – Ashley.  She stayed in touch with her twelve-year-old friend long after the trip had ended through texts, phone calls, facebook friends… everything the digital age provides to help people connect and build a relationship.  Ashley found a way to share her faith in Christ with a young girl she met briefly on an airplane.  A year later that girl decided she wanted to be a follower of Christ too.
The good news is that the faith is going to go on.  The ways it gets transmitted from one generation to another is a very different matter.  St. Paul’s is such a rich, wonderful deposit of Christian faith and living and it has so much to offer to those who are lost and alone in this world - and their number is staggering.  What can we do?  Perhaps it is time we got driven into the wilderness in order to gain clarity, claim identity, and discern purpose.

Posted by Keith Emerson at 5:04 PM No comments: