The Flaws of the Faithful 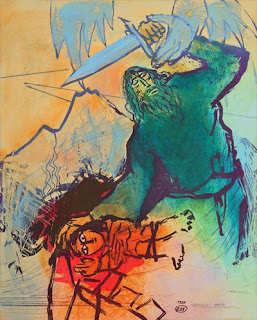 The Sacrifice of Isaac by Adi Holzer

The problem with history is (as we are seeing anew) if you look closely enough at the life of any person deemed to be a ‘hero’ you are going to find some flaws.  Some defects are so deep and pervasive as to disqualify a person from being an example to follow.  Other blemishes are more reflective of the times a person lives in.  These only become problematic as a new age with different values looks back on the past and condemns a person for little more than being a product of his/her times.

Did you see the recent documentary chronicling the summer Mark McGuire and Sammy Sosa competed to break baseball’s single season home run record?  At the time they were lauded for saving the sport as well as lifting up the American spirit.  But then it came to light their feats were fueled by the use of illegal steroids and their achievements were called into question.  Did their cheating invalidate their records and shame them or were they merely emblematic of what was happening on a grand scale in baseball at the time?  If you look closely enough at any hero you will find something not to like.

In recent weeks our Sunday Lectionary has us reading the stories of Abraham’s life.  He is credited with being the founder of the world’s three great monotheistic religions: Judaism, Christianity, and Islam.  St. Paul’s considers him to be an exemplary figure deemed by God to be righteous on account of his faith.  And yet the more we read of him, the more we wonder about his apparent lapses and indiscretions.

Abraham’s story begins in Genesis 12 when the Lord appears to him and tells him to leave his native home to go forth to land God will give to him.  The command includes the promises God will make of Abraham a great nation, his name will be great, and he will be a blessing to all people.  Abraham obeys, but is silent.  When he comes to the land God shows him, he finds it is ruled by the Canaanites.  He builds an altar, makes a sacrifice to the Lord, and settles here.  Then his flaws begin to show.

At the onset of a famine, Abraham abandons the land God promises and goes to Egypt.  Fearing he will be killed because his wife is beautiful, he instructs her to pretend they are brother and sister.  Abraham offers to the Pharaoh the women through whom he is to procreate a great nation.  Back in Canaan, Abraham has to go to war against four kings in order to save his nephew Lot.  Only after he is victorious does God promise to “shield” Abraham from harm.  Now he speaks: “What good is your protection if I do not have an heir?”  Again God promises fertility and again Abraham’s response is silence.

Last Sunday’s reading comes next in the story.  You remember how Abraham’s wife offers her slave Hagar to him.  She conceives and gives birth to Ishmael.  This arrangement rings neither of righteousness nor feels like an act of faith.

Thirteen years pass.  Abraham is now 99 years old and God has promised him five different times over the years and years of his life he will be the father of a great nation.  His response now is to fall on his face and laugh.  When his wife hears God’s messengers promise she will have a child within a year, she too laughs.  But finally the promise comes to pass and Isaac is born.

In my reading of the text – and I may be wrong here and have no scholarship to support my view – I suspect something is less than perfect about Isaac.  Given his parents are elderly when he is born, is it possible he has a disability?  We know today there is a connection between Downs-Syndrome and the age of the parents at birth.  Is it possible Isaac is born with Downs?

The first evidence I see comes from last Sunday’s reading.  Do you remember how Ishmael, Isaac’s older half-brother, is observed mocking him?  Could this be a sign Isaac has a mental or physical disability?  When it is time for Isaac to marry, Abraham sends a servant back to his homeland to find a suitable bride.  Why does Isaac not go himself?  When the servant returns with Rebekah, she seems less than overwhelmed when she first meets her future husband.  Why?  What about his appearance is not what she imaged?  For Isaac’s part, he has been in mourning over the death of his mother and it is only after marrying Rebekah that he is comforted in his loss.  In his old age, Isaac will be duped by his son Jacob into thinking he is in fact Esau, Isaac’s other son.

I suggest there is enough evidence in the biblical record to make my theory a possibility.  And if Isaac is in some way disabled, it sheds an interesting light on today’s reading.

The Binding of Isaac is perhaps the most perplexing story in the entire bible.  Some make sense of it by trying to sanitize it: Abraham knew all along God would intervene and God knew all along Abraham would act in faith.  But if this is the case the story is drained of all of its drama and power.  Why even tell it if the whole episode is merely an exercise of going through the motions?  And if it is so straight-forward, how do we account for the fact it is never referenced anywhere else in the Old Testament?  The prophets don’t speak of it.  The psalm writers don’t include it in their songs of God’s presence in the lives of God’s people.  Moses does not reference it as a part of the story of deliverance.  Why?  Because it is a story so confounding no one knows quite what to make of it.

The text states clearly “God tested Abraham.”  And when God is satisfied Abraham has passed the test, the Lord says, “Now I know that you fear God, since you have not withheld your son, your only son, from me.”  Is God trying only to determine whom Abraham cares about more… God or Isaac, his son?  Can God really be this jealous and petty?  Is this actually a test only about of priorities?

Or, if I am correct in my assumption about Isaac, is it possible the real test here is to see if Abraham believes God’s promise can be fulfilled through a physically and/or mentally challenged son?  It makes sense to me Abraham would wonder how his offspring will be as numerous as the stars if Isaac does not seem up to the task.  Is the question Abraham faces this: can God do something wonderful through a person who seems to be less than perfect?

There is so much to explore in this lean account.  I am always drawn to two things happening just as Abraham, armed cocked with knife in hand, dominates Isaac.  First, God speaks.  Always in the moment of our deepest need the Lord is present and the Lord reaches out to us; calling us to pause, to pray, to reflect, to be open to something – anything – from beyond.  And second, Abraham looks up.  Completely absorbed, and totally caught in what we might call tunnel vision, he breaks free of the moment, looks up, and in doing so sees what God provides.

And do not underestimate the faith it takes to see God’s provision in the presence of the ram.  Abraham can easily push on with the task of sacrificing his son, being ever faithful and diligent to his initial interpretation of God’s will.  But in this most critical moment – in this moment where the stakes are so incredibly high – he is able to discern God working in a new way.  Just as he was able (in last week’s reading) to hear God’s promise to deliver Hagar and Ishmael, so too does he remain open to God’s working in a new and unexpected way through Isaac.