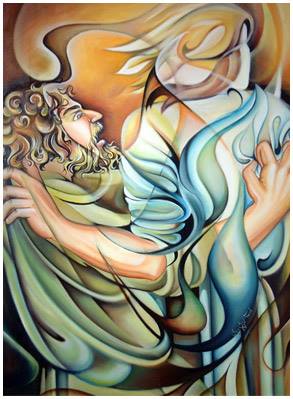 In today’s first reading we hear one of the most intriguing stories in all of Scripture; the turning point in person’s life.  Until now he has been Jacob – a name which means the Supplanter.  From the moment he was born holding onto the heel of his twin brother Esau, he has connived his way through life, trading for his brother’s birthright then stealing from their father the blessing intended for the first born; after which Jacob flees from his home for fear his brother will kill him.  He returns to the land of his ancestors and there meets and marries Rebekah, but not before being tricked into a union with her older sister.

Now, years later, Jacob has prospered greatly and returns home.  He receives word Esau, with an army of 200 men, is coming to meet him… one would think to exact revenge.  On the night before their encounter, Jacob is alone when something or someone one attacks him.  They wrestle throughout the night, but neither prevails.  As dawn approaches the assailant injures Jacob, dislocating his hip.  Still, the Supplanter refuses to let go until he is given a blessing.  And the blessing he receives is this: his name is changed from Jacob to Israel, which means “one who has striven with God and humans and prevailed.”

Now, a new name may not seem like much of a blessing to us, but in that ancient Jewish culture it is hugely significant.  Hebrew is held to be the language God uses to create the world.  The 22 letters in its alphabet represent 22 different ways God’s power is manifested in the world.  The combination of letters used to make up any particular word is not arbitrary.  Each letter’s individual power combines with the other letters in a word in order to participate in the reality of what they describe.  The name gives the person or thing it’s essence and substance from God.

Our word chair, for example, is completely arbitrary and has no impact on what it describes.  But in the Hebrew language the word for chair and the chair itself are inseparable.  The chair is a chair because it has been called a chair.  It can be nothing other than what it has been called.  The actual letters of the word chair, each describing a particular aspect of God’s life and energy, work together to create the thing that is a chair.

Now, Hebrew thought advances this thinking another step when it comes to names.  A person’s name is your life force directing everything about how your life unfolds.  In fact, they believe when a child is born a spirit of prophecy rests on the parents, enabling them to foresee the future by bestowing an appropriate name for who and what you will be.  Thus, Jacob was not just named the Supplanter, it is his life’s destiny.  He can be nothing other than what he is named.  Given this, the blessing of a new name is no small thing.  It represents a complete reorientation in his life and future.  As Israel, he is now a striver who prevails.  He is now on a new trajectory and God has remade him for a new purpose.

Vestiges of this thinking still remain in our culture.  Think about how a Cardinal takes on a new name once elected Pope.  The name he chooses in some way influences who he will be as pontiff.  Or think about the Washington Football Team, which has given up its name.  Whatever it decides to call itself will have an impact on shaping the core identity of its team and fans.  And think about the importance of a person’s name at baptism.  The act of Christening – a word which means Christ-ending –  names our identity from that moment forward as Christ’s own forever, as sure as any Christened ship is known by the name it receives when a bottle of Champaign strikes against its hull just prior to launching.

At some point in our 60’s or 70’s, many of us have the experience of being given a new name and a new identity.  The person who bestows this blessing is a grandchild, whose first attempt at naming us has a way of sticking.  You can live for six decades or more as Bill or Betty, but one day you become Nana or Pop-Pop and that is who you will be the rest of your days.  And your new name will come to signify you as new person, with a new purpose, new priorities, and a new perspective.

The blessing Jacob receives does not come easily.  After a lifetime of cheating and trickery he has finally made something of himself, but the means he uses and the people he hurts along the way come back to him.  In the morning Jacob will face his day of reckoning.  Still, for now, at night, in the wilderness, he is alone, perhaps for the first time since all those years ago when he laid down his head on a rock at Bethel and dreamed of a ladder ascending into heaven.  On that night Jacob made a vow: if God would watch over him on his journey, keep him clothed and fed, grant him prosperity, and bring him home safely, then he would take God as his God.  Now, on this night, all but the final condition has been met… and it seems highly unlikely his reunion with his brother will go well.

Then the wrestling begins.  As I said, it is not entirely clear who or want his assailant is.  Initially the text refers to a man.  Is it Esau, or one of his riders?  There are legends of river demons.  Is this a possibility?  Might Jacob be wrestling only with himself on this fitful night?  As the story unfolds, the assailant seems to be an angel.  After it is over, Jacob himself believes he has been grappling with God.  Perhaps the identity of the combatant is best left unanswered, because in the moment when all your failures and shortcomings come back to haunt you, we are wrestling with not just one opponent.  You struggle with those we have wronged, with your own demons, with yourself, and with God.

The wrestling ends and Israel is blessed.  The image of him limping into the sunrise, ready to meet his brother, is one of the most poignant in all of Scripture.  It is a universally human moment in which many of us can imagine our own stories.  As Israel approaches Esau, the older brother dismounts and runs toward him.  The story turns beyond anything we might imagine because Esau comes not for vengeance, but mercy.  The two embrace and, for the first time in his life, Jacob – now Israel – receives something he did not have to cheat or scheme to get – forgiveness.  His life, along with his name, has changed.

Posted by Keith Emerson at 9:58 AM No comments: