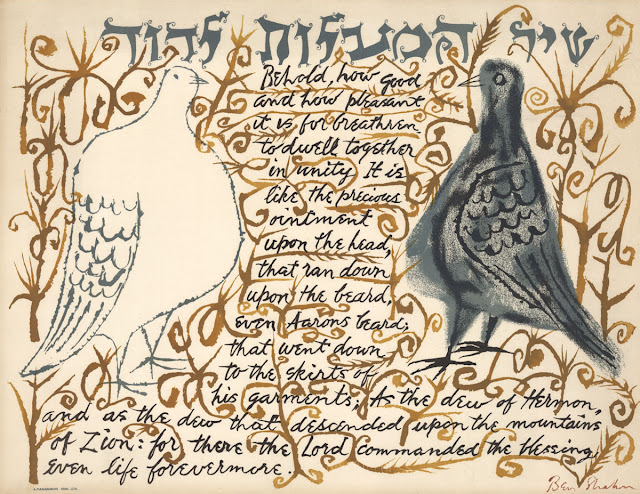 If you were a pilgrim walking to Jerusalem to attend one of it’s many yearly religious festivals, you passed the time saying or singing what are known as the Psalms of Ascent.  These fifteen psalms (numbers 120-134 in our prayer book) speak to a variety of situations pilgrims encounter during their journey.

Imagine getting your first sight of Jerusalem after several days of walking.  You are tired, but it is built on top of a mountain and you have got to make the climb.  Perhaps the words of the 121st Psalm will help:

I lift up my eyes to the hills,

from where is my help to come?

My help comes from the Lord,

the maker of heaven and earth.

Once you get there, you and your companions might want to sing 122nd Psalm:

I was glad when the said to me,

“Let us go to the house of the Lord.”

Now our feet are standing

within your gates, O Jerusalem.

Maybe during your travels you reflect on past events and times when you came up short.  Psalm 130 would be of comfort:

If you, Lord, were to note what is done amiss,

O Lord, who could stand?

For there is forgiveness with you;

therefore you shall be feared.

With [the Lord] there is plenteous redemption,

and he shall redeem Israel from all their sins.

One of the Psalms of Ascent – Psalm 133 – is appointed to be read in response to today’s first lesson.  It begins with this marvelous statement:

when brethren live together in unity!

It is an fitting choice to pair it with the story of Joseph forgiving his brothers.  Like Esau forgiving Jacob for cheating him out of his birthright and stealing his blessing, Joseph pardons his brothers for selling him into slavery years earlier.  It is not at all what we expect from a person so deeply wronged who now has risen to power.  We expect him to exact revenge, but Joseph surprises us by going in a different and more generous direction.  The unity he creates (as the psalm says) is “good and pleasant.”

The psalm uses two images to describe what unity is like: oil and dew.  Each holds special meaning for pilgrims.

Oil from olives was an important commodity in the dry climate of the ancient Near East and it was poured on the head for one of two reasons.  The more common use related to hair and skin care.  It was mixed with sweet smelling spices and drizzled on the head.  When a guest entered a house, the host poured some oil on the person to offer comfort and relief (Think about the 23rd psalm: “thou annointest my head with oil”).  Oil was also used to enthrone kings and consecrate priests, so it is significant that the psalm references Aaron, Moses’ brother, who was Israel’s first priest.  The oil runs down to his beard and to the collar of his robe.  Aaron’s priestly vestments include a necklace with twelve stones.  On each stone is written the name of one of the twelve tribes of Israel.  Oil poured so abundantly on Aaron’s head – whether it be as an act of hospitality or as a sign of consecration – falls symbolically on all God’s people, unifying us as we share in its meaning.

The psalm also likens unity to dew.  Very little rain falls in the Holy Land from April through October, but Mt. Hermon, located some 125 miles north of Jerusalem, was known to have heavy dew throughout the year, even in the dry seasons.  This moisture refreshed the region and kept it green during a time when vegetation in other areas withered.  The image of dew suggests unity has a way of refreshing and preserving those who live under its blessings.

Pilgrims singing this psalm as they travel to a religious festival often do so among members of their extended families.  The psalm reminds them of unity’s blessing when shared among siblings (brethren), but also within kindred relationships.  Once in Jerusalem its message and meaning extend to all people living under God’s covenant.  That Christians say this psalm on Maundy Thursday, at the institution of the Lord’ Supper, suggests to us the blessing of unity is to be shared among all people of faith.

If you have been joining us for Morning Prayer over the last two weeks, you know our assigned readings from the Old Testament have been taken from the Book of Judges.  We have heard one brutal, violent story after another and I struggle to find a single redeeming feature in any of them.  Israel’s understanding of what it means to inherit and then inhabit the Promised Land goes through some major changes over the centuries covered in the bible.

·    In the Book of Genesis God promises this land to Abraham.  It then tells his story and the stories of his immediate descendants.

·    Exodus and subsequent books tell the story of deliverance from bondage in Egypt and wondering 40 years in the wilderness, eventually reaching the outskirts of the Promised Land.

·    In the Book of Joshua Israel understands God wants them to kill all the indigenous people living in the Promised Land because there is no way for them to coexist peacefully without being corrupted.

·    In the Book of Judges God’s people share the land, but local conflicts are frequent.  When a gentile group prevails, Israel understands this to be punishment for sin.  Eventually, God raises up a judge who rallies the people to defeat the enemy.

·    This period gives way to the era of the kings – Saul first, then David, followed by Solomon, and so forth.   Israel now controls the Promised Land with gentiles living in their midst.  Israel understands it must remain pure by being true to its covenant with God.

·    The era of the kings ends with the destruction of Jerusalem and exile in Babylon.  Here Israel learns how to be God’s people without the Temple and without the Promised Land.

·    Upon returning from exile, Israel begins to understand God wants her to be a “light to the nations.”  Israel is to teach foreigners about God and be a living example of what God desires for all people.

It is a story of God’s people in transformation, discerning over time who God is and what God requires.  The understanding of the notion of unity is a part of this process.  It’s progression looks something like this:

And, once Jesus introduces Kingdom of God…

when people live as us!

Throughout this progression, the notion of unity and its blessings expands from siblings to extended family to clan to tribe to nation to all people.  We sense the blessing of unity when it is present in our family, in our church, in our community, in our nation, and in our world.  Conversely, we feel great pain when any of these circles is fractured or fragmented.  There is nothing good or pleasant about discord.

And there is a lot of discord in our country right now.  We are not united in our politics, in our response to the pandemic, or in the call for social change.  Where do you see yourself and how you are approaching those who differ from you:

The pilgrims didn’t walk to Jerusalem to pick a fight.  They wanted to experience the blessing of peace.   Joseph forgave his brothers and this act of kindness restored his place in the family and in his father’s life.    Where in your life is unity lacking and what might you be able to do to foster it?

Posted by Keith Emerson at 11:34 AM No comments: