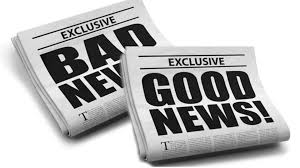 I am a fan of “Good News/Bad News” jokes, so imagine my joy when I came across this genre of about ministers:


The Good News: You baptized seven people today in the river.  The Bad News: You lost two of them in the strong current.


The Good News: The Vestry accepted your job description the way you wrote it.  The Bad News: They were so inspired by it they formed a search committee to find somebody capable of filling the position.


The Good News: Church attendance rose dramatically the last three weeks.  The Bad News: You were on vacation.


The Good News: The Vestry voted to pay your airfare for an oversea mission trip.  The Bad News: They are stalling with the payment until war breaks out in the country.


John Brandon is a contributing editor for Inc.com.  He wrote an article for Inc about how people react to bad news.  In it he describes these scenarios:


The client just called.  He is not going to renew.


At a tech conference, your boss tells everyone in the group you are not pulling your weight.


You come back to your desk to find a pink slip.


What do you do when you receive bad news?


I know many of you have sat in your doctor’s office and heard her say, “The tests came back and I have some bad news…”  I remember in 2007 and 2008 how common it was to turn on the TV and hear “There is more bad news today about the stock market.”  We got some bad news at St. Paul’s two weeks ago and it came in the form of a broken pipe and water cascading down from the kitchen ceiling.


What do you do when you get bad news?


In the Gospel of Mark, before Jesus begins his public ministry he hears some bad news.  He learns John the Baptist has been imprisoned by Herod Antipas, the Roman tetrarch of Galilee.  John publically rebuked Herod for his many faults and moral failings; a lengthy list to be sure, which includes marring his brother’s wife.  John’s scathing criticism lands him in prison and Jesus must know it will not end well.


Just a few verses earlier in Mark’s gospel Jesus makes a long pilgrimage from Nazareth to the Jordon River to be baptized by John.  After this the text tells us he goes into the wilderness for forty days.  Then Mark says, “After John was arrested…”  He doesn’t tell us how much time has passed, only what Jesus does next is in response to this bad news.


Mark says, “After John was arrested, Jesus came to Galilee.”  So Jesus returns to his home region, to an area ruled by the very person who has John imprisoned.  If this does not seem wise to you neither will what Jesus does next.  Jesus himself begins to speak publically.  Mark tells us that in response to the bad news of John’s arrest, Jesus proclaims “the good news of God.”


Perhaps you battle a natural urge to shutdown in the face of bad news.  It is easy to feel overwhelmed and overmatched.  When the kitchen pipe broke and gallons upon gallons of water was falling from multiple places in the church’s newly remodeled kitchen and pantry I was aware I was not dealing with it well.  I was also aware of six or seven people around me who were.  They captured water in trashcans, called the fire department to get the water shut off, and, once the water stopped, began to clear off counters and shelves in order to dry off every wet thing and surface.  For the most part, I stood by in a fog contemplating the disaster at hand and wondering how much havoc is was going to wreak on the schedule of events involving the kitchen.


What do you do when you receive bad news… give up or get going?


One of the worst days of my life was when I was ousted from a corporate job.  I drove home that night and my wife came up with the idea of being a writer.  I jumped into action.  I’m not saying I was all that confident at the time, but it was a lesson for me.  I pounded the pavement for weeks and months.  I reacted [to bad news] with action.  It’s a good thing, because I’ve been writing ever since.


I am consistently impressed with how members of this parish refuse to take bad health news laying down.  You educate yourself about various diagnoses, treatment options, community resources, and all the things you can do to put yourself in the best position to be healthy and cured.  And once you are healthy and cured you find ways to reach out and support others who are just beginning the journey after receiving their bad news.


A team of psychologists studied why some people react to bad news with confidence while others do not.  They determined people quit when they are uncertain about their own ability to produce a desired result or when they are uncertain their actions with will lead to a desired effect.  They offer two definitions that, while technical, are insightful.  The first is world-certainty and uncertainty:


We define world-certainty as the feeling that desirable outcomes can be achieved and undesirable ones avoided because the path connecting means and ends is clearly predictable and stable.


The more you understand the situation the more confident you are taking action.


The second term is self-certainty:


The more you believe in yourself the more likely you will initiate an effort to make a situation better.


We people of faith might add to these God-certainty.  We believe God is engaged with us and at work in this world to create a community where God’s dream for all people and all creation is normative.  This is what we call the good news.  And we people of faith are certain God’s good news may be challenged by the world’s bad news, but it is never overcome by it.


The comedian Tracy Morgan observes “Bad news travels at the speed of light; good news travels like molasses.”  For Jesus, bad news sparks the opportunity to proclaim good news.  He launches a ministry to preach and teach God is good and gracious and God is with us and for us.  Jesus invites others to follow him, people who find his vision of life so compelling they drop everything they are doing to learn more about it.  Eventually they make it their personal mission to proclaim this good news as far and wide as humanly possible.


We are a people of good news.  For some time I have struggled with the image of the kingdom of God because (1) we don’t live in the kingdom so it is difficult to connect with this idea and (2) kingdom seems to imply everyone is a part of it and clearly there are many disinterested in God’s sovereign reign in this world and claim on their lives.  More and more I am warming up to the image of community as a better way to envision God’s presence in the world.  We at St. Paul’s are a community of God’s people who proclaim the good news through what we say and what we do.  We live it with and for one another and as a witness to the world.  And we invite and welcome everyone to be a part of our fellowship of God’s good news.
Posted by Keith Emerson at 10:40 AM No comments: