From Temple to Table 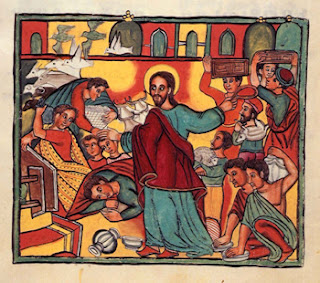 Each of the four gospels describes an event when Jesus confronts the people who make a livelihood at the Temple by exchanging currency and/or selling animals or doves for sacrifices.  Matthew, Mark, and Luke (known as the Synoptic Gospels because the synopsis of each is so similar) report this transpires at the Passover festival just before Jesus is arrested and put to death, although they disagree on when it takes place (either Palm Sunday or the following day).  Each of the three states Jesus’ objection, “My Father’s house is to be a house of prayer, but you have made it a den of thieves.”

John’s version contains many of the same elements – the timing of the festival, the location of the Temple, and Jesus’ actions against the traders.  But John’s version differs from the other three in at least two key ways.  First, he places it at the beginning of Jesus’s public ministry, rather than at the end.  In fact, the Synoptics indicate Jesus’ attack on the Temple system is what leads to his arrest and crucifixion.  John, however, traces the motivation for arresting Jesus to raising Lazarus from the dead, thus, for him, the Temple episode reflects something else.

The second difference in the accounts is subtle, but also telling.  While the Synoptics have Jesus using the phrase “den of thieves”, thus criticizing the corruption of what is transpiring, John records Jesus as saying, “Take these things out of here.  Stop making my Father’s house a marketplace.”  “Marketplace” verses “den of thieves”.  In John, Jesus is not attacking the fraudulent behavior of a few, he is condemning the entire system – even those whose business practices are marked by honestly and integrity.

One more aspect of John’s account stands out: the challenge to Jesus by the religious authorities: “What sign can you show us for doing these things?”  In other words, “What gives you the right?”  Jesus responds in a way we understand, but the original audience did not: “Destroy this Temple and in three days I will raise it up.”

The crowd caught in the confusion of marauding animals and merchants scurrying about for their coins cannot begin to fathom how Jesus can rebuild a structure which required generations to erect.  But the first readers of John’s gospel (written around the end of the first century) know two things the people in today’s story do not.  First, the Temple was completely destroyed by the Romans in 70 AD.  Not one stone was left on top of another.  And second, the crucified Jesus rose from the dead after three days.  So for John, given the loss of the centralized place of Hebrew worship and given the presence of the God’s Word incarnate, Jesus’ actions in the Temple at the beginning of his public ministry indicate a shift from religion focused on a structure and an institution to religion based on a relationship with an individual.  Archbishop Curry is fond of referring to this new type of religion as “the Jesus Movement” and “The Way of Love.”

Something interesting always happens when a church or a synagogue has its worship space destroyed, most commonly due to a fire.  The congregation is forced to meet in a different location, perhaps the parish hall or in a neighboring church.  It seems to result in one of two things.  Either the congregation folds or it comes back stronger than before.  Either it cannot overcome the loss of its institutional space or it discovers anew its rootedness in relationship with Jesus, with its surrounding neighborhood, and with one another.

Many American churches were on shaky ground before the pandemic impeded our ability to worship together in-person.  The professionals who study congregational vitality suspect these last twelve months will only serve to accelerate the closing of churches whose viability was already suspect.  But other faith communities will emerge from this time poised with new purpose and a sense of what is possible.  For these faith communities, the time apart has fostered in them the desire to embrace innovative ways to be in relationship with God and one another.  It is a passion promising to spill over into congregational life as we emerge from this time of physical isolation.  When I consider where St. Paul’s is at, and especially as I reflect on the focus of our Vestry leadership, I can say with confidence we are on the second track.

The first readers of John’s gospel knew well the experience of religious homelessness.  After Jesus’ ascension, his original followers and their initial converts understand themselves to be Jews who found the long-promised Messiah.  They continue to make pilgrimages to the Jerusalem for major festivals and in most ways appear no different from other Jews.

Like all Jews, when the temple is sacked, Messianic Jews have to develop new rites and practices to replace what has been lost, just as non-Messianic Jews have to do.  Both groups find a new home in the local synagogues and initially both groups coexist peacefully in the same place.  Yes, the two camps have different ideas, but Christians see themselves as a subset of a greater whole.  And Christians feel called to witness to their faith so there might be one flock under one shepherd.

Well, by the time John writes his gospel, this unspoken truce is taking on water.  More and more, synagogue leaders, who are comprised of traditional Jews, seek to banish or even persecute those who confess faith in Jesus.  As an aside, this context explains why John’s gospel has a more negative and condemning view of “the Jews” than we find in the Synoptics.

So, those first Christians lived through much disruption in how they experienced institutional religion.  At first they remain centered around the Temple.  Then they have to adapt to religion as experienced in the local synagogue.  Once expelled from this institution, early Christians begin to develop home churches, which focus on a Eucharistic meal and sharing Jesus’ love with the unloved.  What emerges is a ‘table fellowship’ where friendships are formed, the hungry are feed, and the Risen Christ is made known in the breaking of bread.  And while it lacks the grandeur of the Temple, it generates enough power to change the world.

The one constant through it all is Jesus.  His followers sense his presence no matter the setting or focus of their communal spiritual life.  It is a promise and a truth we are experiencing anew in our day.  A lot has changed in the last year, but through it all Jesus continues to shepherd us, to feed us, to comfort us, and to heal us.  Today we hear Jesus say, “Even if life in your physical space of worship is inhibited, I am with you to see you through.”