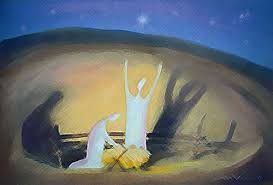 “Land of Zebulun, land of Naphtali…
…on those who sat in the region and shadow of death
light has dawned.”


Zebulun and Naphtali were two of Jacob’s twelve sons.  Like each of the sons, their offspring became a tribe and each tribe inhabited a marked region in Israel.  The tribe’s name, taken from the name of the original son, became the name of that region, much like we would give a name to a county or a state.  The tribe of Judah had the largest geographic region, which encompassed the entire southern half of the Promised Land.  All the other tribes’ regions were to the north of Judah and collectively are referred to as ‘Israel’ throughout the Scriptures.  The regions of Zebulun and Naphtali were located in the northernmost parts of Israel, in land the today encompasses area in Israel and in Lebanon.  It was then what it is now has always has been – a hot bed of conflict and unrest.


Zebulun and Naphtali were border regions; areas where different races and nationalities intermingled.  And because of their geographical location, they were always the first to be invaded whenever a foreign army was on the move.  Over a period of 700 years, the Assyrians, the Babylonians, the Phoenicians, the Greeks, and the Romans each marched through this region and either led off hostages into captivity or held it with an occupying force.  Freedom and tranquility were hardly the norm for those who lived in these lands.


Imagine what Buffalo is to weather, what Detroit is to public finance, and what Compton is to safety, roll it all together and you begin to get something of a sense of what it was like to live in Zebulun or Naphtali.  Well did the prophet Isaiah speak when he described these folks as living in darkness and a region overshadowed by death.


His original words find their context in the Assyrian invasion of 722 BC., a particularly devastating and brutal attack.  Isaiah dreamed of a time of reversal for these two beleaguered tribal lands.  He hoped for a fulfillment of Jacob’s original blessing of Zebulun; that his region (which was landlocked) would extend to the sea.  And Isaiah expressed this hope using the beautifully poetic and theological image of light.  There will be a time, he said, when gloom and anguish will be no more; a time when those who walk in darkness will see a great light.  And while Isaiah’s hope came to fruition when the Assyrian empire crumbled, the cycle of military conquest and violence continued unabated.


Seven centuries later a man by the name of Matthew set out to write a gospel – a very specific literary genre that arranges historical facts to convey a sense of deeper meaning.  His gospel tells the story of Jesus of Nazareth with the intention of letting the world know that he is the Messiah, the Son of God.  Reflecting on the fact that Jesus grew up in the region of Zebulun and Naphtali, Matthew discerns a deeper meaning.  He discerns that Jesus is the light shining on this region foreseen so long ago by the prophet Isaiah.


Let’s think about this for a moment.  Let’s think about the context in which Jesus was nurtured and formed.  Let’s think about how that setting might have shaped his life.  What was it like to be raised in this Buffalo/Detroit/Compton region?  What would it be like to grow up in an anxious and downtrodden community?  Do you remember what Nathaniel says when he learns where the Messiah is from: “Can anything good come out of Nazareth?”  It is a comment that both reeks with contempt for the people of this area, but also marvels that anyone could survive growing up in such an environment.


Surely this rugged upbringing was critical in formulating Jesus’ understanding of the kind of world God desires for all; a world Jesus called the “Kingdom of Heaven.”  And as we will see in coming weeks, Jesus’ own life and teachings are the light that shines the way for those of us living in darkness and gloom.  He invites us to live into his vision by means that are subversively countercultural, but not bent on insurrection.  It is a vision we have seen lived out in our own day by people like Gandhi, King, and Mandela; folks from rugged places that subverted oppression not through violence, but with an unflinching demonstration of compassion, forgiveness, and prophetic truth-telling.


If I were God and I was going to ask my child to enter this world in flesh and blood, it would make sense to me to place him in the best of all possible circumstances.  I would choose a tropical climate with a nice ocean view where sea breezes are plentiful.  He would be raised in a family of wealth, intellect, and power – a Kennedy or a Clinton or perhaps a Bush.  He would be educated at the Hassidic equivalent of an Ivy League school.  In short, he would have every advantage possible in life so as to be positioned to make a tremendous impact.


Obviously, that is not how God works.  God’s light is lit in and dawns first on a hardened area at a difficult time (just after John the Baptist is arrested).  Those first drawn to it are not the brightest and the best, but the tried and tested: fishermen who have eked out a living amidst the same challenges Jesus has known all his life.  It is from this meager and unlikely beginning that the world will be changed and the world will be saved.


Two weeks ago I quoted Evelyn Underhill who said that our lives are spent conjugating three verbs: to want, to have, and to do – craving, clutching, and doing.  She says we miss the central fact that the most important verb in life is to be.  It is our being that matters, not what we want or have or do.  Last Sunday I said something that may seem diametrically opposed to this, that Christianity is neither a noun nor an adjective, but rather is a verb (and an action verb at that).  I reconcile the two statements by holding that our being in God leads us to doing in God’s name.


Today I want to add something to this, something about light.  A few weeks ago I downloaded the album Live in London by Leonard Cohen, a Canadian born singer and songwriter.  Every song of this concert performance is a treat, as is the way Cohen’s personality comes through throughout the show.  One of my favorite songs is titled “Anthem” and Cohen introduces it by saying the words of it is refrain:


Ring the bells that still can ring
Forget your perfect offering
There is a crack, a crack in everything
That’s how the light gets in.


I like that.  Do what you can do and don’t worry that it isn’t perfect.  Nothing is.  God shines through everything you do, but especially when you act even though you are weak and broken.


Some of us here this morning grew up in a place just like Zebulun and Naphtali.  For others, we know this region not from living in it, but rather by living with it.  It is a place in our heart or in our soul or in our mind or in our body.  I’ve said before how much I love the line by Hemmingway that the world breaks everyone, but afterward some become strong in the broken places.  The cracks let in the Light and the Light shines forth from the darkness and gloom.  I hope you know this to be true in your life.  I know I do in mine.  I know what it is like to live with Zebulun and Naphtali and I know the joy of God’s new Light dawning.


Jesus called his disciples and invited them to fish for men and women and children… in essence he invited them to be agents of his Light.  He chose them not because they were perfect or proper or well-positioned in life, but because they were from Zebulun and Naphtali.  They were cracked, but that is how the Light got in.  If Christianity is an action verb, perhaps you have sat on the bench because you know yourself to be an imperfect or broken vessel.  Well, guess what, it is precisely because you are broken and imperfect that God loves you and wants to use you.  Let the Light shine on the darkness and deep gloom of your life and then allow it to shine forth from you.