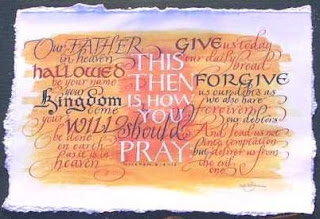 
The more you say the Lord’s Prayer the more you will come to believe it.  And the more you believe it the more you will be shaped by it.  You will recognize God’s closeness while acknowledging God’s sacred holiness.  You will determine not just to wait for the life to come, but work to make it present here and now.  You will affirm our need for God’s goodness and for each person’s contribution to the common good.  You may struggle to forgive, but you will always recognize it as the goal.  You will put your life in God’s hands and trust in the Holy One to guide you to green pastures and still waters.  Lex orendi, lex credendi – this is how the Lord’s Prayer shapes us.
Posted by Keith Emerson at 12:33 PM No comments: