A Command... to Love One Another 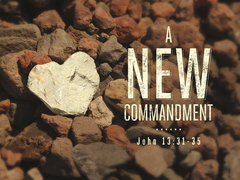 Here is a true story from a former parishioner in Richmond. This past week was Dwight’s birthday. He is the father of three very rambunctious boys. Just as he was about to blow out the candles on his cake the oldest stopped him. “Dad, what are you going to wish for?” “Hummm,” he said reflectively, “I can’t decide. Either a plush, green lawn free of weeds, or a head full of hair, or an evening where my boys get along and don’t argue or wrestle.” The oldest thought for a moment and then said, “Better go with the green grass.”


If you grew up with a sibling or two, chances are your parents admonished you on more than one occasion to get along. I have two sisters and during our childhood it was always two against one, although the allegiances were never fixed hard and fast. Our bickering and harsh treatment of one another was a terrible source of frustration for our parents and more than once they laid down the law that we had to stop fighting.

Being ordered to be nice is perhaps the least productive way to accomplish a change in behavior and yet that is what Jesus does in today’s gospel reading. Do you recognize the setting? It is Maundy Thursday. Jesus has gathered his followers in the Upper Room. They are eating the Passover meal. Jesus has shared with them the bread and wine of his body and blood. He has washed their feet… all of them; even Peter’s, who protested, and even Judas’, who was about to betray him. Then he tells them this: “I am not going to be with you much longer, so listen up. I am giving you a new commandment… love one another as I have loved you.”

Did you watch the college men’s basketball tournament last month? If so, you know that Louisville won the championship after Kevin Ware, one of their players, suffered a gruesome broken leg during a nationally televised game. The nature of the injury shocked everyone, especially Ware’s teammates who cried openly while he was being treated on the court. They came to his side as he was taken from the arena and Kevin had one thing he wanted to tell them: win the championship. In effect his message was ‘if you care about me, honor me by winning it all.’

When Jesus tells his followers to love one another as he loved them he is letting them know what they have to do if they want to honor him: “The love that you have for me you must now demonstrate in the way you treat one another.” But make no mistake about it, the ‘commandment’ part of what Jesus said is important too. Yes, each disciple wanted to honor Jesus, but he could hardly have picked a more challenging way for them to do it.

You see, the disciples were anything but a homogenous group. There was a former tax-collector (read, capitulator with the occupying Roman government) and a zealot (read, insurgent bent on overthrowing the government). There were folks from Nazareth and there was Nathaniel, an educated elitist who believed people from Nazareth were backwater hicks. One disciple was a doctor, several others were fishermen. Think of it as white collar verses blue collar. There was Peter – older, boisterous, impetuous – and there was John – a quiet, reflective youth. As a group they were given to bickering about who among them was the greatest. The mother of two brothers lobbied for her boys to receive special honor in Jesus’ kingdom. As a group, they were not predisposed to love one another by virtue of similarity, nor where they inclined to love one another because they were told to do so.

And yet they did. Through the power and the grace of God they became a people whose love for one another overflowed into a love for the whole world. In and through their actions the Gospel of Jesus Christ became a message and a force that could not be stopped.

When I look at the church today (and when I look at myself) I recognize how it is easy for us to love as Christ loved those people with whom we are naturally affectioned and find easy to love. And I recognize in the church (and in myself) how difficult it is to love as Christ loved those people who are greatly differnet from us or who have challenging personalities.

One year to the day before he was assassinated, Martin Luther King gave a speech at Riverside Church in New York City to a group of clergy and laity concerned about the war in Vietnam. For King, the war was a symptom of a deeper malady in the American spirit and he called on each of us to turn away from the “militarism and violence” inside ourselves:

“This call for a world-wide fellowship that lifts neighborly concern beyond one’s tribe, race, class, and nation is really a call for an all-embracing and unconditional love of all men. This oft-misunderstood and misinterpreted concept so readily dismissed by… the world as a weak and cowardly force – has now become an absolute necessity for the survival of man. When I speak of love I am not speaking of a sentimental and weak response. I am speaking of that force which all the great religions have seen as the supreme unifying principle of life. Love is somehow the key that unlocks the door that leads to ultimate reality.

Let us hope that this spirit will become the order of the day. We can no longer afford to worship the god of hate or bow before the altar of retaliation. The oceans of history are made turbulent by the ever-rising tides of hate. History is cluttered with the wreckage of nations and individuals that pursued this self-defeating path.”

King went on to quote Arnold Toynbee, who said, “Love is the ultimate force that makes for the saving choice of life and good against the damning choice of death and evil. Therefore the first hope in our inventory must be the hope that love is going to have the last word.”

King’s words, from a different time with a different struggle, still seem to say something challenging in our day. He calls on us not to domesticate Jesus’ new commandment into something as tame as ‘neighborly concern’, although this is an aspect of how we live into the commandment. The love that King lifted up is more risky, more costly, and ultimately more victorious. It transforms the world first by transforming us.

“The soul is weighed in the balance by what delights her. Delight or enjoyment sets the soul in her ordered place. Where delight is, there is the treasure."

We can be sure that Jesus’ disciples did not delight in loving one another. At first, it was something they did simply because they were told to do so. But the funny thing is that sometimes the heart has a way of falling in line with the hands and the feet. In other words, act out of love often enough and at some point you will find yourself being filled with love.

John Ohmer, a colleague of mine in the Diocese of Virginia, now serves as rector of a parish that had left the diocese a few years ago. Many chose not to leave, some have come back, and together they are forging a new path for this historic congregation. Here is how John describes who they now are and what they do:

“Speaking at least for The Falls Church Episcopal, we really mean it when we say ‘the Episcopal Church welcomes you’ – we mean absolutely everyone: gay or straight, conservative or liberal, Democrat or Republican, young or old, rich or poor, divorced, married, single, black, white, Latino, Asian, full-of-faith or full-of-doubts, lifelong Christian or never having stepped foot in a church in your life. It doesn’t make any difference because we don’t define ourselves by our differences – we define ourselves by what we have in common – and that’s our faith in God, love for one another, and service to the community.”

That parish, like ours I think, is stretching itself far beyond the easy love of neighborly concern.

Had it been Jesus’ birthday at the Last Supper, and had a disciple asked him what he was wishing for before he blew out the candles, Jesus might just have said, “That you all will love one another as I have loved you.” “How about we keep your vineyard weeded and pruned,” the disciple might have said back.

But as it is, Jesus did not make a wish, he gave a command. It is so tempting to make this one easier to follow by removing its teeth. We neuter it and make it palitable, but in the process rob it of its ability to transform the world and to transform us. The victory of Christ over sin and hate is watered down to just being pleasant. And being pleasant didn’t win the world for Christ nor does it strike me as worthy of commanding when it is little more than demonstrating nice manners. No, the love that Jesus shows each one of us demands nothing less than putting our old nature and our old ways and our old self to death so that we might live for him who died for us. If we take the commandment seriously it will be the most difficult thing we do in life, but also the best. In time, through the grace of God, what begins as command will become our delight and in the process it will change the world around us.

Posted by Keith Emerson at 9:19 AM No comments: