Rest in Peace and Rise in Glory 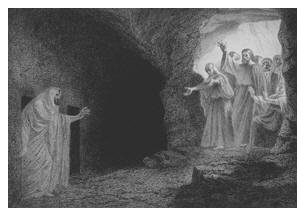 Some very famous people have made some very famous pronouncements about themselves.  The English playwright Somerset Maugham said of himself, “I am the measure of all things.  I am the centre of the world.”  Winston Churchill observed about himself, “I am certainly not one of those who need to be prodded.  In fact, if anything, I am the prod.”  Jim Morrison, lead singer of The Doors, said, “I am the lizard king.”  Reggie Jackson said of his role on the New York Yankee’s, “I am the straw that stirs the drink.”


For his listeners, these self-descriptions are consistent with their experience of Jesus.  He is like a good shepherd.  He has illuminated their lives.  He has feed them.  He has shown them the way and taught them truth.  He has brought them together and nourished them as a vine nourishes its branches.  These claims point to how truly remarkable Jesus is.  He is special.  He is sent from God.


But the seventh statement is different from the rest.  “I am the Resurrection and the Life.”  Unlike the other six metaphors, you can’t sort of be like this.  Either you have the power of resurrection and life or you do not.  In uttering these words to grieving friends Jesus puts himself in a position of having to back up the claim he makes about himself.


Belief in a resurrection seems to have started some 400 years before Jesus’ life.  While its exact origins are unclear, most likely it is rooted in real-life near-death experiences.  A person thought to be dead and gone suddenly recovers.  That person’s account of what he or she experienced while ‘dead’ would have been as intoxicating as the stories we hear from people with similar experiences in our own time.


In Jesus’ day the notion of the Resurrection, which literally translated from the Hebrew means “the standing up again of the dead,” is a hotly debated theological concept.  Within Judaism at the time, there are entire sects and movements that hold in contempt those who believe in the resurrection of the dead.  And within those groups believing in it, there is significant division around any number of questions: Who will and who won’t be resurrected?  When will it happen?  Will it happen for everyone all at the same time or individually?


Mary and Martha hold to a very specific faith and understanding.  For them, those who die are asleep.  This is a way of saying the time between death and the resurrection of the dead passes peacefully and quickly.  The resurrection will be a one-time event when those who have died will “awaken” in a renewed, physical body.  It is out of this belief we have developed the liturgical expression, “rest in peace and rise in glory.”


Jesus responds to Martha’s statement of faith by saying, “I am the resurrection and the life.  Those who believe in me, even though they die, will live, and everyone who lives and believes in me will never die.”  It is a remarkable claim.  Jesus says he is the one who oversees the life/sleep/new life event.  Martha affirms she believes this about him.


Jesus goes to Lazarus’ tomb.  Even though he believes he will give life to his friend by awakening him from his death/sleep at the resurrection, Jesus nevertheless is deeply grieved.  Perhaps this explains what he does next.  Or perhaps he senses the need to demonstrate just this once what his role will be on that day.  Jesus clearly believes he is calling his friend from death’s sleep.  And while Lazarus does not rise with a resurrected body, it is obvious to all who witness the event what has happened.  The verse at the end of today’s reading states: “Many of the Jews therefore, who had come with Mary and had seen what Jesus did, believed in him.”


But some of them went to the Pharisees and told them what Jesus had done.  So the chief priests and the Pharisees called a meeting of the council, and said, “What are we to do?  This man is performing many signs.  If we let him go on like this, everyone will believe in him, and the Romans will come and destroy both our holy place and our nation.”  But one of them, Caiaphas, who was high priest that year, said to them, “You know nothing at all!  You do not understand that it is better for you to have one man die for the people than to have the whole nation destroyed”…  So from that day on they planned to put him to death.


It is a report dripping with irony as they plot to put to death the one who has the power of life.  And they will accomplish this is short order as Jesus raises Lazarus just one week before the Passover.  Jesus will suffer the excruciating death of crucifixion on a cross.  He will die, but rise again from the sleep of death in a resurrected body.


Let every man and woman count himself immortal.  Let him catch the revelation of Jesus in his resurrection.  Let him say not merely, “Christ is risen,” but “I shall rise”.


Jesus said, “I am the resurrection and the life.  Those who believe in me, even though they die, will live, and everyone who lives and believes in me will never die.”
Posted by Keith Emerson at 10:19 AM No comments: