We People of the Incarnation 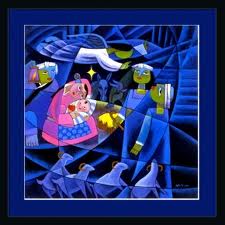 In his book, The Hour of the Unexpected, John Shea relates the story of Jesus’ birth as told by five-year-old Sharon; a little girl sure of her facts and moved by their meaning:

They were so poor they had only peanut butter and jelly sandwiches to eat and they went a long way from home without getting lost. The lady rode a donkey, the man walked, and the baby was inside the lady.

They had to stay in a stable with an ox and an ass (hee-hee) but the Three Rich Men found them because a star lited the roof. Shepherds came and you could pet the sheep but not feed them.

Then the baby was borned. And do you know who he was? The baby was God!

Shea writes that after Sharon said this, she jumped in the air, whirled round, dove into the sofa and buried her head under a cushion. That, he says, may be the most appropriate response to the Good News of the Incarnation.

On the first Sunday after Christmas we always read from the prologue of John’s Gospel:

The spirituality of most traditions in the Christian faith tends to gravitate toward one of the major events in the bible. Lutherans, for example, have a spirituality rooted much more deeply in Good Friday and the Cross than we Episcopalians do, at least in my experience. Charismatics are people of the Spirit – Pentecost Day. There are traditions rooted in the giving of the law, the Ten Commandments, and there are those rooted in Paul’s conversion. Perhaps more than any other tradition, we Anglicans are rooted in the Incarnation. We are a people whose spiritually is forged by God’s decision to take on our human nature and to live in our world.

God becoming flesh is a sign of God’s love for all that God has made. It is an indication that our fragile, foible, human form is a capable container of all that is good and right and holy. It says that creation is precious to God. The Incarnation demonstrates that God is not aloof or unhappy, but desires to reside in this world and to reside with us.

Being rooted in the Incarnation has deeply affected Anglican thinking. We long ago rejected the Calvinist doctrine that humanity is totally depraved; so fallen and wicked that we do not even possess the ability to respond to God’s message of grace and love. We embrace the idea that human activity and human initiative is infused with goodness and potential because we are created in the image of God. Music, art, literature, dance, poetry, film, design, craftsmanship, gardening can be and often are human expressions of divine holiness. Human projects such as science, medicine, accounting, engineering, and agriculture pick up on the way God has ordered creation and, in so doing, advance the quality of human life. We believe that the Word became flesh not so much to give us one last warning, and not so much to extend to the fallen one final opportunity to grab an eternal life preserver, but to show us God’s true self and to show us how to live into the fullness of our humanity.

We proclaim that the Word became flesh. We do not proclaim that the Word became a holy book. We Anglicans have a high regard for Scripture and a distinctive way of approaching it. First and foremost, we emphasize reading it in the context of public worship. Doing so shifts our focus from discerning what doctrines it might teach to how it speaks to human needs and hopes. We don’t see the bible so much as being a detailed, divine blueprint for how the world should function, but rather (in the words of William Countryman) “as a promise, a gospel, even perhaps a letter from a dear friend.” It works on us more through kindness than through fear. And while we revere the bible, we are aware that it has a human element to it. (Again Countryman says) “It is the Word of God, but that does not necessarily mean that it is God’s words. Always the bible is second to the incarnate Word.” Why do we hold this? Well, to quote little Sharon, God became a baby. God did not become a book.

“The Word became flesh.” In a recent editorial, the award-winning, New York Times columnist Maureen Dowd explored a question that must surely be on the mind of many: Why does God not prevent debilitating illness and horrific acts of violence? She looked to author and priest Father Kevin O’Neil for insight and understanding. In Dowd’s column, O’Neil recounts stories of being with others during a time of loss and he relates how others where with him when he was at a similar place of need. Listen to how he reflects on these experiences:

For whatever reason, certainly foreign to most of us, God has chosen to enter the world today through others, through us. We have stories of miraculous interventions, lightning-bolt moments, but far more often the God of unconditional love comes to us in human form, just as God did over 2,000 years ago.

I believe differently now than 30 years ago. First, I do not expect to have all the answers, nor do I believe that people are really looking for them. Second, I don’t look for the hand of God to stop evil. I don’t expect comfort to come from afar. I really do believe that God enters the world through us. And even though I still have the “Why?” questions, they are not so much “Why, God?” questions. We are human and mortal. We will suffer and die. But how we are with one another in that suffering and dying makes all the difference as to whether God’s presence is felt or not and whether we are comforted or not.

Father O’Neil may be a priest in the Roman Catholic Church, but his incarnational thinking is one we Anglicans can celebrate. The Word became flesh in its purest, fullest form in the person of Jesus. We find that the Word still comes into this world, not so much, for us at least, by quoting the bible to people and attempting to explain to others how it contains all the answers to their questions, but when we allow God’s goodness and love and beauty and peace to abide in us and then are willing to let it fill the space we occupy with others. Surely you have sensed God being present through the efforts of another person. Perhaps you have recognized God being present to another through your own efforts. These are powerful experiences and as a priest I can only do what I do by being confident God will be incarnate through my work, poor though it may be.

We are people deeply rooted in the Incarnation. It shapes how we understand life, the world, humanity, the bible, and care for one another. These twelve days of Christmas are at the heart of who we are as a people of God. This hopeful, positive approach to the faith is something we Anglicans embody in a distinctive way through our spirituality. It is one way God uses us to bless to the world.

Posted by Keith Emerson at 10:22 AM No comments: