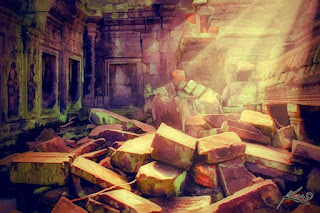 Not long after I was ordained I organized an alumni gathering in the Diocese of Ohio for clergy who had graduated from the Virginia Seminary.  Forty-some folks attended the event, which included the school’s development director who updated us on the latest developments on “The Hill”, as the school is affectionately known.  I was proud for orchestrating the event and must admit I was feeling pretty good about myself as we settled in to listen to the talk.  He began by saying something like…

“God has used Virginia Seminary since its founding in 1823 for a variety of purposes, including theological education to prepare persons [like me] for ordained ministry in the Episcopal Church.  Of course (he continued), there will come a day when God will no longer need the seminary and it will cease to exist.”

What!  I was absolutely floored at the thought of my school coming to an end.  It hardly seemed the right note to strike at an event intended to fire up alumni.  But, the more I thought about it, the more I realized his statement was true.  Nothing lasts forever, save the Kingdom of God.

Today, this 25th Sunday in the season of Pentecost, is the penultimate Sunday in the Church Year… and its focus is on endings.  All things, save the Kingdom of God, one day will end.

As they are leaving the Jerusalem Temple, one of Jesus’ followers observes, “Teacher, look at how big these stones are.”  And some of the stones indeed are huge!  One of the largest remaining today is nearly 40 feet long, 8 feet wide, and 4 feet tall.  It is estimated to weigh about 80 tons.  The Temple certainly is the most impressive structure Jesus and his followers ever see, and yet Jesus responds, “There will come a day when not one of these stones will be left standing on top of another.”  One day it will be here and the next day it will cease to be – a stunning prophecy which unfolds some forty years later.

Given some time to absorb what he says, his disciples ask Jesus what signs they will see before the destruction happens.  He responds with apocalyptic imagery, similar to what we hear in today’s first reading from Daniel.  Most of us tend to think of apocalyptic writing (such as what we find in the Book of Revelation) to be all gloom and doom, but actually it is rooted in hope: the faithful will endure, your name is written in the book of life, God will give you what you need.  And from today’s reading, we learn endings are never the end, rather a pathway to a new beginning.

Did you catch the last thing Jesus says in the lesson?  After stating there will be wars and earthquakes and famine, he says these things are nothing more than “birthpangs.”  Birthpangs – a brief moment of significant pain necessary to usher in new life.

William Bridges developed a model for approaching change which he describes in his 1991 book Managing Transitions.  Change, he notes, is something that happens all the time, whether we like it or not, whether we want it or not.  It can transpire rather quickly, unfold over time, or lurk in the distance.  Transition, Bridges contends, is an internal process.  It is what happens inside a person who is undergoing change.

Bridges’ model highlights three stages of transition we go through as we experience change:

The first stage is often marked by resistance and emotions such as fear, denial, anger, sadness, disorientation, frustration, uncertainty and a sense of loss; especially if a person is being forced to let go of something he or she rather would not.  Acknowledging your feelings, especially if they are negative, is a key element in the process of moving on.

The second phase – the Neutral Zone – is a bridge between the old and the new.  People in this phase tend to be confused, uncertain, and impatient.  They may also be resentful of what is emerging because of what it costs (think of a teenager who is forced to move across the country when a parent takes a new job).  Morale and energy are low in the Neutral Zone, while anxiety is high.  Still, it can be a great time to experiment and to try new things (think about all the ways our church has adapted during the pandemic).

The New Beginning stage is a time of acceptance and energy.  People have developed the skills necessary for a new environment.  They begin to sense the best parts of the past are remembered and celebrated and some even are integrated into what is emerging.  The final phase is marked by individual’s renewed commitment to the group and one’s role in it.

Bridges’ Transitional Model helps us to make sense of where we are in the midst of this pandemic.  Early on we were fearful, anxious, angry, sad, disoriented and full of all the other emotions Bridges says are common in the first phase of Losing, Ending, and Letting Go.  Twenty months later we find ourselves in the Neutral Zone.  We are confused, impatient, and resentful.  Morale is low in many quarters.  The Third Phase – the New Beginning – is still in the offing.

We are becoming more aware there is no going back to the way things were.  That day has ended.  No amount of fighting this reality will make it not so.  No attempt to fix it what has changed will reverse what has happened.  Our focus and our energy need to be on building something new.  We are in the midst of birthpangs.  Rest assured new life is coming; a New Beginning will happen.

Much has changed here at St. Paul’s, but I am really pleased with how we are transitioning.  We have learned much from success and failure and are adapting well to our new reality.  Folks have remained positive and supportive, being grateful for what is possible rather than carping about what is not.  As the New Beginning emerges, we will be positioned to offer a real gift to our community.  We will be able to embody what it looks like to live with joy and peace in harmony with one another, even in a world very different from what has been lost.

One of the things I like about today’s readings is how when Jesus says not one Temple stone will be left on another the disciples do respond by asking how they can prevent it from happening.  Their focus is on when it will happen and how they should respond to it when it does.  How should they respond?  Jesus tells them to think of it as being like birthpangs.  Every ending, he tells them, is followed by a new beginning.


Posted by Keith Emerson at 1:34 PM No comments: