The Source from Above 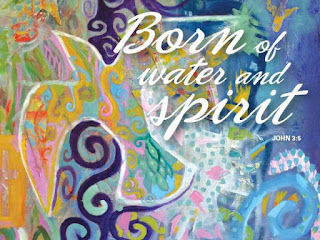 Jesus said to Nicodemus, “For God so loved the world that he gave his only Son, so that everyone who believes in him may not perish but may have eternal life.  Indeed, God did not send the Son into the world to condemn the world, but in order that the world might be saved through him.”

I am a big fan of the Turner Classic Movie Network – TCM.  I record interesting movies and watch them at my leisure, but I have more recordings than I could possibly watch in a year.  The other night I watched the Robert Duvall film The Great Santini, first released in 1979.  I had not seen it before and enjoyed it very much.  In one scene, Ben, who has just turned 18, is reading a birthday note written by his mother.  It is her loving voiceover we hear as he reads:

Wherever you go and whatever you do you walk with my blessing and love.  I’ve had my regrets and many sadnesses but I will never regret the night you were born.  I thought I knew about love – the boundaries of love – until I raised you for these past 18 years.  I knew nothing about love.  This has been your gift to me.  Happy birthday.  Momma.

“I thought I knew about the boundaries of love…”  What a tremendous phrase!

I was an uncle long before I was a father.  I am blessed to have six wonderful nephews and nieces, each of whom I got to hold as babies.  It was pleasant enough (as long as nothing inside them came out and onto me), but nothing life-changing.  However, when my first daughter was born, the very moment the nurse first handed to me I was overcome with a kind of love I never knew existed.  I was transformed in an instance.  I have had some pretty powerful moments in my life (multiple graduations, getting married, being ordained to diaconate then to the priesthood) but nothing compares to that moment.  Before this, I thought I knew about the boundaries of love, but I knew nothing about it at all.

John Henry Jowett was born in England in 1864 and went on to be ordained in the Congregational Church.  Before dying in 1923 he served in several prestigious positions and was known as “the greatest preacher in the English-speaking world.”  In one sermon titled The Boundless Love of God he begins by considering how we can become lost “in the overwhelming sense of the immeasurable.”  After exploring a few of possibilities Jowett says this:

He goes on to compare God’s love to a diamond devoid of any flaw or tint.  Of human love he says this:

But, in Jowett’s mind, God’s love is different:

Jowett then compares God’s love to various properties of water.  One way is this:

If Jowett is correct in this than we might want to ponder the source of our love.  For some, the source of love is rooted in the romantic.  For others it is rooted in a philosophical ethic, such as do the most good you can while producing the least harm.  For a few it is a narcissistic transaction where what passes as love is offered only as long as the other makes you feel better about yourself.  Each of these and other sources generates a love with boundaries.   God’s boundless love offers to take us far higher than possible through any other source.

The boundaries of love are evident every morning when I wake up my computer and check out the overnight headlines.  Mass shootings, political squabbling, racial tension, and downright awful behavior congregate on a near daily basis.  We live in a world far removed from God’s dream and not even close to the love I felt when I held my first child for the first time.  And yet every now and then we get a glimpse of what life can be like when the source of love comes from Above.

I was a Mike’s Meats yesterday picking out something yummy for tomorrow’s dinner.  It was crowded and the checkout line was long… and slow.  I noticed the woman in front of me already had her food in a bag and was holding a receipt.  Then her husband came in from outside and joined her in line.  Something, I thought, is up.  When it was their turn at the register I heard them explain the cashier had bagged but failed to ring up five items totaling about $25.  They came back into the store, stood in line (again!), and wanted to pay for the uncharged items.  Mike, now at the register, thanked them and charged them for only two of the five items.  “How are you doing?” he asked me as he finished the transaction with the couple.  “I am pretty amazed,” I responded.  “It is just wonderful to know there are good people in the world,” I said.  Then mentioned I am a preacher and would soon be sharing this story.  At this, Mike quoted a reference from the Letter of James, “The person who seeth the good and faileth to do it has not God’s love.”

What is the source of your love?  Have you been born from above?

Posted by Keith Emerson at 9:09 AM No comments: