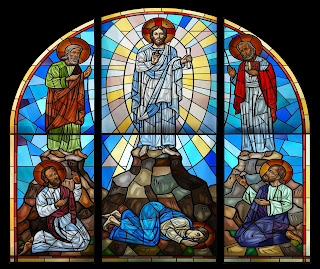 Matthew 17:1-9
The Last Sunday after the Epiphany / Year A


St. Peter writes, “We did not follow cleverly devised myths.”


One evening a couple of months ago I was trolling around Netflix for something to watch and came across a documentary called Helltown, USA.  A brief blurb stated it explores mysterious occurrences in and around Boston Township, Ohio.  Well, immediately I was hooked because Boston is a small, mostly abandoned town in what is now the Cuyahoga Valley National Park just about 10 miles north of where I grew up.  As a teenager I used to ride my bike in this area and ski on the sloops at Boston Mills, but I was never aware of strange events associated with the area.


Well, the documentary is like many in the genre.  It features interviews with experts and people involved in what happened, recreated footage using low-paid actors, and a few images of photographs of actual events.  This one chronicles the mysterious disappearance of two children back during a time when I used to ride my bike in the valley, even showing old video footage of a real Cleveland TV station’s news report.  How did I not know about this at the time?  How did my parents ever let me go into this area alone?


There was another account of teenagers trespassing in a forbidden area who are attacked and killed by a violent creature, which authorities claim later was a bear.  This happened when I was an adult living in the area.  Again, how did I not know about this?


Then there were the members are an army surveying team sent to explore the area after local residents are ordered off their property – somewhat irregularly – to make way for the National Park back in the early 70’s.  Several of these men are killed by a group of satanic ritualists.  How in the world did I not know about this?  It happened practically in my own backyard.


The documentary goes deep into the history of the region and tells the story of Native Americans and their encounter with a mysterious horned man-like creature.  Early settlers in the area encounter this same hostile being and go through all manner of incantations and offerings to placate the savage beast.  Why didn’t they teach us about this in school?


The documentary goes on to suggest the beast killed the children and the teenagers, the military personnel were slaughtered for a ritualistic offering, and the army built a hidden underground base to capture and study the creature.  The documentary crew uncovers evidence of the facility, determines it housed something, but whatever it was appears to have broken free and escaped, leaving a trail of carnage in its wake.


Well, I sat dumbfounded by all of this so I did what any sane person in the year 2020 would do… I go to the internet and Google Helltown, USA.  Well, the website popping up first develops the stories of the documentary in fantastic ways and I am left to ponder how I could have grown up so uninformed and unaware.  But eventually I click on a link describing Helltown, USA as one of a growing number of programs known as a “mockumentary.”  It is designed to look like a real documentary (especially the conspiracy types), but is so over the top it is actually a satire of all the others… the Bigfoot, UFO/Roswell, Fake Moon Landing, Kennedy assasination theories, etc.  Mockumentary!  My final question of the night was – you can guess it – How could I have been so gullible?  I swallowed the hook, the line, the sinker, the rod, the real, the tackle box, the fishing boat, the trailer, and the truck pulling it.  Geez, am I a dope or what!  I could say the truth was as obvious as the nose on my face, but this morning I don’t want to draw any more attention to my nose than necessary!


The season of Epiphany always ends with a reading of an account of the Transfiguration.  Jesus takes Peter, James, and John to the top of a mountain to pray.  The three disciples fall asleep and when they awake Jesus is standing with Moses (the giver of the Law) and Elijah (the founder of the prophetic tradition).  Jesus himself is radiating the full glory of his divinity.  God’s voice thunders from the heavens: “This is my Son, the Beloved, with him I am well pleased; listen to him!”  It is such a vivid description of a fantastically unimaginable event it almost feels like an alien encounter.  Nice try, but I am not going to fall for this one.  Fool me once, shame on you.  Fool my twice, shame on me.


What strikes me about today’s readings is what Peter writes in his letter: “We did not follow cleverly devised myths… we have been eyewitnesses of his majesty.”  It seems there are sceptics even back in the day… “You are just making up a good story.”  “You are telling a whooper of a tale.”  “I am not,” Peter responds.  “My friends and I saw it with our own eyes!”


The Transfiguration tells us Jesus is something much more than a good moral teacher.  He is more than a special rabbi or religious figure.  The Transfiguration takes this option off the table.  If true, it demonstrates Jesus is God in human flesh – divinity and humanity united in one person.  This is what the story proclaims, but can we trust it?


There are three options.  The first is this: Peter and the others are lying about what happens on the mountain.  It is, as critics suggest, merely a cleverly devised myth.  But why would they do this?  Could it be (my favorite conspiracy theory documentary phrase) they want to perpetuate Jesus’ message by making him appear to be more than human?  But, if anything, a lie like this makes the message more difficult to believe.  Even if successful, such lies shifts the focus away from the message to the miraculous, a limelight Jesus seldom seeks during his ministry.


And think about this, if the Transfiguration is just a hoax, why would those who propose it give their life to it?  Why would the apostles leave their lives, travel far and wide, and endure joyfully all kinds of hardship, struggle, persecution, ridicule, and martyrdom for a lie?  Not one of them ever confesses to anything other than Jesus as the Risen Lord.  Peter, when he is executed, states he is not worthy to die the same way his Lord, so he requests to be crucified upside down.  Does this absolutely disprove the lie possibility?  No, but it makes it highly unlikely.  This explanation raises more questions than it answers.


A second possibility is the disciples are mistaken.  They really do believe they see what they see, only it didn’t really happen.  They were, after all, asleep.  Perhaps in waking up they are confused, foggy-headed, and bleary-eyed.  In the state between sleep and wake, all manner of confusion and dreaming takes place.  Maybe they awake and the sun is rising directly behind Jesus.  It blinds them and from their vantage point he radiates a kind of glory.  But how do three adults get confused in the exact same way?  How do they have the exact same dream?  How do you account for the appearance of Moses and Elijah?  How do you account for the voice of God?  How do all three disciples have the same erroneous experience?  It seems unlikely.


The third option is to accept the eyewitness account given by Peter as being historically accurate.  It really did happen.  It is an option not without its challenges.  Can we really believe people from centuries before can reappear on earth and carry on a conversation with Jesus?  And how do the disciples know it is Moses and Elijah, two people who have been dead and gone for a millennium or more.  There were no pictures of them or paintings.  Perhaps Jesus identifies them to the disciples after the encounter concludes.  Next, you have to wonder if God has a voice that can actually be heard by human ears.  And finally – and most critically – you have to believe God can and did take on human flesh.  This is the faith Peter holds, but it takes faith to hold it.  It is not a provable fact.


The liturgical season of Epiphany is a time of revealing; revealing to the world Jesus as God’s Son.  It begins with the visit of the magi who are the first gentiles to meet the child Jesus.  It continues with Jesus’ baptism when a heavenly voice identifies him as “the Beloved.”  Some years we read of Jesus’ first miracle – turning water into wine.  Other stories – such as calming the sea – demonstrate Jesus as the Lord of creation.  This year’s readings focused only on his teachings – his moral vision for the Kingdom of God on earth.  And, as I said, we always end the season with the Transfiguration.


It begs you to ask, “Well, what do I think?  Am I convinced Jesus is God in the flesh, or am I not impressed?  Can such a fantastic claim possibly be true, or is it a cleverly devised myth?  Will I follow Jesus on his Lenten journey or will I watch from afar or will I walk away?”  The Transfiguration demands an explanation and a response.  If it is a hoax, then don’t fall for it.  If you deem it to be truth, then you must give your life to it – hook, line, sinker, rod, reel, tackle box, boat, trailer, and truck.
Posted by Keith Emerson at 10:05 AM No comments: