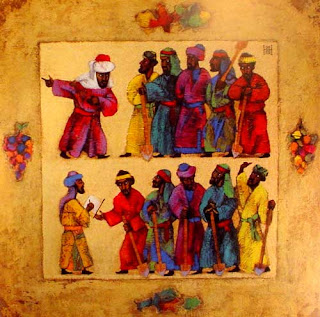 Moses said to the people, “Draw near, for the Lord has heard your complaining.”

If there is one thing connecting today’s two readings it is a deep sense of dissatisfaction.  I know complaining when I hear it because I can complain with the best of ‘em.  According to a website aimed at people in their sixties, these are seven things people my age complain about the most:

·       The cost of food, gasoline, and just about everything else.

Somehow complaining about what the neighbors across the street are doing in our church parking lot failed to make the list!

Another site suggests there are three different kinds of complainers.  First, there are chronic complainers – the folks who are never satisfied… ever.  Cognitive research has discovered perpetual negativity actually re-wires a person’s brain so that every experience is filtered with a slant toward what is wrong with it.

The second type of complainer is the venter.  They express dissatisfaction in order to garner attention and receive validation in the form of sympathy.  Vesting tends to release energy building up inside, but at a cost.  Once the energy is dispelled, so is the drive to fix whatever one finds so frustrating.  And often the energy doesn’t just go away, it gets transferred to the person listening who must now carry the venter’s emotional baggage.  As an anonymous wag put it, “I think some people enjoy complaining almost as much as they enjoy doing nothing about it.”

The final type is known as the “instrumental” complainer.  This person takes the complaint to source of dissatisfaction, names what is wrong, describes its impact, stresses the importance of change, and cooperates in appropriate ways to make it happen.  There is an old saying that holds, “The pessimist complains about the wind.  The optimist expects it to change.  The realist adjusts the sail.”

One of the striking features of Israel’s forty years in the wilderness is how passive the people are.  They want, they need, and they expect God to do everything for them… the kinds of things most of us do for ourselves.  A predicable pattern emerges: God provides and the people complain.  The manna is tasteless.  The water has a funny taste.  What’s for dinner tonight?  Don’t tell me.  Let me guess.  Quail!

Some 750 years later God’s people undertake a second kind of Exodus; this time leaving exile in Babylon to return to Jerusalem.  Although they were exiled, they where not enslaved like those who left Egypt.  These Jews become part of an advanced civilization, rise up in the ranks of society, and mingle with other exiles; exposing them to new ideas and possibilities.  They don’t need God to deliver them.  They simply go to the king and ask his permission to return home.  And when they get to Jerusalem they find its walls breached, gates burned, and the Temple destroyed.  What do they do?  Under the leadership of Ezra, they roll up their sleeves and rebuild the Temple.  Under the leadership of Nehemiah they repair the wall and construct new gates.  They don’t complain to God.  They get to work.

If you know your Virginia history you know the Jamestown settlement struggled mightily its first few years.  Thirteen years later the colony in Plymouth was equally challenged.  Both began as collectivist efforts where everyone worked for the common good of all.  Shortages and deprivation were common.  You should not be surprised to learn both enterprises reversed their fortunes and began to thrive after allocating a parcel of land to each to each individual.  The work each person put into his/her field benefitted him/her personally.  It seems in life either we work hard to make for ourselves the kind of life we want or we abdicate this duty to someone else and complain about the results.

Jesus’ parable about the day labors in the vineyard can just as easily be called the Parable about the Responsible Employer.  By paying a full day’s wage to those who do not work the full day he ensures each laborer (and each laborer’s family) will have enough to get by on for that day.  Short of a day’s wage, those workers who started later in the day would be in real trouble.

There wouldn’t be much a story here if Jesus had changed one little detail in how he tells it.  He could have had the owner pay first those who had worked the longest.  They would have walked away content with the pay they had agreed to work for.  Then Jesus could have had the owner pay those who did not work as long and no one would be the wiser… but it wouldn’t nearly be as interesting of a story. Jesus has those who worked the most watch those who worked the least get paid the same amount.  It doesn’t sit well with them and we get it.  It does not seem fair.

Barbara Brown Taylor raises an interesting question about this parable.  Why is it, she asks, as we listen to this story we so closely identify with those who worked the hardest rather than with those who worked the least?  Why are we drawn to the moral outrage of those who get shorted as opposed to the gratitude of those who get more than they deserve?  If we are honest with ourselves, we will acknowledge we have each caught our share of the breaks, been blessed beyond what we merit, generally have it better than 99% of the people who have ever lived.

Posted by Keith Emerson at 10:15 AM No comments: