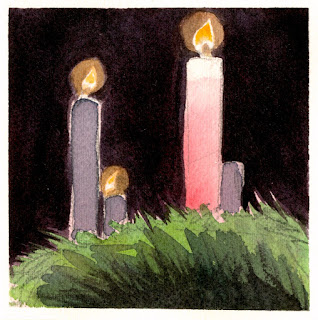 While the early history is uncertain, some say the observance of the Advent season begins with Peter and the first Apostles.  Without question, it is being practiced by the late 5th Century.  Not many years later Advent begins on the Sunday after St. Martin’s Day, November 11, thus making it six weeks long, not four.  It is a season of penitence and fasting and comes to be known as St. Martin’s Lent.  Originally the faithful are implored to fast three times a week, but the hyper-devout abstain even more often, perhaps feasting only on Sundays.  The parallels between Advent and Lent continue to grow.  At one point, Advent fasting is extended to the Day of the Epiphany (January 6), thus making this season (like Lent) forty days long.


And just as its rigors are eased on the Fourth Sunday in Lent, known as Laetare Sunday (also known as Refreshment and Mothering Sunday), so too the Third Sunday of Advent becomes a day to celebrate in the midst of an austere liturgical season.  It becomes known as Gaudete Sunday, gaudete being Latin for “Rejoice in the Lord”.  Laetare is Latin for “Rejoice, Jerusalem”.  Each is the first word from the Introit assigned for the day.  Both days become associated with the color of rose, which symbolizes joy.  So today we light the rose candle in the Advent wreath.  (The church I served in Iowa had rose-colored vestments and appointments, which it brought out every year on these two Sundays.  Wearing a large, pink chasuble, I always thought I looked like a flamingo when I celebrated on these two days.)  Over time, Advent is shortened to four weeks with less and less emphasis on penitence and fasting.  Still, the DNA of Gaudete Sunday remains intact and today beckons us to rejoice.


Or, to put it more accurately, we are told to rejoice!  St. Paul: “Rejoice always”, spoken in the imperative as if it is a commandment.  I don’t know about you, but I often have an adverse reaction to being told how I should feel.  Stop worrying!  Be happy!  Don’t cry!  Often times these things are easier to say than to do.


Growing up in Northeast Ohio I became a fan of all sports Cleveland.  And as John Rector Jr. pointed out several years ago in THE last youth sermon ever allowed by me, Cleveland sports teams have a long, deep, miserable tradition of being not very good.  On the rare occasion when one of Cleveland’s teams does get good, it finds an epic way to break the hearts of its fans.


When I was a teenager the worst Cleveland team - hands down - was the baseball team, the Cleveland Indians.  I went to several games a year in the cavernous Municipal Stadium, where a typical crowd of around 4,000 people dissipated throughout a dank, dreary, double-deck space with a seating capacity of 78,000.  Year in and year out, teams like the Yankees, Red Sox, Orioles, and Tigers came to town and demolished the Tribe.


Sitting in the stands during a typical game, with the Tribe trailing by 6 runs in the third inning, someone somewhere sitting at the console of an organ hidden deep in the bowls of the stadium plays out a familiar tune: da-da-da-da-te-da.  Perhaps forty-some fans respond half-heartedly, “Charge.”  Again, the organ calls out: da-da-da-da-te-da.  Though still feeble, this time a few more fans join in, “Charge.”  A third time: da-da-da-da-te-da, “Charge” rings out, but with barely the muster to wake a sleeping household pet from its slumber.  And then the Cleveland batter strikes out and the side is retired and we are that much closer to the inevitable defeat.


That organ sound, imploring us to yell “Charge” in the midst of hopelessness and defeat, comes back to me on this Gaudete Sunday when we are told to rejoice always.  Rejoice always?  Why?  How can we rejoice when there is so much to lament?  Life in general today feels so much like being a fan of the Cleveland Indians back in the day.  The starting pitcher gets hurt.  The promising rookie never pans out.  Our best player is going to be traded to the Yankees for a busted down veteran and a prospect who never amounts to anything.  We can’t execute a double play or lay down a bunt to advance a runner.  This is what all of life feels like: depressing, hopeless, and futile, yet today the Church tells us gaudete, rejoice always.  Why?


Try and imagine this.  What if you are sitting in that old stadium watching your miserable team playing miserably on a typical miserable Cleveland weather day, and suddenly you receive an astonishing vision and promise: this batter at the plate is going to get the hit that will start the rally that will win the game that will launch the winning streak that will catapult us to first place that will culminate with winning the World Series.  Imagine this vision is so deep and so real it consumes you, filling you with faith and hope and joy and peace.  When the organist plays, da-da-da-da-te-da, how are you going to respond?  You will yell “Charge!” with everything you have.  And batter after batter, game after game, win after win, your capacity to yell “Charge” will deepen and expand in ways you never imagined as what you long for continues to unfold.


Perhaps this image will help you to get your head around Gaudete Sunday.  We rejoice always not because of what is happening right now, but because of what we believe will happen.  The season of Advent anticipates the final return of Christ when all things will be restored and made new.  It also prepares us for God to break into our world in new ways through the Incarnation of God’s child and encourages us to see and sense how a successful stolen base is a harbinger of good things to come.


You may find it interesting to know two things about today’s Epistle reading.  First, it is taken from the oldest text in the New Testament, written before any other of Paul’s letters and well before each of the Gospels.  Thus gaudete - rejoice always - is one of the very first instructions given to the church.  And second, like the other imperatives in the reading - pray without ceasing, give thanks in all circumstances, test everything, hold fast to what is good, and abstain from evil - rejoice always is written in the plural, not the singular.  The gathering of the faithful is to be marked by rejoicing, prayer, giving thanks, and thoughtful discernment around what is good and what is to be rejected.  While our own personal ability to do any or all of these things may wane from time to time, the church exists to rejoice, pray, give thanks, and discern.


Our ability to rejoice is not dependent on external conditions around us.  God does not say, “Take a look at what is going on in your life, in your family, in your community, in your society, and in your world and rejoice.”  God says, “Here is what I promise to you and what I promise I will do.”  We rejoice in what God promises and wait for it with expectant hope.


I love the magnificent 126th Psalm, which we read just moments ago:

When the Lord restored the fortunes of Zion, *
then were we like those who dream.
Then was our mouth filled with laughter, *
and our tongue with shouts of joy.

Though I love it, I have one small criticism of it.  For the psalmist, the ability to dream of a better world comes only after God has restored the fortunes of God’s people.  The laughter and the joy come only after God has acted, but never in anticipation God will act.  Unlike the poet of the psalm, we have the advantage of Easter.  We are a people of the Resurrection who have witnessed the full power of God to act in our world.  We are confident in God’s promise for the world to come and hope for the day it will be done on earth as it is heaven.


Is that day here now?  Certainly not.  Is it near?  Well, I would say we are closer to God’s dream for all people than ever before.  Do we have a distance still to go?  Certainly, but God promises we will get there because God’s Spirit is at work in and through God’s people.  So, on this Gaudete Sunday we hear the rally cry to rejoice always: da-da-da-da-te-da.  Our response is a spirited, “Charge!”
Posted by Keith Emerson at 9:33 AM No comments: