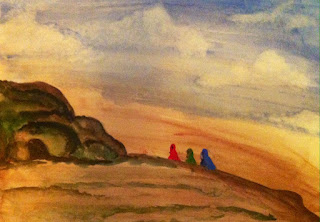 They are known as the “Myrrh-Bearers” and many Eastern Orthodox Churches will celebrate them next Sunday.  They are the women who carry burial ointments to Jesus’ tomb in the pre-dawn hours after the Passover Sabbath.  These women play a pivotal, if unheralded role throughout Jesus’ ministry; travelling with him and supporting him financially [see Luke 8:3] during his long periods away from the carpenter’s shop.  They accompany Jesus throughout the agonizing ordeal as he bears his cross to Golgotha.  They watch in silence as he suffers and dies.  They follow Joseph of Arimathea and Nicodemus to a nearby burial garden where Jesus’ body is entombed.  They watch the men tend to the corpse; wrapping it in a linen shroud saturated with 100 pounds of burial spices (five times the typical amount).  They witness a stone rolled to seal the tomb’s entrance.  No doubt they stay as long as twilight lets them dare, lest they break the Passover law of being away from home after sundown.

Surely during the Passover they are heart-broken.  It is likely no elaborate meal is served because they were preoccupied throughout the time normally reserved for its preparation.  They and their families go without on this holy day.  They wait.  They wait for the sun to go down and the Passover to end and for the first hint of dawn providing some measure of light sufficient for them to make their way back to Jesus’ tomb with more burial spices.

I don’t have the words to begin to describe the devotion these women hold for Jesus.  Tradition has it there are eight Myrrh-Bearers, although the gospels do not agree on who or how many (most likely a reflection of the four authors’ indifference to the significant role each woman plays in Jesus’ life and ministry).  Here are the people who are a part of this hallowed group:

· Mary, the mother of Jesus (who is also referred to in the Eastern Church as ‘the Theotokos,” which is Greek for ‘God-bearer.”)

· Mary of Magdala (a Galilean who either was a prostitute or possessed by demons – or both – before Jesus meets her.  She becomes one of his ‘closest’ followers – how close is a matter of speculation.  The gospel writers seem to agree she either is the first person to encounter the Risen Christ or is with a group of other women who share the experience).

· Now, this is where things get confusing because there is yet another Mary, who is identified as “the wife of Cleopas.”  This Mary may be the sister of Jesus’ mother (making her his aunt).  Or, she could be the wife of Zebedee, making her the mother of James and John, two of Jesus’ most prominent followers.  In this case, her name is also referred to in the gospels as “Salome.”  With this possibility, she may be the sister of the Virgin Mary or Cleopas may have been the brother of Jesus’ father, Joseph, making him Jesus’ uncle and again this Mary his aunt.  To make this even more confusing, this Mary is also referred to as the wife of ‘Alphaeus’, who is said to be the father of James, Jesus’ brother, who one day becomes the leader of the church in Jerusalem.  This scenario means this Mary and the Virgin Mary are one in the same.  Yet another Mary is identified as “the mother of James and Joses”, common names at the time which do not help to distinguish one Mary from another.  Somewhere in all of this are two additional women who go to the tomb.

· Joanna is the wife of Chuza, a highly placed steward in King Herod’s palace.  While this is more straight-forward than the multiple Mary possibilities, it begs the question how such a well-to-do person in society comes to be one of Jesus’ devoted followers.

· Susanna, about whom all we know is Jesus healed her of an unidentified infirmity and she possessed the financial means to be a supporter his ministry.

· Mary and Martha, the sisters from Bethany whose brother Lazarus Jesus raised from the dead.

As some configuration of all these women (possibly accompanied by others not named) makes their way to Jesus’ tomb they wonder how they will move the stone.  Matthew reports a Roman guard has been assigned to safeguard the site.  No doubt the women know nothing about this added obstacle, but it too will be a challenge they will have to overcome.  Even though Jesus taught his closest followers often and openly he would be crucified and rise from the dead after three days, there is absolutely no indication any of these women expect to find anything other than the dead body.  Their sole focus is to mask the stench of death and decay with the oils and spices they carry.

It strikes me many of us share significant traits in common with the Myrrh-Bearers as they make their way to the garden.  Like them, we are deeply devoted.  We sacrifice much (often without giving it a second thought) in response to God’s love made known to us in and through the person of Jesus Christ.  We carry a deep sense of obligation to shepherd the values and practices of the past into the present and beyond.  We have a sense the things in which we have placed our hopes are spiraling out of control and there is little or nothing we can do about it other than to give it a proper burial.  This is what Easter looks and feels like in the pre-dawn twilight of that morning so long ago: duty, mingled with despair.

As somber as the procession to the garden must be, we who have the advantage of time and history cannot help but chuckle at these bearers of myrrh because we know there cannot be anything more unnecessary at the tomb of Jesus on Easter morning than oodles and oodles of burial ointments.  Soon enough they will learn what we are blessed to know from their witness: Alleluia, Christ is risen!  Our sense of obligation, of duty, of responsibility to all that matters to God in this world is infused with Easter joy – a personal awareness Jesus is risen from the dead and a conviction the power of gloom and death has been banished.

We find ourselves in a moment much like the Myrrh-Bearers’ trodding to the tomb.  You know the litany as well as I: a global pandemic, a world super-power attempting to annihilate one of its neighbors, the shortage of basic consumer goods and the potential for runaway inflation, deep and on-going cultural differences ripping apart the fabric of our society…  Ponder it just for a moment and you might conclude the only sane thing to do is grab some myrrh and try to cover the stench.

But, just as it was on that morning so long ago, don’t be surprised if you arrive at the tomb, find the stone rolled away, the body gone, and an angel or two telling your God is not done with us yet.  So leave your myrrh at home and come here to celebrate.  We are witnesses of God’s ability to call forth joy and to make all things new.