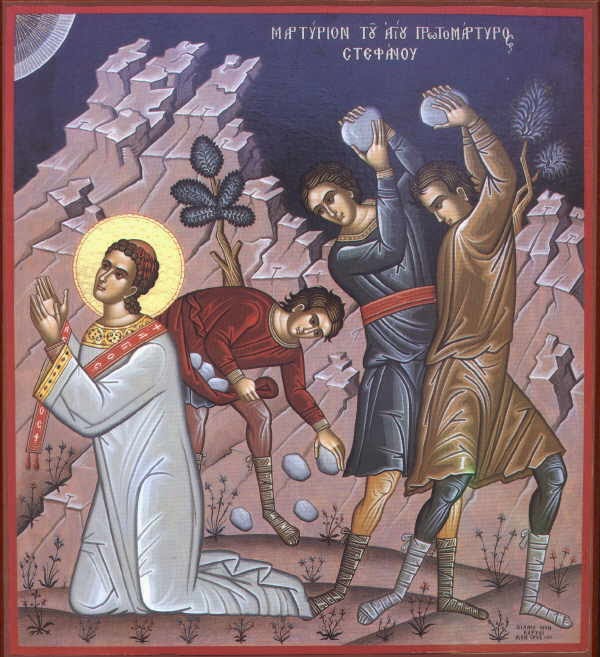 In a June 1965 commencement address at Ohio’s Oberlin College, Martin Luther King put forward this thought: “I can never be what I ought to be until you are what you ought to be.  And you can never be what you ought to be until I am what I ought to be.”  It was a statement deeply rooted in the principles of nonviolent resistance to evil and injustice and it flies in the face of thinking that holds in order for me to come out of any situation as the winner, someone has to come out as the loser.  Certainly if Dr. King could have stood before Stephen’s executioners in today’s first reading and said to them, “You can never be what you ought to be until Stephen is what he ought to be,” they would have laughed in his face.
Stephen appears from out of nowhere in the Book of Acts when he is lifted up as one of the first seven ordained deacons; ministers who had a specific role to play in the early church.  Two kinds of Christians coexisted in that Jerusalem community: those who were Hebrew Jews prior to following Christ and those who before being baptized were Hellenistic (or Greek raised and Greek speaking) Jews.  You can imagine that, while having a common faith in Christ, these two groups - given their cultural backgrounds and differences - had much to overcome in order to maintain unity.  The Hellenistic Christians complained that the community was not caring for their widows and orphans at the same level as they tended to Hebrew Christian widows and orphans.  Thus, the Apostles saw fit to ordain seven deacons, Stephen being one of them, to oversee the care of all persons in need.

Surely Stephen approached this matter with a spirit similar to Dr. King’s commencement statement; knowing that neither group benefited when one held an advantage over the other.  The good of the community demanded fair and equitable treatment for all.

In addition to this work, the Book of Acts tells us that Stephen did much teaching and also performed many signs and wonders.  He soon caught the attention of religious authorities who brought him before the formidable Sanhedrin council for investigation.  There, Stephen made an articulate defense of his faith by stating how the whole of Jewish history pointed to Jesus as being the promised Messiah.  Those leaders heard this as blasphemy and dragged him out of the city, picked up rocks, and stoned him to death, making Stephen the first person to be martyred for the Christian faith.

His dying words are truly remarkable.  If I was in his place, I might have said something like “Jesus will get you for this” or “A curse be on all of you” or maybe even in weakness, “Let me recant my testimony.”  Stephen, however, said nothing of the sort.  His last words were these: “Lord, do not hold this sin against them.”  It is an amazing response that charts a clear and merciful path for the early church to follow as it endures persecution.  Stephen’s witness continues to reverberate into our day and age as it holds up the possibility of nonviolent resistance in the face of evil and injustice.

There is a very powerful scene in the movie Gandhi where that great leader addresses a mass gathering in South Africa.  Gandhi begins his speech:
“I want to welcome you all… everyone of you (he says facing the English police and authorities).  We have no secrets.  Let us begin by being clear about General Smart’s new law.  All Indians must now be fingerprinted, like criminals: men and women.  No marriage other than a Christian Marriage in considered valid.  Under this act our wives and mothers are whores and every man here is a bastard.  And a policeman passing an Indian dwelling - I will not call them homes - may enter and demand the card of any Indian woman whose dwelling it is.  He does not have to stand at the door, he may enter.”
A man interrupts and shouts out, “I swear to Allah I will kill that man who offers that insult to my home and my wife.  And let them hang me.”  Another man stands and says, “I say those mean nothing.  Kill all the officials before they disgrace one Indian woman.  Then they may think twice about such laws.”  A third man supports this idea and proclaims, “I will be willing to die”.
Gandhi responds:
“I praise such courage.  I need such courage.  Because in this cause I too am prepared to die but my friend, there is no cause for which I am prepared to kill.  Whatever they do to us, we will attack no one, kill no one.  But we will not give our fingerprints.  Not one of us.  They will imprison us.  They will fine us.  They will seize our possessions but they cannot take our self-respect if we do not give it to them.”
A listener interrupts: “Have you ever been to prison? They beat us!  They torture us!”
Gandhi answers him by saying to all:
“I am asking you to fight… to fight against their anger, not to provoke it.  We will not strike a blow.  But we will receive them.  And through our pains we will make them see their injustice and it will hurt as all fighting hurts.  But we cannot lose… we cannot.  They may torture my body, break my bones, even kill me.  Then they will have my dead body.  Not my obedience.”
Certainly Gandhi’s thinking was inspired, in some part, by Stephen’s example.  As the old saying goes, he will love the sinner while hating the sin.  He will pronounce judgment on actions while embracing the value of the person acting.  He does not stand against other people, only opposed to what they are doing.

More and more, I am impressed by the power that you and I have through social media to join our voices with millions of others around the world in an effort to bring about justice where evil reigns.  The act of commenting, liking, and sharing posts that demand the Boko Haram free the school girls they have kidnapped brings pressure to bear on this situation.  Hopefully the same tools can help the world stand with Meriam Yehya Ibrahim, a Sudanese woman who has been sentenced to death for converting to Christianity.  Before she is executed she is sentenced to receive 200 lashes for committing adultery.  All of this comes about because an Islamic court does not recognize her marriage to a Christian man.

In his Letter from the Birmingham Jail, Dr. King wrote, “Injustice anywhere is a threat to justice everywhere.”  You and I now have powerful and productive ways to act for justice that were not available to us only a decade ago.  Stephen’s martyrdom, which was known at most to 100 people and witnessed by even less than that, today would be played out before the eyes of the world.  Your voice matters.  Your silence or indifference is also be noted and it too plays a part in every outcome.

In just a few moments we will renew our baptismal covenant by affirming our now-familiar vows to persevere in resisting evil, to proclaim by word and deed the Good News of God in Christ, to seek and serve Christ in all persons, and to strive for justice and peace among all people by respecting the dignity of every human being.  These promises have implications both for our personal relationships and for our individual standing on a world stage.

The feeling of powerlessness is perhaps the greatest temptation to inaction.  Today we have more power than we imagine.  And, as always, in addition to social networks, our individual and collective voices are heard by God.  Prayer remains the single most powerful force in a world of deadly weapons and instruments of mass destruction.

The reading from Acts ends by introducing another new character in the Christian drama, a man by the name of Saul.  He witnesses the stoning in some official capacity and is so moved by what transpires he becomes a zealous and malicious persecutor of the early church, travelling to towns and villages to carry out arrests and tortures.  In that he was present at Stephen’s death, the martyr’s dying words of forgiveness are extended to him as well as the others: “Lord, do not hold this sin against them.”

Well, in Saul’s case, God answers that prayer in spectacular fashion.  You remember the story how the Risen Christ appeared to him as he was travelling on the road to Damascus, an encounter that left Saul temporally blinded.  But it led to his conversion and to a new name – Paul, for whom our parish is named.  Prayer matters.  Forgiveness as an instrument of resistance makes a difference.

Stephen’s witness, which was an inspiration for Gandhi and King, tells us much about who we are to be as followers of Christ.  We are not to seek what is advantageous for us alone, but for what is beneficial to all.  We do not excuse bad behavior as if it were nothing, neither do we hold others forever accountable for the wrongs they have done.  We believe that evil has been judged and condemned, and thus injustice simply is intolerable in our community, in our common life, and in our personal relationships.  We stand with every person who is powerless in the face of injustice and in the name of a just God demand that righteousness reigns for all people.  And we know that the weapons of the world are not synonymous with the ways of God.

May Stephen’s example inspire and guide us as it has inspired and guided so many before.
Posted by Keith Emerson at 9:58 AM No comments: