Seeing the Holiness of God 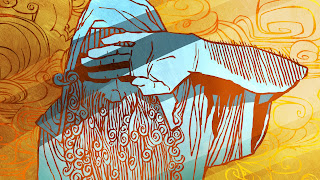 I had just graduated from high school and a classmate was throwing a party at his home to celebrate.  Now, the thing you have to know is this friend had an older sister who was a senior when we were lowly sophomores and she was drop-dead gorgeous – the kind of angelic being we put on a pedestal and revered from afar, but could never approach.  Well, at the party I was standing with Ward Ballard at the dining room table, filling our plates with food.  The older sister appeared out of nowhere with one of her equally spectacular girlfriends, looking to get some get some food from the other side of the table.  Try to imagine it as a movie scene filmed in slow motion with sweeping music behind it.  Then, the unthinkable happened.  The sister looked up from her gathering, looked across the table, looked us right in the eyes, smiled her beautiful smile, and said, “Hello.”  It was as if a goddess from above had noticed us and validated our existence in the universe.  “Hello”, my friend Ward and I said in response, but we were so dumbstruck (or awestruck) neither of us could think of a single thing more to say.  So then and there, in the presence of these two heavenly beings, Ward turned to me and said, “So Keith, a-ba-a-ba-a-ba-ba-ba!”  I have never laughed so hard in all my life.

That memory came back to me as I pondered this morning’s reading from the Book of Exodus.  Moses seeks assurance the Lord will journey with him and his people.  “My presence will go with you,” the Lord responds.  But Moses needs more.  He wants to see the Lord face-to-face.  He wants to encounter God’s full glory.  Now this is not a passing fancy or a mere curiosity.  For Moses, it is a passionate desire.  Most of us, I suspect, want to perceive how God is at work in the world.  We want to know what God would have us do.  We have certain needs and concerns we turn over to God.  But I have meet very few people in life we want to “see” God eye-to-eye, face-to-face.  Perhaps it is because we imagine God does not have a physical ‘body’ that can be seen.  Perhaps it is because we sense we are unworthy of such an audience and honor.  Or maybe perhaps it does not occur to us this should be or could be a spiritual goal.

But it is a spiritual goal for the author of the 99th Psalm, which we read just moments ago.  One of six psalms known as “Enthronement Psalms”, it proclaims the Lord is King.  It is a carefully constructed piece of poetry composed for four stanzas, each with three lines.  It mentions “the Lord” seven times and uses a pronoun to refer to the Lord seven additional times (seven being the Hebrew number for perfection and completion).  And three times, in three different ways the psalmist calls on us to proclaim the greatness of the Lord for the Lord is holy.

Holiness, something wholly other.  The poet grounds the Lord’s holiness in three things.  First, the Lord is King, reigning over all creation.  Next, unlike earthly kings who may rule out of self-interest, show favoritism, and impose tyranny, the Lord’s holy Kingship is marked by justice and righteousness.  Finally, the psalmist reflects on how our holy King elects to be in relationship with the human family in order to ensure justice and righteousness in human affairs.  We are to seek the Lord who sits enthroned.  We are to bow down before the Lord’s footstool.  We are to worship the Lord upon his holy hill (Jerusalem).

Which brings us back to Moses.  He wants to do more than perceive God, he actually wants to see God.  Once God understands this the Lord tells him it simply is not possible.  “You cannot look on my glory and live.”  So God tells Moses to stand in a cleft in a rock and says God’s hand will cover Moses as God walks by.  And once the Lord is past, God’s hand will be lifted and Moses will be allowed to see God’s back as the Lord walks away.  While still awe-inspiring, this experience will not be so overwhelming as to be deadly.

I was thinking about Michelangelo’s famous painting The Creation of Adam in the Sistine Chapel.  It is the work depicting God as an old man reaching out his hand to a reclining Adam who is reaching out his hand to God and their fingers almost touch.  In the painting Michelangelo has Adam looking squarely into the eyes of God.  It suggests as originally created we were made to be in complete communion with God, but once sin is introduced into the world, artists like Michelangelo portray Adam as walking away from God, head bowed in shame, with an arm shielding his face in attempt to prevent God from seeing him and to negate any possibility he might look at God.

I’ve told you before of an experience I had several years ago when I was a chaplain for a senior high youth conference.  I led devotional times and helped campers prepare for evening worship, which they led.  After a session where I introduced the young people to C.S. Lewis’s book The Great Divorce (in which fictional characters go to heaven but opt to leave because other things are more important to them than meeting God), I worked with a dozen campers to plan the evening service.  We decided each person would spend to time pondering what they believe heaven will be like and what about it they are most looking forward to about it.  The plan was to have them share their thoughts with the entire camp during the evening service.  They did a great job, but one thing struck me.  They talked about things like playing their favorite sports and never getting tired, but not one of the young people mentioned anything about meeting God or worshipping God or adoring God.  Heaven, for them, was a me-centered place.  Perhaps we can chalk it up to youth, still, I suspect many of us want heaven to be what we want with little consideration of what it will be like to be in the presence of a holy God who makes us go “a-ba-a-ba-a-ba-ba-ba!”

When Moses asks to see God’s glory he is in what is know as “The Tent of Meeting,” which Moses erected outside of the Hebrew camp.  It is where he would go to speak to the Lord while his people tarried in the Sinai wilderness.  In response to his request, the Lord instructs Moses to carve out two stone tablets.  You will recall Moses smashed the originals when he came down from the mountain and found his brother leading his people in the worship of a golden calf.  So Moses does his chiseling and carries the stones back up the mountain (not an enviable assignment!).  And there on the mountain the Lord passes before Moses and Moses bows down and worships.  The Lord promises to be “compassionate and gracious, slow to anger, abounding in love and faithfulness.”   It becomes God’s covenant promise to all people through Moses.

Does seeking God’s glory make a difference?  You bet it does.  It leads to the Lord defining God’s relationship with the human family, a promise which cannot be broken.  And it changes Moses.  His face becomes radiant and as a result his brother and his people become fearful in his presence.  They now have the “a-ba-a-ba-a-ba-ba-bas” when they are around him.  But this is not Moses’ desired outcome, so he begins to veil his face in their presence.  Maybe in another sermon I will explore what it means to withhold some of your personal experience of the Holy One, but (as they say in business meetings with newsprint) “Let put that idea in the ‘parking lot.’”

Here is what I take away from today’s readings:

· God is awesome and worthy of your interest and pursuit.

· This pursuit will change you in ways you cannot imagine.

· Your pursuit of God’s glory in your life will have a profound impact on those around you: your spouse and family, your friends, your church, your community, your nation, your world, and even all of creation.

Posted by Keith Emerson at 12:24 PM No comments: