The Spirituality of a New Locker Room 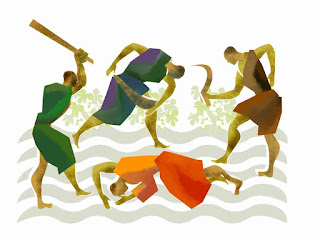 Some years ago a small town high school with a long tradition of winning football started to slump and struggled through several seasons with losing records.  To turn things around the school hired a new football coach: Dick Butkus, the hall-of-fame linebacker from the Chicago Bears who is arguably one of the toughest players ever to put on shoulder pads.  Coach Butkus had his work cut out for him.  At every practice he told the players the game is 90% mental and he told them they had to stop thinking like losers.  They had to think like winners and practice like winners and act like winners if, in fact, they wanted to be winners.

To help facilitate this change, the school boosters raised a ton of money to build the team a brand new, state of the art, locker room facility.  During summer two-a-day practices, Coach Butkus took the team in to the new facility to show it to them.  The boys were in awe, to say the least.  “Take a good look around,” Butkus said to them, “because I won’t let you back in here again until you earn it.”  The boys’ jaws dropped, their eyes about fell out of their sockets, and a stunned silence fell over the team.

Earn it?  Was he kidding?  No, Butkus was serious.  This is how he explained his thinking: “When something like this is just given to you, it doesn’t mean as much as when you have to work for it.”  And so for days the boys did nothing but talk about stepping it up… at practice, in the classroom, at home, and on the field.  They were determined to get that locker room.  And they succeeded.  After the last practice before the first game of the season, Coach Butkus allowed them move in to their new facility.  For some of the young men on that team it was the first time in life they earned anything.  Before then everything had been handed to them.  All that they had had come to them through little or no effort on their part.

That football team tells us a lot about what has changed in our society.  As recently as a generation or two ago the American dream consisted of finding a way to do something better, cheaper, or more efficiently.  The typical American worker understood honest labor and prudent saving could improve one’s lot in life.  The common thread connecting everyone’s work ethic was a belief personal productivity would get one ahead in life.  And getting ahead looked like educating yourself and your children, contributing something useful to society, and having a good name in the local community.  Today the American dream looks more like, well, winning the lottery, which is little more than a hope someone will hand you a better life.  An entitlement mentality permeates much of our common life.  We all expect more and more to be done for us and we expect someone else to bear the cost.

This shift in mindset plays itself out in every facet of our society, including congregational life.  Two generations ago people attended church to discern what God required of them.  Today, churches strive to offer programs catering to the wants and desires of its members and the wider community.  The public call to be transformed into the image of Christ is hushed, if heard at all… drummed out by the need to promote what the church can do for you rather than focusing on who God calls you to be and what God has created you to do.

Jesus’ parable in today’s Gospel reading suggests this is really nothing new.  It is the human condition to want to get something for nothing, to underachieve and yet still overreach, to covet and to take rather than to give and to work.

The parable builds on absolute bedrock theological truth.  This world is God’s world.  God imagined it.  God called it into existence.  And God sustains it.  But God entrusts a part of the sustaining work to us.  Like the laborers in the vineyard each of us is given work to do; and think of work in the broadest terms… doing a job, raising a family, and contributing to the common good.  For this we have been created and with this we are charged.  This is God’s plan for the world and doing what we are called to do gives us a sense of purpose and place and dignity.  In a real sense this work, as the old saying holds, is its own reward.

Or it can be.  But Jesus’ parable highlights the darker side of our human condition.  Rather than finding our meaning and joy in doing the work we have been given to do, we decide that we would rather hold the place of God.  We want to call the shots and possess all we covet.  And we want to get it in the easiest and most selfish way possible… bypassing the call to serve one another through our prayers and labor in favor of having more and bigger and better and new.  And why do we want all of this stuff?  Because it is a substitute for what God’s call gives to us: a sense of purpose and place and dignity.  We all need reinforcement and affirmation of our worth.  The question is where will we turn to find it?  Will we accept the call God extends to us or will we turn to the ways of the world and the offerings of our consumer-driven culture?

St. Paul, in his letter to the Church in Philippi, writes this: “This one thing I do: forgetting what lies behind and straining forward to what lies ahead, I press on toward the goal for the prize of the heavenly call of God in Christ Jesus.”  He says we have a choice to make.  Either we can live our lives to obtain earthly things or we can strive to live like citizens of heaven… people who are in the world, but not of the world.  One goal leads to the highest imaginable purpose in life.  It brings order and coherence to all that we do because we align how we live and move and have our being with the way that God has created life to be.  The other way perverts and distorts life as God intends it by making earthly acquisitions and achievements to be the ultimate goal, and by obtaining them through any means necessary.

Jesus’ parable tells us how we live and how we work and how we contribute to the common good are spiritual issues.  These activities can be rooted in faith and practiced as a part of our devotion, or they can be rooted in selfishness and be carried out completely indifferent to God’s call.

Does the decision we make make a difference?  Go back to that high school football team.  Had the coach simply let the boys have the new locker room it would have been just one more thing given to them.  Perhaps early on they would have appreciated its new shine, but eventually the shine would have worn off.  Then they would have sat back passively waiting for somebody else to give them something new.  But because they earned the facility through their hard work and practice the locker room had more value to them.  It is a value springing from their own efforts.  And for the rest of their lives they will value that facility because their goal was not to have a new locker room, but to be worthy of it.

Posted by Keith Emerson at 10:57 AM No comments: