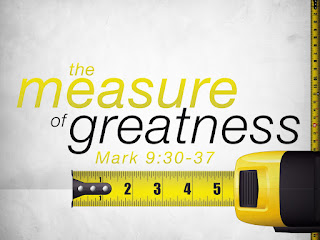 If you listen to Sports Talk Radio, as I do, you know often there is a debate about “the G.O.A.T.”  Now, it used to be a goat in sports referred to a person who lets down the team; like the batter who strikes out with the bases loaded or the kicker who misses a game winner.  Well, this usage largely has disappeared and a new meaning has emerged.  G.O.A.T. now is an acronym signifying “Greatest of All Time” - the best player ever at his or her sport or position.  Tom Brady is the G.O.A.T. of NFL quarterbacks.  Novak Djokovic had an opportunity to become the G.O.A.T. of men’s tennis, but failed to win the US Open last week.  And nothing stirs up impassioned debate like arguing who is the G.O.A.T. of basketball – Michael Jordon or LeBron James.

Sports lends itself well to this kind of discussion because it has so many measurables: wins, batting average, championships, points, and so on.  Most occupations lack these concrete elements.  How would you determine which teacher is the G.O.A.T.?  By comparing students’ SOL results?  You could determine the G.O.A.T. of realtors merely by calculating volume of sales, but isn’t there more to the profession than this?  And how in the world could you ever figure out the G.O.A.T. of preachers?  Most parishioners in the pews or fewest people who fall asleep or something else?

I suspect most of us are not driven to be the G.O.A.T. at what we do.  We want to be the best we can possibly be, but recognize ‘greatness’ is awfully difficult to obtain.  When we say (for example) “Jan Gates is so great at flower arranging” we are highlighting a particular skill or ability.  We intend it to be a compliment, but is not an indication she is the G.O.A.T of all flower arrangers who possesses an exalted position of over everyone else.  St. Paul’s is blessed to have several people who excel in this area.  We appreciate their contributions.  We don’t attempt to rank them.

Well, hopefully all of these musings help you to grasp the absurdity of what the disciples discussed amongst themselves in today’s gospel reading: Which of them is the G.O.A.T.?  Umm, the fact they are asking the question suggests the answer is this: None of them!  Can you imagine walking into a Vestry meeting and finding our elected parish leadership arguing about who of them is the greatest?  Could anything be less Southern!  I can’t even begin to imagine the criteria the disciples draw on to justify their self-importance.  Number of converts?  Most “you have answered correctly” responses from Jesus?  Longest beard?  It is just unfathomable.

Jesus, as he so often does, defines kingdom living and kingdom behavior by reversing norms and expectations.  “Whoever wants to be first must be last and a servant to all.”  And then he enacts a parable by taking a child into his arms and saying “Whoever welcomes a little child welcomes me.”  In other words, your greatness manifests itself in how you treat the least, the last, the lost, and the lonely.  You manifest greatness not by mastering a particular skill or craft, but by being mindful of others… especially those people who don’t seem to matter in the eyes of the world.

Since we’re talking sports, when LeBron James came back to the Cleveland Cavaliers several years ago he had one goal: to bring a championship to the people of Northeast Ohio.  In order to accomplish this he knew he had to be more than the G.O.A.T. on the basketball court.  He had to show every member of the team and the organization what it takes to be a winner.  One night in the locker room after a game, James noticed how all of his multi-million dollar teammates left their sweaty uniforms and wet towels in piles on the floor for the lowly laundry boy to pick up.  LeBron called the players together and told them they would never be champions until they recognized and valued the contributions of each and every person in the organization.  “Champions,” he said, “put their dirty clothes in the laundry basket as a sign of respect for the person who does the laundry.”  “And,” he told them, “they know the name of the person who does the laundry and each and every day they thank him (by name) for what he contributes to the overall effort.”

Jesus reminds us greatness is about how you give yourself to others.  You can measure which pop star sold the most records in a single year, but you can’t measure how he, she, or anyone of us values another person.  Still, we all recognize when we see it the kind of greatness which Jesus admires.

I love this morning’s first reading from the Wisdom of Solomon.  It contains such wonderful, evocative language as it describes what happens if you attempt to hold yourself to a high standard… there will be plenty who wait anxiously to cheer your fall.  Solomon is looking at the same thing Jesus is –greatness – only from a different vantage point.  From where he stands, greatness involves attempting to know “the secret purposes of God.”  It is about “hoping for the wages of holiness”, which I suspect won’t help your credit rating but will make you a more loving, caring, and thoughtful person.  And it is about discerning the “prize” that awaits for “blameless souls”, which may be eternal life, but even more I think in means you can look at yourself in the mirror with as little a sense of shame or regret as possible.

So, we live in an era obsessed with G.O.A.T.s.  This morning’s reading invites us to ponder what it means to be Great as God Estimates (G.A.G.E.).  While I don’t think G.A.G.E. is going to replace G.O.A.T. in our cultural lexicon anytime soon, nor will it even approach the stratosphere of W.W.J.D. (What would Jesus do?), it is worth considering.  What makes a person great: Nailing the championship-winning three point shot with seconds left on the clock or saying to the laundry boy after the game “Richie, thanks for everything you do to help us be a better team?”  What makes a person Great as God’s Estimates?