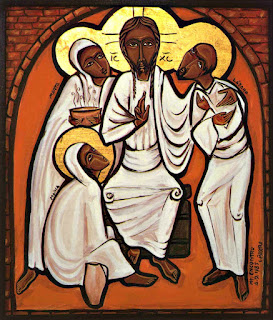 We Episcopalians hold the Scriptures “contain all things necessary for our salvation.”  In other words, they present us with all the information and revelation we need to carry on in the orthodox faith and life.  However, this statement of belief does not mean the Scriptures contain everything we would like to know.  We would love to know more about Jesus’ formative years.  Why is Joseph not present during Jesus’ public ministry?  What becomes of all the people Jesus touched during his ministry – Zacchaeus (the short tax-collector in a tree), Bartimaeus (a blind beggar), Legion (the demonic chained up in a cemetery), and the Samaritan woman at the well (an outcast in her own community) to name a few?  While we may wonder about these and other things, the gospel writers deemed them to be ancillary to their main work of presenting Jesus as the Messiah.

Among the people we meet in the gospels and would like to know better are three siblings, Mary, Martha, and Lazarus of Bethany (a town about two miles southeast from Jerusalem on the opposite side of the Mount of Olives).  Here is what we know about them:

· They are very close and supportive friends of Jesus.

· They host him and his followers in their home at least twice, providing meals and hospitality for a large party at each occasion.

· At the first recorded gathering Mary sits at Jesus’ feet listening to his teaching while Martha (the older sister) busies herself with the details of preparing a meal and serving.  Martha finds this irksome and complains.

· At a later time, Lazarus becomes ill and the sisters send word to Jesus.  Jesus delays and Lazarus dies.  He arrives four days later.  Each sister believes he could have saved their brother, but each also professes a belief in the eventual Resurrection of the dead.  Jesus goes to the tomb of his friend, weeps, and calls him back to life.

· This event becomes known throughout the region and it is so threatening to Temple officials they begin to seek a course of action to have Jesus arrested and executed.

· Lazarus himself, telling his story often and everywhere, becomes a threat and the same officials seek to have him put to death as well.

· A week before the Passover Jesus is at his friends’ home and Mary anoints his feet with a costly perfume while Martha serves a meal (this time seeming at peace with her role).  Judas becomes upset at the lavish nature of Mary’s gesture and Jesus’ response becomes the impetus driving him to betrayal.

From what we know, it is obvious Mary, Martha, and Lazarus are a significant part of Jesus’ life and ministry.  Here is what we don’t know:

· The three siblings appear not to be married, live together, and have some means.  What is their story?

· How initially do they meet Jesus and become so devoted to him?

· Do they travel with Jesus on any of his missionary journeys?

· Does Jesus stay with them during his many visits to Jerusalem for religious festivals, including the final days of his life?

· Is either sister among the women present at Golgotha for the crucifixion and does either go to the tomb early on Easter morning to anoint the body with burial perfumes?

· What becomes of the three after the Resurrection?  We hear nothing more about them in Scripture, which seems odd.

Here is a possible scenario answering at least some of these questions:

We learn from other passages in the gospels (Matthew 26:6-13, Mark 14:3-9) the home in Bethany Jesus visits is owned by Simon (a common name in the New Testament), who is given the surname “the Leper”.

There are a couple of things confusing about this.  First, there is another incident in Bethany where Jesus is having a meal in the house of Simon who is a Pharisee (Luke 7:36-50) when a “woman who is a sinner” anoints Jesus’ feet with costly perfume and her tears.  Some are tempted to combine these events, making them different ways of telling the same story.  But there are significant differences between the two and it is best to understand them has separate events.

If Simon the Leper is the father of the three siblings, and if Jesus heals him, this goes a long way in explaining their devotion to him.  However, there is no mention in the gospels of Jesus healing a leper by the name of Simon.  In addition, the designation “the Leper” is in the present tense, as if Simon still has the disease.  If this is the case, we are left to wonder why he is still allowed to live in the same home as his children, rather than being consigned to a leper colony.

It is possible the designation “Leper” is a mistranslation from way back because very closely related to this Greek word is one which means “the Potter.”  If Simon is in the pottery business this explains both the family’s affluence as well as Mary’s access to an expensive alabaster jar of ointment.

Most likely we will never know how Jesus initially meets the three siblings or how we can account for their devotion to him.  Perhaps it is as simple as they hear him teaching in the Temple one day, are drawn to his message, and invite him to their home.  And most likely they are much more involved in the events of Jesus’ life and ministry than the gospels record.

Here are some things Jesus’ friendship with Mary, Martha, and Lazarus tells us about him:

· First, Jesus values compassion over potential conflict and personal harm.  He does for his friends even knowing his actions will comprise his own safety.

· We learn he is a person of deep emotion who is grieved to the core by the death of a friend.

· We hear his friends express their disappointment in him, but he does not lash out in response.

· We witness how he willingly receives gestures of comfort and respite – a meal, a tender caress.

· He seems very protective of his friends – especially Mary.  Both when Martha criticizes her and when Judas criticizes her, Jesus comes to her defense.

In 1855, when Joseph Scriven wrote “What a friend we have in Jesus”, he honed in on “all my sins and griefs to bear.”  From his relationship with this one family we discover Jesus is capable of a kind of friendship which goes well beyond utilitarian – if you do this for me, I will do something for you.  Jesus offers friendship marked by intimacy, caring, openness, and selflessness.  Can you use a friend like this?

Posted by Keith Emerson at 10:52 AM No comments: