From a Crappy Deal to Real Possibilities 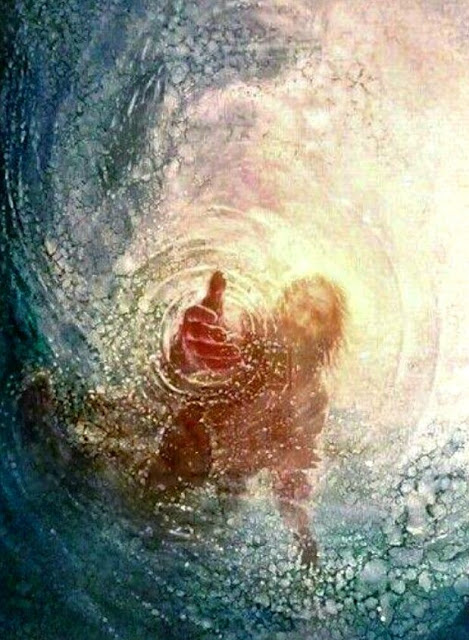 All four gospels relate a version of the story we just heard.  Luke has Jesus in the boat with the disciples.  He is asleep in the midst of the storm, but when awakened, calms the sea.  The accounts in Mark and John closely follow the details in Matthew’s.  The 5,000 have just been fed (last week’s reading) and Jesus ‘makes’ the disciples get into a boat while he retreats for prayer.  The boat struggles for hours because the wind is against it.  Jesus, noticing this, walks out on the water, intending to pass by them.  The disciples see Jesus on the water and are terrified.  He tells them not to be afraid, steps into the boat, and the storm abates.

Matthew adds one detail Mark and John do not.  Only Matthew tells us about Peter’s part in this story.  So let’s lay aside conversation about how Jesus is able to walk on water and command the weather – even though the modern mind begs for discussion about this – and focus our attention on what makes this report of the event unique… Peter.

Several, but not all, of Jesus’ disciples are fishermen by trade.  Peter is one of them.  Unlike, say Matthew (a tax-collector and no doubt landlubber), he is at home on the water.  Unlike me, who gets seasick in minor wave action, Peter is unfazed by sporty conditions.  And he is accustomed to being on the water at night, for this is when he does most of his fishing.  He is familiar with this body of water and its fast and frequent changes in conditions.  Peter is in his element.

And, as the text tells us, on this night the conditions are not good.  Waves batter the boat and the wind is against it.  In spite of their efforts and expertise, the disciples are far from land and have made no progress.  From Luke’s account we know some, if not all, on board believe the boat is in danger of sinking.  Peter and the other fishermen must surely be drawing on the storehouse of their collective vast experience, but nothing is working.  The situation is desperate and disheartening.  Peter must be at a loss.

And we know just how he feels.

I don’t have to tell you what kind of a year 2020 has been.  The wind is against us and the waves batter us from all directions.  And, no matter what we do, no matter how hard we try, no matter what sacrifices we make, it feels like we are making no headway in our struggle against the virus or in addressing calls for social change.  It is so frustrating and at times feels hopeless.

And then comes this past week with its “gift” of a hurricane.  Oh my Lord, how much more can we take?  How bad is it?  One person asked me how many more plagues we can expect!  For those of you not fortunate enough to sleep through the tornado ripping through our downtown, as I did, the fury in that moment created fear as never before.  For those who were spared from damage and destruction, our concern shifted immediately to friends and neighbors.  Are they OK?  Daylight brought with it a new realization of damaged homes and devastated neighborhoods and the hard work of cleaning up, which unfolded in a community without power sweltering in Suffolk’s August weather.  Yes, we know how Peter was feeling in that boat.  We, like him, have had enough!

Upon seeing what appears to be a person walking on the water, the disciples’ initial response is fear, which is understandable.  Then, once Jesus identifies himself, Peter speaks up, “Lord, if it is you, command me to come out on the water with you.”  We might want to ask what motivates him to do this.  I think there are three possibilities.

The first is a sense of daring.  In previous sermons on this passage I have praised Peter for his willingness to take a risk while the other disciples played it safe by cowering in the boat.  You know, sometimes you just have to get your feet wet.  Better to try and fail then never to try at all.  Peter should be admired for his daring nature, but today, at least, I don’t see this as his motivation.

Another possibility is devotion.  Peter wants to be where Jesus is and if this means going out on the water so be it.  Devotion is a strong drive for those of us who love the Lord.  Our heart’s desire is to be with Jesus and to be like Jesus.  In the text Peter says, “Command me to come to you on the water”, which might point to devotion as the motivation, but when Peter qualifies it with “If it is you…” it feels more like a test than a longing.

Here is a third possibility.  Peter might be motivated by despair.  He has had all he can take of struggling in the boat and will do anything to get out of it.  And do we ever know how this feels!  If Jesus was standing in the middle of the Nansemond River and we thought we could get away from all our troubles by walking out to him, at this point, who among us wouldn’t give it a try?

Peter takes a few steps and all seems to be going well until he notices the strong wind, becomes frightened, begins to sink, and cries out to Jesus.  Jesus takes hold of him and says, “You of little faith, why did you doubt?”  Doubt what?  In God?  In Jesus?  In himself?  The text doesn’t make it clear.  But let me suggest Peter’s faith first begins to waver the moment he can no longer tolerate the futility of being in the boat.  He gives up and gives in to hopelessness.  And we get it!  Walking away from his troubles provides a temporary relief – a very temporary relief – until he discovers getting out of the boat doesn’t mean getting out of the wind.

This week I received the summer edition of the Virginia Theological Seminary Journal.  In his remarks, the dean, Ian Markham, described for readers the life of the seminary as it began with the 2019 fall term through how it ended in the spring of 2020.  While the details vary, its story parallels that of every person and institution… plans and activities, normal daily life and routine, giving way overnight to a new and unrelenting reality.  Four people at the seminary tested positive for Covid-19 and at one point 58 people were in quarantine.  A handful of seminarians went to St. John’s Church at Lafayette Square to provide water, first-aid, and spiritual support to peaceful protesters, but after being gassed off the church grounds by federal agents, had to flee for their safety.   The seminary has not experienced a year this trying since it was turned into a field hospital during the Civil War.  And yet, it continues to fulfill its mission.

Paul writes in II Corinthians 4: “We are afflicted in every way, but not crushed, perplexed, but not driven to despair, persecuted, but not forsaken; struck down, but not destroyed; always carrying in the body the death of Jesus, so that the life of Jesus may also be made visible in our bodies.”  There is no promise in Scripture that we are not going to be afflicted, or perplexed, or persecuted, or struck down.  But the promise of Scripture is that, through the grace of God, we will not be crushed, not driven to despair, not forsaken, and not destroyed.

We cling to this hope in this challenging time.

I had my little moment of this truth on Wednesday as I sat in the church office.  It had no phone or Internet connection, but it did have power.  So, I was isolated from the outside world, but comfortable. With nothing else to do, I picked up a booklet called Letting Go, which I had loaned out and was recently returned to me.  Letting Go compiles from sermons and newspaper columns the words of Ed Campbell, a priest I served as a seminarian.  In 1996 he was diagnosed with cancer and given six months to live.  True to Ed, he was open with the congregation he served about the physical and spiritual struggles he engaged up until his death in the spring of 1997.

As he learned to let go, embrace powerlessness, sense God’s presence in moments most would think God is absent, Ed Campbell opened eyes in practical ways as to how God’s grace works in this world.  And, as he approached his end, Ed preached and preached and preached about God’s goodness at a very basic level.

Allow me to share a few of his words with you:

The message I’m looking forward to every day, from this moment on, is that there is joy everywhere, if you just look for it.  Or, to say it another way, God is always around.  He is always in the business of redeeming – that is, of turning what looks like a crappy deal into a real possibility.

Ed is talking about a moment when he is tired and wants to resist his wife’s beckoning to get out of his easy chair and join her for a drive.   He musters the strength and courage to get up and the reward for his efforts is an excursion to a local ice cream store.  Cones in hand, they sit together and watch a beautiful sunset.  This is the real possibility God brings forth out of a crappy deal.

So, here we are on August 9th in a year many of us are ready to view in the rearview mirror.  It has been a crappy deal, without question.  But how do you see God transforming it into real possibilities?  Peter thought the solution was to abandon all he knew, but realizes out there on waves the wind still raged.  He found no relief by running (or wading) away.  He needed God to transform the moment into a real possibility.

When I walked into Riverview on Tuesday the first person I encountered was Steve Galotta.  He was able to give me a complete and detailed account of how the tornado impacted his neighborhood, with a specific emphasis on members of St. Paul’s.  It was the first of many instances I saw of neighbor looking out for neighbor.  We are in this boat together.  And there will come a day when the winds hush and the waves calm.  Until then, we know God is near and notices and, through the empowerment of the Spirit, nothing will befall us we cannot manage.  And who knows, there may just be an ice cream cone in our future!

Posted by Keith Emerson at 10:04 AM No comments: