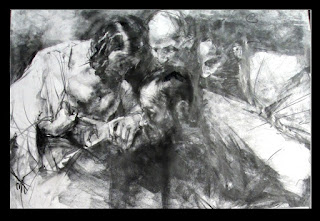 Today is often referred to as “Doubting Thomas Sunday” because the Lectionary always assigns the reading we just heard to be read on the Sunday after Easter.  It serves to remind us the claims of Christianity are not at all easy to affirm.  Faith, one person noted, is belief without proof – not an easy thing for the modern mind to do… or for Thomas.

Many Christians act as if a prohibition against doubting is one of the 10 Commandments.  Nothing will make a person feel worse about his or her faith faster than the presence of doubts.  And doubts seem to come in one of two forms: Either a person doubts God will come through on a promise or assurance (like protection or guidance or healing) or a person cannot subscribe to one or more central tenets of the Christian faith – our core beliefs.  Let me say a brief word about each.

More than one person, while in the midst of tremendous personal suffering, has confessed to me about struggling with what they consider to be the “sin” of doubt: “I know I should trust in God, but it is so hard right now.”  My response:

It is very easy to confuse doubt with being disheartened.  It is very difficult to look up when everything around you is looking so down.  Believe me, God gets it.  When so much else is weighing you down, there is no need to heap more guilt on yourself.  Tell God you are discouraged and ask for help.  It is not always obvious how God will respond or who God will send to you to help see you through, but it will happen.  All you need to do is be on the lookout.

The second kind of doubt is more intellectual than emotional and has to do with the teachings of the faith.  Here, the opposite of doubt is not faith, but certainty… and if you have ever known anyone who is certain about everything they believe, you know this is not necessarily a desirable trait.  Paul Tillich, the great theologian of the last century, held doubt is an element of faith – the questioning which is absolutely necessary to our response to God if our faith is going to be anything more than an idol of our own creation.

Those of you who join me on-line for services of Morning Prayer know we recite the Apostles’ Creed pretty much every single day.  Developed in the early 5th century in Gaul, it consists of twelve statements of the faith, grouped together in a Trinitarian structure: “I believe in God”… “I believe in Jesus Christ”… “I believe in the Holy Spirit.”  A tradition emerged crediting each of the twelve Apostles with adding one line to this creed.  The other day I got to thinking it would be an interesting exercise for some adult group to take each of the statements separately and arrange them in order of “believability” – the easiest to affirm to the most difficult.

He suffered under Pontius Pilate,

was crucified, died, and was buried.

I believe in the forgiveness of sins.

I believe in the communion of saints.

I believe in the holy catholic Church.

Most problematic for me:

I believe in the resurrection of the body

He will come again to judge the living and the dead

Another day and another time, I can say more about this, but for now let me simply convey I am happy to be a part of the faith while embracing certain questions about what it teaches.

In this sense I see myself in Thomas.  He manages to spend an entire week with a roomful of people who are rock-solid in their belief the Risen Lord has appeared to them while he himself cannot possibly fathom how such a thing can be possible.  Thomas represents doubt dwelling in the midst of faith.

A part of me wishes this story could be read on Easter Sunday.  So many people attend that service who may not be here again until Christmas.  I am sure more than one of them has significant questions/doubts about this whole Christianity thing.  Drawing on Thomas’ experience, to them I would say this is exactly where you need to bring your doubts and hang out.  Don’t stay away until you have it all figured out.  Don’t stay away until it all makes sense.  Don’t stay away until there is a scientific explanation for the Virgin birth and the bodily Ascension into heaven.

Thomas reminds us not only are doubters welcome in the church, in many ways we are necessary.  We don’t deny the faith.  Rather, we push it to new places and new insights and new understandings.  There is no evidence any of Thomas’ colleagues thought a physical inspection of Christ’s wounds mattered.  But to Tomas it did.  And countless many, given the evidence he (in his doubts) gathered, have come to believe.  Your doubts are not doors to padlock and keep out of sight, but avenues to explore, knowing faith always finds a place of serenity.  Why else would Jesus repeatedly greet his friends by saying, “Peace [not certainty] be with you?”

Posted by Keith Emerson at 2:35 PM No comments: