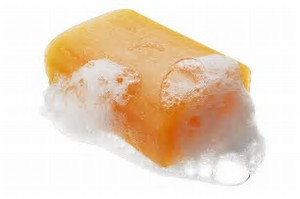 A priest and a man who owns a soap making business are walking down a city street.  The man says, “You know father, I don’t think the Christian message of repentance, forgiveness, and new life is doing much good.”  The priest inquires why his companion believes this.  His response: “Well, there are so many problems in the world and so many evil, nasty people.”  They continue to walk in silence.  After few blocks they happen upon a group of children covered in mud as they play in a dirty field.  The priest says, “I see your soap hasn’t done much good either.  Just think about all the dirty people out there.”  The man responds, “Oh, my soap only does its job when a person applies it.”  The priest says, “Well, the same holds true for the message of the Gospel.”


Deuteronomy 5:9 cannot be clearer: “You shall not bow down to [false idols] or worship them; for I the Lord your God am a jealous God, punishing children for the iniquity of parents, to the third and fourth generation of those who reject me.”  This teaching becomes deeply ingrained in the theology and psyche of the people of Israel.  But it runs deeper than believing the actions of the parents positively or negatively influence who their children become.  It believes God holds morally responsible children and grandchildren for the failures of the first generation; that they shoulder the punishment resulting from the sins of their ancestors.


Well, this may not seem fair to you and, as we heard in today’s first reading, it certainly does not seem fair to the Israelites living in exile in Babylon.  They complain, “the parents have eaten sour grapes, and the children’s teeth are set on edge.”  A more modern version might be “the parents ate all the candy, but the children got the cavities.”  If you are the second or third generation living in Babylon, it feels as if your fate has been sealed by something you never did.  You have been born into a massive debt you cannot possibly repay.  It does not seem fair.


God agrees.  God says, “From now on, only the person who sins shall be punished.  If a righteous person turns to iniquity, this person will suffer.  If a wicked person repents and does what is right, this person will flourish.”  I prefer the language of “suffer” over “death” and “flourish” as opposed to “be saved”, because these words preserve the connection between the goodness of what God commands and the effect they have on us as we adhere to them or turn away.


Jesus draws deeply from the Ezekiel reading to craft the parable we heard this morning.  When asked by their father to work in the family vineyard, one son says no, but later changes his mind and works.  The other son says he will work, but never does.  Jesus tells the story to illustrate how “sinners” have believed in him, while religious leaders have rejected him.


In plan words, it is not what you say that matters, it is what you do that counts.  There is an old saying sitting in a church every Sunday makes you no more a Christian than sitting in a garage makes you a car.  Doing the faith matters more than thinking the faith.  After Hurricane Harvey, Joel Osteen, whose sermons are seen by seven million people a week, was roundly criticized for not opening immediately his church building – a former sports arena – to people evacuated or flooded out of their home.  It just didn’t seem very Christian or caring.  It is not enough to talk the faith.  You have to do it.  Christianity has to be applied.


The truth is, none of us is perfect, starting with me.  Standing on righteous soil, I make decisions all the time that lead to my suffering and, sadly, to the suffering of others.  And I don’t need to stand in this pulpit and work hard to convince you that you are the same.  We all identify with the phrase “You that have tried to follow, and you (like me) who have fallen short.”


The passage from Deuteronomy is grounded in God’s justice – in the belief some things are right, other things are wrong, and if you do what is wrong you will be punished.  Today’s readings from Ezekiel and the gospel are grounded in God’s mercy – in the belief God’s love for every human being is far more expansive than God’s justice.  Wrong is still wrong, but God’s strongest desire is for each person to repent, to change, and to flourish; to live a life that is blessed and is a blessing to others.  Unlike what the exiles in Babylon believe, we are not the victims of the sins of those who come before us.  We are free to turn and live.


It is a message Robert Robinson heard as he walked the streets on London on a beautiful Sunday morning some time in the 18th century.  All around him he saw people hurrying to church, but even in the midst of this throng Robinson was all alone.   There was a time when church and practicing the faith was an integral and essential part of his life.  But for reasons lost to history, those days were gone and Robinson spent years and years rejecting the God he once loved.  Once his faith was fiery and passionate, but now it was dark and cold.


Robinson grew tired as he walked and hailed a passing carriage/cab.  When he saw in it a young woman dressed for church he waved on the driver, but the woman insisted they share the cab.  He accepted and introduced himself as Robert Robinson. Stunned, the young woman said, “This is such a coincidence because I am reading this book of inspirational writings and just came across these words by a Robert Robinson:


Come, Thou Fount of every blessing,
Tune my heart to sing Thy grace,
Streams of mercy, never ceasing,
Call for songs of loudest praise.


Are you the author of these magnificent words,” she asked?  “I am,” Robinson confessed, “but that was a long time ago.”  He continued to read the very words he had penned at a different era in his life:


Prone to wander, Lord, I feel it—
Prone to leave the God I love;


Robinson was overcome with emotion and confessed, “I wrote these words—and I’ve lived these words.  ‘Prone to wander…prone to leave the God I love.’”  The young woman looked tenderly into Robert’s eyes and said softly, “Yes, and you also wrote,


Here’s my heart, O take and seal it,
Seal it for Thy courts above.


You can offer your heart again to God.  It is never too late.”  At this very moment, Robert Robinson turned his heart back to God and never turned away again.


We all carry burdens, some heavier or more poisonous than others.  Some came into our lives at childhood through no fault of our own, yet we still carry them today.  Others come from choices we make, sometimes daily.  We didn’t start out to be at this dark and destructive place, but here we are.  The good new in today’s readings is challenging news as well.  The son who refuses to do the will of his father can change his mind, roll up his sleeves, and get to work.  His fate is not sealed.  The punishment he merits is not irrevocable.  God, in God’s mercy, desires for each one of us to choose to do those things that will help us to flourish.  The offer to turn and live is unconditional.


Thinking of your own life, where do you need to apply the Gospel’s soap?
Posted by Keith Emerson at 9:20 AM No comments: