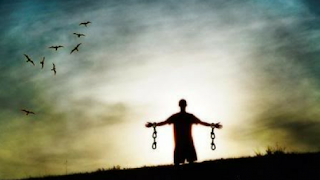 Allow me to set today’s gospel reading in context.  Jesus has been travelling on foot with a small entourage, going from town to town and village to village teaching and healing.  He is ready for a respite and suggests they get into a boat and set sail for the other side of the lake – gentile territory where they can be alone for a while.  Once under way, Jesus falls into a deep sleep while a storm is brewing.  His disciples, some of whom are skilled mariners, grow into a panic as the vessel takes on more water than they can bail.  They wake Jesus.  To their amazement, he commands the storm to be still and it abates.  His leisurely vacation is not off to a good start and it is about to get worse.

The moment Jesus sets foot on land he encounters the most bizarre figure in the entire New Testament – a man possessed by a multitude… a legion… of demons.  This dude is violent, tormented, and a danger to himself and others.  The folks from the nearby town are so disturbed by him they take him to a cemetery and chain him to a tomb.  But even this cannot contain him.  He breaks free of his restraints and haunts his creepy domain.  Here, naked, crazed, bruised, bloodied, and covered in his own filth, he and his demons confront Jesus.

Think about this poor soul.  Mentally, he literally is out of his mind.  Spiritually, he is possessed and tormented.  Physically, he is beaten and battered.  Socially, he is a complete outcast.  If you or I were to encounter such a person not only would we cross the street in order to avoid him, most likely we would take off running in the opposite direction.  But not Jesus.  Even though he is seeking relief from the rigors of his ministry, Jesus is able to look deep into is person, to perceive his humanity, to affirm his dignity, and to restore him to health and fullness of life.  The conversation Jesus has with his demons is brief, but intense.  He orders them to leave the man and Legion is made whole.

Now, once the villagers learn Jesus has healed the demonic, you might expect them to bring all their sick and infirmed to him.  This is what happens almost everywhere else Jesus goes.  But Legion’s healing comes at a great expense to the local economy.  Jesus gives permission for the demons to possess a herd of swine and as a result the creatures drive off a cliff and drown in the sea.  Their herders suffer a severe financial loss and it likely creates food insecurity for the entire village.  At the very least, the cost of bacon is going to skyrocket and there is no doubt who is responsible.

So, far from being overjoyed, the townsfolk continue to reject the man.  They want nothing to do with him and they want nothing to do with Jesus, who they unceremoniously invite to leave the region.  It is at this point the man makes a request of Jesus, “Let me follow you, let me get away from this place and these people as quickly as possible.”  The ‘follow you’ is code language in the gospels.  It means the man wants to become a disciple.  This story unique in that it is the only time Jesus tells a person who wants to follow him to stay put.  “I want you here, in this place, to do the work of ministry among your people.”

Why do you suppose Jesus wants him to stay with the very people who have treated him so badly?  I think the answer is fairly straightforward.  Jesus wants the man’s presence (his face, his body, his very being) to confront the community’s prejudices and to challenge its conventions.  Everything about how the man will go about living out the Good News is going to grate against the fabric of his society.  Jesus knows it and Jesus wants it to happen.  Legion’s very being will witness to the dignity of every human being.  He will be an embodiment of God’s kingdom breaking forth in our world.

I think about the people I have known whose life fits into this ministry niche.  They are recovering alcoholics and drug addicts, cancer survivors, people who have managed to find their way forward after a devasting loss, and people who have found the strength and courage to live with, embrace, and (in some cases) find a way to thrive in the midst of a personal or family challenges which will never go away.  I think of people who have risen above rejection, humiliation, blaming, and shaming.  Each demonstrates for us what today’s psalmist means when he or she writes, “O, God of my strength.”  Some of you who have inspired me are right here in this place this morning.

And I think about the countless people I have been blessed to know and serve who, like Jesus, have the ability to look past what on the surface, apparent to all, in order to see what God sees… a beloved creation worthy of respect, dignity, and love.  Again, some of you who do this are here with me now.

One final thought.  When Hollywood delivers a blockbuster, it loves nothing more than a sequel.  Very little frustrates me more about the gospels than how they provide little or no follow up on the lives of the people whom Jesus touches.  Case in point… Legion.  What happens to him?  Is he ever welcomed and embraced by his townsfolk?  Does his witness open them to receive the post-resurrection preaching of the early church?  Heck, does his name “Legion”, which was a reference to his many demons, revert back to his birth name (perhaps Herald)?  While in this life we will never know for sure, I am confident his witness – like the witness of so many of you – deeply affected many people.

Thanks be to God for seeing in each of us, given our many challenges and weaknesses, something which the world does not and cannot see.  Oh, if we could be blessed with the eyes of Jesus to see in each person we meet what God sees.

Posted by Keith Emerson at 10:27 AM No comments: