The Slave Girl and Her Son 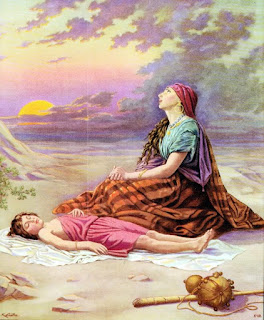 You are forgiven if you do not remember the story of Hagar from your Sunday School days.  It is a sordid tale most likely skipped over by the curriculum and/or your bashful teacher.  Legend holds Hagar is the daughter of an Egyptian Pharaoh who is given to Abraham’s wife Sarah as a gift.  Hagar becomes her slave.

You know the primary drama of Abraham’s and Sarah’s life revolves around their inability to have a child, even though God has promised to make their descendants as numerous as the stars in the night sky.  When she is well-past the age of conceiving, Sarah conceives her own plan to fulfill God’s promise.  She presents Hagar to her husband hoping a child will be born through their relations.  For his part, Abraham seems more the willing to do his part.

Well, Hagar becomes pregnant and will give birth to Abraham’s first child, a son… Ishmael.  But before this happens Sarah becomes jealous and treats Hagar harshly.  The pregnant slave girl flees into the wilderness where an angel of the Lord appears to her, promises she will be safe, and instructs her to return to Sarah.  From this point forward, Hagar addresses God as El Roi – the God who sees me.

Eventually Sarah conceives and gives birth to Isaac.  Ishmael is in his early teens at the time.  It is not hard to image the relationship between Sarah and Hagar is riddled with tension and bad feelings.  This is the background story to today’s reading and now you know why it wasn’t a part of your Sunday School education.

So, today’s reading.  Did you notice Ishmael’s name never appears in the text?  He is referred to as “the son of Hagar the Egyptian”, “her son”, “the boy” “the son of the slave woman”, and “the child”.  Nowhere does it state Ishmael’s connection to Abraham, his father.  Even God does not identify him by name.  Ishmael’s life is in jeopardy and everyone speaks about him only in the third person.  It is completely and thoroughly dehumanizing.  Having been treated this poorly, is it any wonder the angel who encounters Hagar when she is pregnant tell her that her son will grow up to be “a wild ass of a man whose hand shall be against every man, and every man’s hand against him; and he shall dwell in the face of all his brethren” (Genesis 16:12)?

It is also curious that Ishmael’s big offense (according to the text) is Sarah sees him “playing” with his toddler half-brother.  Now the Hebrew word used here has some dark overtones.  Some versions of the bible translate it to read Ishmael was mocking Isaac. Because it is the same word used later in Genesis when Potiphar’s wife’s, in a lie, claims Joseph tried to make sport of her by sleeping with her, it is possible Sarah observes some type of molestation.  Another tradition holds Ishmael was sacrificing insects to a toy idol, in which case his play activity would have been a bad influence.  Yet another tradition holds Ishmael was using a bow to shoot arrows at his half-brother.  Whatever Sarah observes, her reaction to it is swift and volatile.  She demands the slave and her child be cast from the house, expelled from the land, and cut out of any inheritance.

While we hold all Scripture to be inspired by God, this does not preclude individual writers from having an agenda.  In this case, there is ample evidence the author of this account has a significant bias against Ishmael.  We see it in the lack of identifying him by name and we see it in the use of an ambiguous verb slyly hinting at scandalous behavior without any further supporting evidence.  Most likely the author takes this slant because he knows Ishmael goes on to become the patriarch of the Arabians just as Isaac becomes the patriarch of the Hebrews.

Even with its biased perspective, three amazing things about this story cannot be erased.  First, just as God appeared to Abraham years earlier to call him to a new homeland, so God appears to Hagar in the wilderness; first when she is pregnant and second when her situation is desperate and her son is near death.  It is the first time in the biblical record that God hears the cries of a person in need and responds.  It is as if a significant portion of God’s character and disposition has remained untouched and untapped until this moment.  Hagar is the first person ever to experience the part of God’s nature and personality that one day will deliver the Hebrew people from slavery in Egypt, that the Psalmists will cry out to time and again, that the prophets will come to know as being decidedly for the poor, the oppressed, the outcast, and the foreigner, that Jesus and the New Testament writers will proclaim desires to deliver us from the bondage sin in order to thrive in the new life of Spirit.

A second truth in the story not easily hid is that God makes the same promise to Ishmael that God makes to Isaac: out of each a mighty and numerous people will arise.  God blesses both sons and their descendants.  We may want to claim God cares only for our tribe and despises others, but the biblical record states otherwise.  God’s blessing falls on all God’s children, regardless or race, nationality, or political persuasion.

And a final truth – especially relevant today, Father’s Day – while the writer may not have held Ishmael in high regard, it is obvious his father Abraham cares deeply for him.  He has his son circumcised in order to be a part of God’s covenant promise.  He agonizes over Sarah’s demand to banish the mother and child, and consents only after God tells him not to be distressed.

Over the years, extra-biblical stories continue to emerge about Ishmael, just as they do about Abraham.  Both Jewish and Islamic traditions hold Abraham makes journeys into the desert to visit Hagar and Ishmael.  Muslims locate Mecca as the site where God reveals the water to Hagar and gives the blessing.  Here, Abraham discovers the ka’aba – the large black cube said to have been built by Adam.  Damaged by the flood in Noah’s time, Abraham and Ishmael come together to restore it.  When their work is completed Abraham calls on all creation to make a pilgrimage to Mecca – an act which to this day remains one of the five pillars of Islam.

Some traditions hold Abraham marries Hagar after Sarah’s death.  The bible records Isaac and Ishmael come together one final time to bury their father.  Like most biblical narratives, the stories of Abraham, Sarah, Hagar, Ishmael, and Isaac are not told primarily to give us answers, but rather to challenge us by posing difficult questions.  We are not called to follow their examples as much as to question their actions, ponder the consequences, and look to God for wisdom and guidance in our own day.  What is this story stands out to you as something particularly relevant in our time?