Jeremiah - the Prophet not the Bullfrog 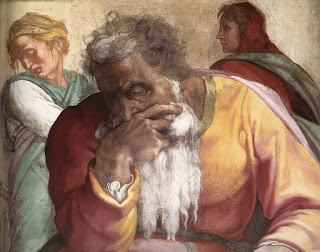 In spite of what we children of the 70’s may think, Jeremiah was not a bullfrog.  He was chosen by God at birth to be a prophet and called to this ministry while just a youth.  His career spanned the reign of five different kings.  It began during a time of national and spiritual revival and endured the untimely death of the reforming king.  He cried out against a return to evil ways, warned of Jerusalem’s destruction, survived the devastation inflicted by the Babylonian army, suffered through the exile, and eventually preached a message of hope and restoration.


Most books of the prophets tell us much about the prophet’s message, but precious little about their lives.  This is not so with Jeremiah.  We read about how he was imprisoned, threatened with death, violently beaten, thrown into a cistern, placed in stocks, interred in a dungeon, persecuted by family members, and confronted by false prophets – kind of pales the challenge of working with a difficult Vestry.  God forbade Jeremiah to marry, have children, or foster friendships.  He lived a lonely life.  Coupled with his dismal message and the events of his day, Jeremiah had as difficult a life and ministry as is imaginable and yet remained faithful.


In today’s reading he challenges the message of other prophets claiming they are speaking only their own dreams while his words are faithful to God’s word.  God’s word to Jeremiah includes the following:


God’s people have broken their covenant with God by forsaking God and making material things (called idols) the object of their heart’s desire.


God’s people have polluted their faith by mixing it with the practices and beliefs of Baal worship, going so far as to offer child sacrifices to this pagan deity.


God’s people have fallen into persistent sin which manifests itself through pride, lack of gratitude for all God gives, adultery, oppressing foreigners, insufficient concern for widows and orphans, lying, slandering others, and ignoring the Sabbath.


For these and other offenses God announces to Jeremiah invaders from the north (the Babylonian army) are being sent to destroy Jerusalem and take captives into exile.


I hold God’s laws not to be arbitrary.  God did not set up a dartboard at the beginning of creation with fifty spaces on it, throw ten darts, and come up with random commandments to put on tablets.  The sins Jeremiah identifies are offensive to God because they are destructive to human community and flourishing.  God’s people are doing more than turning away from God.  They are embracing practices harmful to themselves and to others.  An invading army does more than destroy their society.  It saves them from themselves by paving the way for new and healthier possibilities.


Jeremiah says the other prophets are speaking dreams they claim to be God’s, but their intention is to get people to focus on them rather than on God.  Their dreams are self-serving.  Their dreams are not God’s dream.  Can there be a more important question in our time than this: “What is God’s dream for the world?”  As we approach the 15th Anniversary of 9/11 and as we sift through the political rhetoric of a presidential campaign, I have been thinking more and more about God’s dream for us.  What is it?  Who speaks for it?  Who shows it to us?  Like the question of Thomas to Jesus, “How can we know the way?”


A good number of you have asked me what I think about the upcoming presidential election.  You don’t ask because you want to know whom you should vote for or whom I am voting for.  You ask because you are concerned, worried, anxious, and deeply troubled by the choices.  You can’t vote for either major candidate and are mystified and appalled that it has come down to these two people.

John Pavlovitz is a pastor in Raleigh who posts on a very thoughtful blog site called Stuff that Needs to be Said.  Earlier in the week he wrote this:


This election season is an X-ray, revealing something about the core of who we are.  It is illuminating the insidious Cancer that we find ourselves presently afflicted with.  It is showing the anger and racism and homophobia, and most of all the toxic fear embedded deep within the marrow of America.


35 percent of this country doesn’t care how ignorant of the issues Donald Trump is, how untruthful he is, or how low he stoops—none of that matters…


We have become this frightened, this angry, this vulnerable, this divided—together.


Churches, politicians, corporate America, public servants, working folks; ordinary people of every color, creed, and persuasion—we’ve all had our hand in it.  This has been created on our watch.


No matter what happens in November, this is where we are now.  This is who we are now.


This is the country we’ve all built together, and this is what we’ll have to deal with together.


Yes, we should be afraid and embarrassed and disgusted right now.


But don’t look at Donald Trump, America—look in the mirror.


This is our mess.


Pavlovitz identifies something very important in our reading from Jeremiah.  The dreams of the false prophets only get traction when they speak to actual hopes and dreams.  The people of Jeremiah’s day would not have fallen for them or fallen down before them if they didn’t portray a reality they craved.  Neither do we in our day.  We are where we are because we have not wondered what God’s dream for the world might look like and when we have wondered we have found it to be not as appealing our own dreams.


I think it is in this context we can make sense of Jesus’ words in today’s gospel reading.  As we turn away from God’s dream and as we engage in behavior destructive to ourselves, Jesus responds not with kindness, but with fire.  He brings not peace, but division.  Those who seek after God’s dream and attempt to live into it will be as foreigners, sometimes even in their own family.


When God first called Jeremiah God told him this: “Behold, I have put my words in your mouth.  See, I have this day set you over the nations and over the kingdoms, to root out and to pull down, to destroy and to throw down.”  Jeremiah has been very faithful in doing this to the best of his ability.  But God told him something else.  God said, “I am putting my words in your mouth and setting you over nations and kingdoms to build and to plant”.  For God, it was not enough to have a prophet who would point out all that was wrong.  God needed a prophet to point to what is good, to what can bring life, and to what can bring flourishing for all.


What Jeremiah sought to build up from the ruins and what he intended to plant was a message of hope and possibility:


He taught God would bring a remnant back to Judah to rebuild Jerusalem and the temple.


He said God would raise up a descendant of David to serve God and guide God’s people.


He proclaimed God would reunite the northern and southern kingdoms of Israel so there might be a unified Kingdom of God.


He promised God would heal the spiritual wounds of the people and restore the covenant.


We in the Christian tradition hold Jesus is the embodiment of Jeremiah’s hope.  We build with him and we plant with him because we find in him what God’s dream for all people looks like.


Today’s reading from Hebrews lists a number of figures from the original covenant who looked to God in faith and hoped for a better day.  And then, in another one of those verses I had to memorize as a youth, writes:


Therefore, since we are surrounded by so great a cloud of witnesses, let us also lay aside every weight and the sin that clings so closely, and let us run with perseverance the race that is set before us, looking to Jesus the pioneer and perfecter of our faith, who for the sake of the joy that was set before him endured the cross, disregarding its shame, and has taken his seat at the right hand of the throne of God.


The ‘therefore’ tells us this is the summery point of all the author has laid out before.  Because of all this… do the following: Lay aside sin.  Persevere.  Look to Jesus always.  Follow his example.


We are living in what feels like a weighty time.  My sense as we approach the 15th Anniversary of 9/11 is many of us are contemplative.  We are wondering what we have done right as a nation and as a human family.  We are wondering what we have done wrong.  And we are wondering how we should move forward.  Today’s reading from Jeremiah reminds us how seductive some dreams can be and it reminds us how challenging it can be to get back on the path God has laid for us to walk.  I don’t know how real change – God’s dream – can begin other than it has to begin with me.  And it has to begin with you.
Posted by Keith Emerson at 10:31 AM No comments: