On Politics, Religion, and Being a Like a Harp 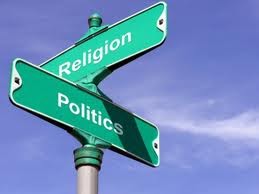 When creation was finished God gathered together all the hosts of heaven. God was particularly pleased with the planet earth; boasting that it was a place of great balance. “Balance?” asked the archangel Michael. “Yes,” said God. “Look, here is a continent that is very hot while that one over there is very cold. This region gets lots of rain while this other one is a desert. Everything is in balance.” Pointing to one specific area of land, Michael asked, “What do you call this place?” With great pride God answered, “Oh, that is Virginia. It is the most glorious place on earth. There are beautiful mountains, rivers and streams, lakes, forests, hills, and plains. The people from Virginia are going to be handsome, modest, intelligent, and humorous, and they are going to travel the world. They will be extremely sociable, hardworking, high achieving, carriers of peace, and producers of good things.” Michael was very impressed, but also confused. “What about the balance?” God smiled and said, “Well, right next to Virginia is Washington, D.C. Wait till you see the idiots I put there.”


Today’s readings invite us to talk about something even those of us raised in the north know is not appropriate conversation in most settings: politics and faith.

The story of Naboth’s vineyard reads like breaking news on the latest scandal to rock our government. The wimpy Ahab and the scheming Jezebel seem like caricatures of contemporary political figures. The entire episode reminds us how difficult it is for public figures entrusted with political power to refrain from using that power for personal gain. We expect those we elect to office to serve the public, not to be self-serving. The framers of our constitution would have heard this story as a cautionary tale on the scope of government. Power given to the central state is power that can be brought to bear against the people, or in Naboth’s case, against a specific individual.

I had the most amazing experience this week listening to talk radio. I have XM in my car so I follow political talk on a station called “Patriot” and on one called “Left.” Guess which perspective each expounds. Well, on Monday, for the first time ever, the commentators from both stations agreed on an issue. All saw the government’s action to collect and store the data of private citizens as being a dangerous over-reach and an abuse of power. Coming on the heels of the IRS scandal, it raises sobering questions as to how personal information could be used or misused today as well as down the road.

We Americans highly value both our privacy and our security, but there are times when these two values are in conflict. Since September 11th we have been willing to sacrifice certain aspects of privacy in order to gain a greater sense of security. Perhaps the time is right for us to have a thoughtful, informed public conversation regarding how to balance these two cherished values. What concerns me most is how people in the shadows are making decisions with sweeping consequences without public knowledge or public consent.

If the first reading leads us to politics, then the Gospel reading leads us to faith. Jesus is eating a meal at the home of a religious leader, a Pharisee. His name is Simon and he seems to be genuinely interested in Jesus and in what he has to say. At one point in the conversation he even addresses Jesus with the honored title of “teacher.” A woman from the city identified as a “sinner,” which means she was a prostitute, slips into the house with a jar of ointment and tearfully begins to caress Jesus’ feet. In our culture something like this would be shocking, to say the least, but it was much more common in Jesus’ day. Notice that Simon objects not to the act, but to person. He protests that Jesus should know what kind of woman she is; that she is a sinner.

When religion is at its best it builds on what is strong and good and healthy in each one of us rather than harping on what is wrong. When religion is an authentic expression of God’s love it draws a wide circle that is inclusive of all people, not a narrow one that excludes some, let alone most. Yes, we want religion to remind us that certain behaviors and attitudes are destructive, but each time we proclaim this it must be accompanied by the assurance of forgiveness and promise of new life. And every time we detect a speck in the eye of another, the religion Jesus promoted helps us to see the log in our own.

Ultimately, the thing that links Jezebel, Ahab, and Simon is that none can see past their own needs, desires, or prejudices. For each it is as if others do not exist. That is a dangerous perspective in a person holding political power and it is a dehumanizing perspective when wielded by a person honored with religious authority.

One of Mary Oliver’s new poems speaks to this, but gets at it from a different direction. Listen to carefully to The Moth. The Mountains. The Rivers:

Who can guess the luna’s sadness who lives so
Briefly? Who can guess the impatience of stone
longing to be ground down, to be part again of
something livelier? Who can imagine in what
heaviness the rivers remember their original clarity?

Strange questions, yet I have spent worthwhile
time with them. And I suggest them to you also,
that your spirit grow in curiosity, that your life
be richer than it is, that you bow to the earth as
you feel how it actually is, that we – so clever, and
ambitious, and selfish, and unrestrained – are only
one design of the moving, the vivacious many.

Perhaps even more than goodness, what Jezebel, Ahab, and Simon lacked was curiosity. Neither the king or queen were at all curious about Naboth; about who he was or why his ancestral land was so important to him. Simon was not at all curious about what led the sinful woman down the road she took and he certainly was not curious about what was in her heart. None of the three understood themselves to be a part of the “vivacious many.” For each it was only me, what I want, what I know, what I believe, what I decide.

I never have been one for preaching much about politics, although if you know me you know I definitely have political views. I don’t preach about them for two reasons. First, I don’t believe in using the bully pulpit and second, I don’t believe if I did it would make much difference. I could preach about healthcare or tax reform or various scandals from now until sunset and it would not change a thing. I can’t change the world from this pulpit, so rarely do I try. There will always be self-serving politicians and there will always be short-sighted religious leaders. But I can change me, and I can encourage you to change too.

Gregory of Nyssa, the 4th century bishop, gave this instruction to converts preparing for baptism:

God made human beings to share in his goodness. To that end he endowed our nature with great potential so that it could attain an excellence in all manners, and thus grow towards the origin of all perfection…

Just as sight is an activity of nature and blindness is a privation of this activity, so virtue stands in the same kind of antithesis to evil. The origin of evil can only be understood as the absence of good. If you remove light, darkness ensues; if light is present, darkness does not exist. In the same way, as long as good is present in nature, evil as such is non-existent; withdraw goodness, and you have the beginning of its opposite.

Gregory taught his converts that we are endowed with God’s virtue and goodness and that whenever and wherever we choose to exhibit God’s goodness evil does not exist, just as darkness disappears in the presence of light. It is up each one of us to choose what we will do with God’s gift.

You and I have very little control over what “those idiots in Washington do.” We have only marginal influence over events in our national church and diocese. But we have complete control over ourselves. We can choose to do right by the Naboths of our lives. We can respect the dignity of every human being, even (and especially) the sinners. We can cultivate curiosity in order to understand that we are just one of many, but we can also know that our single light casts off an element of darkness for those around us.

This being Father’s Day I want to encourage us dads to be mindful of the light we cast in our families. I read recently of an interesting property shared by harps. If there are two harps in a room and they are tuned to the same frequency, when a chord is struck on the bigger harp it fills and infuses the smaller one with the grandeur and beauty of its resonance, thus bringing the smaller harp into its tuneful harmony. The smaller harp is then able to sound out its tune in its own voice. Dad’s, and mom’s, if you live into God’s goodness it is not likely you will change something in Washington, but it is very likely you will set a tone for your children and your family and your neighbors and your coworkers and your fellow parishioners. Your tone will bring a light, it will banish a certain amount of darkness, and it will help others to live out the goodness God has infused in them. This is within your power. It is up to you to decide what your witness will be.