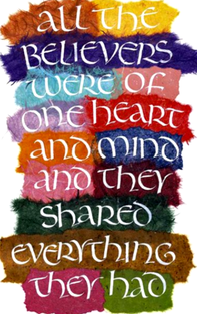 I suspect the search for Utopia began not long after Adam and Eve were banished from the Garden of Eden once the human focus shifted from getting back to what was lost to forging a path toward what might be.  The word utopia, first coined by Sir Thomas More in a work of fiction published in 1516, is a compound of two Greek words – no and place.  But just because utopia doesn’t exist doesn’t mean people have stopped looking for it… or trying to create it.

Those who seek to create a utopian society typically are motivated by religious belief or social theory (or both).  Of the two, communities centered around religious affiliation historically have fared better.  Those organized solely on collective principles have tended not to hold together for any significant length of time.  Many of the religious communal settlements in our country arose out of the Second Great Awakening of the late 18th and early 19th centuries and were fueled by the European Reformation, persecution, and immigration.

One such community was established in Zoar, Ohio about an hour’s drive from where I grew up.  Founded in 1817 by a group of German separatists fleeing religious oppression, it was named after the biblical town to which Lot fled after leaving Sodom.  The commune began with an initial purchase of 5,000 acres on the banks of the Tuscarawas River; a transaction financed by a loan from Pennsylvania Shakers.  All land and possessions were jointly owned and managed by regularly elected trustees.  The group benefited greatly from the construction of the Ohio Canal in 1830 and subsequent business it brought to the area.  Rejecting baptism and confirmation, the people of Zoar recognized no religious observances, with the exception of the weekly Sabbath.  They created a garden in the center of their town based on a description found in the Book of Revelation.  The town’s hotel, renowned for its German cuisine, catered to presidents as well as paupers.  With the passing of Zoar’s charismatic leader in 1853, the community went into gradual decline, eventually voting to disband in 1889.  Zoar was just one of scores of such utopian communities that flourished for a while, then disappeared.

In this morning’s first lesson we find the church in a utopian moment at a point very, very early in its history.  How early?  While the text isn’t precise, it appears to be no more than two or three months after the resurrection.  Jesus has ascended into heaven and the Holy Spirit has come on Pentecost.  While the Apostles wait anxiously for the Lord’s return, they fill their time preaching, healing, baptizing, and remaining watchful.  And they care for one another, making sure no one is in any kind of need.

The text tells us “those who believed were of one heart and soul, and no one claimed private ownership of any possessions, but everything they owned was held in common.”  Everyone sold what they had and gave the proceeds to the Apostles who then made distributions as needs emerged.  Clearly no one was thinking about planting a crop, let alone planting a tree, because Christ was coming at any moment to establish a new Kingdom.  This was not a time to eat, drink, and be merry.  It was more a time to care, share, and remain aware.  All could be of “one heart and mind” because all shared in the common belief of the Lord’s imminent return.

I have heard more than one colleague refer wistfully to this passage, wondering how the early church could get it so right and we in today’s church have it so wrong; what with our allegiance to private interest and capitalism.  But they miss is a central truth about human nature.  We can no more create a sustaining, thriving commune than we can hold our breath in order to live under water.  It is not in our nature nor is it in our best interest.  And, in time, the early church learned this first hand.  Crops needed to be planted.  Oil for lamps needed to be purchased.  Tunics needed to be washed and darned, and darn it if some people did not “do their part.”  Eventually, St. Paul would have to put in writing, “If a person will not work, neither shall he eat.” (2 Thess. 3:10).

Both Jamestown here in Virginia and Plymouth in Massachusetts were founded on communal principles and both suffered several years of depravation until each realized the need to grant private property to its members.  While the residents of each community still were required to work for the common good (such is the nature of a pioneering enterprise), the early years of famine and hardship abated only after individuals could reap the benefits of their own labor.  For better or worse, this is how human nature is wired and any system which does not account for it is doomed to fail, even if it is managed by well-meaning believers guided by Jesus’ chosen Apostles awaiting the Lord’s return.

Eventually the early church’s focus on common property diminished, allowing the intended benefit to emerge into prominence – the care for those in need.  And the early church cared deeply about the needs of its most vulnerable members, establishing the ordained ministry of Deacons to tend to it.  By most accounts early Christians lived incredibly generous lives and won converts more through their humanity than through their preaching.  And we are the heirs and standard bearers of their example and witness.

A few weeks ago I did something for only the second or third time in 34 years of ordained ministry.  I made a general appeal for contributions to the Rector’s Discretionary Fund.  It had gone into arrears because its primary source of income - public worship with regular offerings - had been cut off.  In addition, during these difficult times, the need for assistance from the fund has increased dramatically.

When I was first ordained clergy discretionary funds could be used for a variety of purposes.  In addition to helping people in need, clergy were permitted use it to purchase books, attend conferences, buy clergy shirts, and offset any other number of unfunded professional expenses.  Almost every priest I knew maintained a private checking account to serve as a fund to be used at his or her discretion and most banks waved regular fees because it was seen as charitable work.  As you might expect, this process was somewhat loose and ripe for abuse.

For the last twenty years or so discretionary funds rightfully have been restricted to meeting the needs of people experiencing hardship.  The funds now are maintained by the church and checks are cut by the treasurer at the request of the priest.  While this may not seem completely discrete, as one person from the Presiding Bishop’s office once said to me, “If you can’t trust your treasurer to be discrete, perhaps you need a new treasurer.”

Well, as I said, I made a special appeal to you for discretionary funds and you responded.  As of the end of this past week you all have contributed almost $5,300.  Just shy of $1,000 of this has come through the Lenten Mite Box offering.  I am very grateful for your generosity and promise to administer what you have given as effectively and generously as I know how.

This is one way we at St. Paul’s live into the early church’s concern for one another.  Another way is through the variety of outreach ministries our parish sponsors and supports.  Sadly, as you know, most of this has been put on hold since the beginning of the pandemic.  Please keep our Vestry in your prayers as we meet tomorrow evening to discern how we can begin again to extend care to our neighbors and our neighborhood.

I suppose two things remain consistent throughout the history of the church.  First, we hear God calling us to tend to the needs of others.  God calls us into communities which need to have caring as one of their primary hallmarks.  And second, how care is expressed and administered changes time and time again.  Old methods become outdated or no longer possible to manage.  New possibilities and opportunities continually emerge.  Individual members of the community sense a personal call to utilize a specific gift, talent, or passion in a way that helps others and glorifies God.

This, I think, is what St. Paul’s wants from each of us.  We are not looking for you to bring all your possessions to the church so we can sell them and give away the money.  It simply is not practical and, in fact, our facility would not function well as a warehouse.  What we do want is to help each of you tap into your unique gifts, help you to discern a calling, and assist you by mobilizing others who want contribute in some form or fashion to the vision, leadership, and effort your offer.  It is a process as old as the early church and from time to time – such as this time – stands in need of renewal.  What stands true throughout is our desire to share God’s love, especially with the least, the last, the lost, and the lonely.

Posted by Keith Emerson at 10:11 AM No comments: