The Bread of Life at Babette's Feast 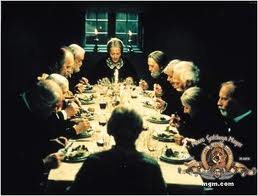 Jesus said, “The bread that I will give you for the life of the world is my flesh.”

Karen Blixen, who wrote under the pseudonym Isak Dinesen, is best known for two works: Out of Africa and Babette’s Feast – both of which were turned into critically acclaimed motion pictures.  Babette’s Feast tells the story of small sect of Lutherans living in an isolated, impoverished Norwegian fishing village that is laced  with muddy streets and dotted with thatched-roof hovels.  Led by their white-bearded founding pastor, the puritan group, having renounced all worldly pleasures, wears only muted-colored clothing and adheres to a strict diet of boiled cod and gruel.  They fix their hope on another land, gathering every Sabbath in a plain, white-walled, unadorned church to sing old hymns like “Jerusalem, my happy home, name ever dear to me” and they believe the surest path to a future bliss is to deny oneself of earthly delights.

The old pastor, a widower, has two beautiful, devoted daughters, Martine and Philippa.  A young cavalry officer once spent a summer in the village with his aunt, and tried to court Martine, but she resisted his advances, choosing duty to her father and the community over her own personal happiness.  Another man came to the village for a time.  He was a famous Parisian opera singer.  Philippa had a stunning singing voice and when the man heard her on a Sunday morning he wanted her to return with him to France where, properly trained, all of Paris would fall at her feet.  She too resisted in order to remain with the sect.  Austere living was so deeply ingrained in both sisters that the world’s life, with its promise of possibility and pleasure, simply was too overwhelming.

Thirty-five years pass and the sisters are now middle-aged spinsters.  They have carried on their deceased father’s mission, but without his leadership much in the sect has changed.  It membership has grown older.  No one new has been added.  The parishioners have fallen out with one another over various matters.  Yes, they still meet on the Sabbath and, yes, they still sing the same old hymns, but only a handful attend and the music has lost its luster.  Through it all, the sisters remain faithful, organizing services and making meals for the elderly members of the village.

Then one rainy night there is a knock on their door.  It is a woman named Babette who has been sent to the village from Paris by the opera singer.  Her family has been killed in a civil war, her fortune has been taken, and she is fleeing for her life.  She carries a note from the singer begging the sisters to have mercy on her.  The note also indicates that Babette can cook.  Martine and Philippe take her in, exchanging room and board for household chores.  They show her how to split the cod and boil the gruel.  They introduce her to the townsfolk and she even begins to participate in Sabbath services.  Slowly, but surely, Babette brings new life to the stagnant community and to the bland meals they are used to receiving.

After twelve years of faithful service, a letter arrives for Babette from France.  It is from the opera singer.  He informs her she has won ten thousand francs in the lottery – more than enough for her to return to Paris and resume her life.  As it happens, the news coincides with plans the sisters are making to celebrate the 100th anniversary of their father’s birth.  Babette approaches them with a request: “In twelve years I have asked you for nothing.  Please let me cook for you a real French dinner for the celebration.”  The sisters believe that tongues are meant for singing praise, not for indulging in exotic tastes, but are aware that Babette has never asked for anything, so they agree reluctantly.

Babette throws herself into the project.  Boats begin to appear at the town dock with strange cargo – creates of small birds, the head of a cow, fresh vegetables, truffles, pheasants, ham, exotic creatures from the sea, a huge turtle, and even champagne!  All of it starts to pile up in the sisters’ kitchen.

On the evening of the anniversary a snow has fallen, covering the dreary village in a beautiful blanket of white.  Twelve guests gather at a table Babette has laid out with china, silver, and crystal.  The room is decorated with evergreens and bathed in candlelight.  The members of the sect have agreed in secret to sit in silence during the meal, reserving judgment until the end.  One of the guests, a late addition to the party, is Martine’s long ago suitor – now a general – who has returned to the village to accompany his aunt to the dinner.  With each dish and drink that is served, the general cannot not withhold his lavish praise: “Incredible!” he says; “The finest I have ever tasted,” he remarks.

As the meal unfolds, the food and drink begin to work their ways on the guests.  Slowly their tongues loosen and the conversation begins to flow.  There is laughter and joy and the letting go of long-held slights.  They recall with fondness the old pastor and the days his spirit gathered them together as one.  The group becomes so relaxed that at one point in the meal when a lady burps out loud the man next to her, without thinking, blurts out, “Hallelujah!”

The general, on eating the main course of the meal, says, “There is only one place in all the world where I have tasted baby quail prepared en Sarcophage… the famous Café Anglais in Paris, a restaurant once renowned for its female chef.”  That chef is indeed Babette, who has labored in service all these years with the sisters.

After the final dish has been served, the general rises and makes a speech:

“We have all of us been told that grace is to be found in the universe.  But in our human foolishness and shortsightedness we imagine divine grace to be finite… But the moment comes when our eyes are opened, and we see and realize that grace is infinite.  Grace, my friends, demands nothing from us but that we shall await it with confidence and acknowledge it in gratitude.”

At the end of the meal, the old-timers go outside, circle the town well, join hands, and lustily sing an old hymn.  If the meal has been a communion scene, this becomes a baptismal moment as the disciples of the old pastor come to the Christian faith in a new way; the way of joy.  Inside, in the kitchen, is Babette.  She is exhausted as she sits among the unwashed dishes, greasy pots, grisly bones, broken crates, vegetable trimmings, and empty bottles.  “It was quite a nice dinner,” Martine says to her.  Philippa adds, “We will remember this night long after you have returned to Paris.”

It is then that Babette informs them she will not be going home.  All of her family and friends have been killed.  There is no one there for her any more.  The sisters inquire, “But what about the money?  What at the ten thousand francs?”  “It is all gone,” she tells them.  She has spent every penny of it on the dinner they have just enjoyed.  It was equivalent to the cost of a typical dinner for twelve at her café.

The meaning and the message of the novel, while layered and complex, boils down to this: grace is a gift that costs everything of the giver and nothing for the recipient.  When Jesus says “the bread that I will give for the life of the world is my flesh,” he is saying that the life he offers costs him everything and us nothing.  As the general suggests, our role is to await it with confidence and acknowledge it in gratitude.

We do both every time we gather in this place.  We come before God naming the challenges of our lives and remembering the blessings we have received.  To be a person of faith involves entrusting ourselves to God in this process we call life.  To be a person of hope involves allowing ourselves continually to be transformed into something new; something like how the elderly members of that austere sect where transformed by Babette’s dinner into people more alive than ever before.  To be a person of Christ-like love involves being open to ways that we can be channels of God’s grace, individuals and a community who gives everything so that other people might know what it is like to receive God’s love at no cost to themselves.


Posted by Keith Emerson at 5:21 PM No comments: