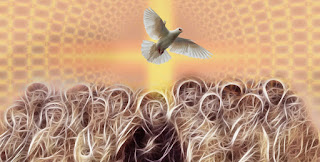 The Day of Pentecost / Year C

In settings with clergy colleagues, I have a knack for asking questions in a way which fosters conversation.  It is a skill born both of curiosity and fear.  Curiosity, because I always want to know about the motivations behind a person’s thoughts, the process leading to a decision, or potential paths forward (as examples).  Fear, because I don’t want to come off looking like an antagonist, a naysayer, or an idiot.

Examples.  Years ago, at a clergy conference back in the Diocese of Virginia, the bishops were being peppered with question after question about national church issues.  It was an important conversation, but it had reached a contentious point and I sensed it was time to rehumanize the moment.  Knowing each of the three bishops delighted in their role as grandfathers, I asked this question, “Can you tell us about your grandchildren and the time you have been able to spend with them recently?”  It changed the entire tone of the gathering.  At one meeting of the diocesan deans I asked Bishop Holly if there has been any conversation about changing the name of our annual diocesan gathering from council to convention.  His response, “I have been wondering when someone would raise this question” (look me up after church if you are interested in the story behind this issue).  At another meeting of deans, when Bishop Jay was leading a discussion on our role in the diocese, I said, “I am happy to serve as a dean for our next bishop, but how do I signal I am also willing to step aside if the bishop wants someone else in this position?”  His response: “This is an important question.”  And now, with Bishop Susan, not that anyone other than me is keeping count, I believe I lead my colleagues in getting her to response, “That is a good question”, which is infinitely better than the thing of my nightmares… “What kind of question is that!”

Given your experience, what makes for good conversation and what typically do you contribute to it?

From its root origins, the word ‘conversation’ means “a living together,” “a manner of behaving,” “a keeping company.”  It involves people with differing backgrounds, experiences, and perspectives coming together in a way which enriches their common life.  It is one way we manifest what I talked about last Sunday – being one, but not the same.

And when it comes to conversation, being one, but not the same is a challenge.  I once read of retreat where people were exploring the church’s history.  At one point each participant was asked to visualize an image they associated with the word ‘tradition’.  The responses were varied and surprising.  One person had an image of confronting an immovable fortress, threatening and ominous.  Another image was of an ocean liner moving carefully but persistently through a turbulent sea.  Someone else described encountering a compassionate sage, withered and wise.  Another participant described tradition as being like wandering in a graveyard.  Still another visualized climbing on the limbs of a giant tree that is alive, strong, and protective.  Each person on the retreat had a very different association for the exact same word.

What does this tell you?  It tells me saying what I mean and having another person take it to mean something entirely different from anything I intended or anticipated is a real possibility.  It highlights for me the importance of listening in a manner which is open and engaged.  It tells me responding in a way which seeks clarification and understanding is essential if we are going to participate in authentic, healthy conversation.

Biblical stories pick up on this theme of conversational challenge and offer interpretations for it.

The Tower of Babel story offers an explanation as to why there are so many different cultures and languages.  It ponders why conversation – living with and keeping company – is so fraught with peril.  Through the story, the ancient Hebrews derived several powerful theological assertions.  Perhaps the most forceful is the notion God wills cultural and ethnic differences.  Chief among these differences is language.  God institutes this divide specifically to keep peoples apart and distinct.  The story asserts attempting to bridge these differences is a kind of dangerous overreaching; a laying hold of a territory reserved only for God.  The story paints the picture of a God who actively works to frustrate conversation among members of the human family; who desires a keeping apart and dividing of company.

It is a theology which makes sense for a time when a small tribe of people is concerned with maintaining its distinctive culture, heritage, and religious beliefs.  As this people blends into the multi-cultural environment they call the Promised Land they need a strong theological framework to keep their identity intact.  The belief God creates the differences among peoples and actively frustrates tribes from coming together serves such a purpose.

Today’s reading from the Book of Acts functions as a bookend to the story of the Tower of Babel and a new theology emerges from it.  The Gospel event of Jesus’ life, death, and resurrection is so central to all people in all places and times that God enables the Church to converse about it in every language.  God, who had been the author of language confusion, is now the source for overcoming it.  No longer is God to be associated with just one specific ethnic group and heritage.  God is now to be associated with the Church and the Church is to be broad and diverse, gathering together under the banner of Jesus Christ.  Our new guiding theology holds God fosters conversation amongst all peoples through the work of the Church.

For the Church this means we are in the business of helping people to understand one another.  Listening carefully, being attentive to one’s own unique perspective, and speaking clearly are holy acts for which we seek God’s help.  A collect we use in Morning Prayer asks God to guide us so that the Gospel may be truly preached, and truly heard.  This prayer taps into God’s deep desire to foster conversation – a living together, a keeping company.

As someone who engages in the act of public speaking on a weekly basis and who participates in multiple conversations each and every day, I am aware of how easy it is to misunderstand and to be misunderstood.  I have been involved in numerous conversations where it seemed like the participants simply were not hearing what each other was saying.  I have witnessed more than one conversation where the speaker did not understand what he himself was saying.

But I think about those glorious times when a group of people, fogged in by their inability to understand different points of view, suddenly and miraculously are able to hear and comprehend the diverse perspectives of others in the group.  Perhaps you have never thought of it in this way, but this is the work of Holy Spirit.  It is always a Pentecostal moment when true conversation occurs, when people keep company and live with one another.

Posted by Keith Emerson at 10:07 AM No comments: