The Pattern of God in Every Person 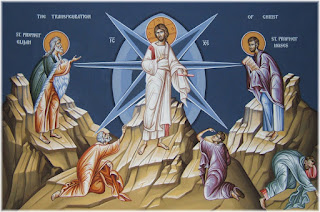 The Last Sunday after the Epiphany / Year B

When I was in college one of the school’s social groups planned an ice skating outing.  We loaded into buses and were whisked off to a rink.  When I got on the bus I noticed an empty seat next to Carol, and pleasant young women with whom I was friends, so I sat down next to her.  Now, Carol was a sweet girl, but kind of plain and non-descript, like grits with nothing else on in it.  I don’t remember what we talked about, but this I recall with absolute clarity… when she got out on the ice and began to skate she became someone entirely different.  Her skating was incredibly graceful and fluid and it allowed her inner beauty to be revealed.  That loveliness was always there, mind you.  It was just veiled… or, more likely, I was blind to it.

The word transfigured is not one we often use in everyday conversation.  In fact, I think I have heard it used only when talking about the events of this morning’s gospel reading.  Transfigured means “an exalting, glorifying, or spiritual change,” “being outwardly transformed, usually for the better,” “to transform into something beautiful or elevated.”  I tend to think of transfiguring not so much as change or transformation, but as revealing.

When Jesus is transfigured in the presence of his three closest disciples, he is not transformed from human to divine.  His humanity briefly is stripped away allowing the fullness of his divinity to shine forth.  The season of Epiphany begins with an unusually bright star guiding seekers to a home in Bethlehem in order to pay homage to one born King of the Jews.  The season ends today when the King’s full glory is revealed as he is transfigured in dazzling light.

So here is my question:  We know Jesus, the Son of God, was transfigured, but is it possible for a human being to experience transfiguration?  Is it possible for you or for me to have a moment or moments when something holy and holy other inside of us becomes readily apparent?  Watching the videos of the Capital on January 6, we saw firsthand how a mob mentality can reveal the absolute ugliest, most sinister, evilest aspects of ourselves, but is the opposite also possible?

Eastern Orthodoxy holds strongly to an idea known as theosis, or the deification of all people.  Athanasius of Alexandra taught “God became human so that humans could become godlike.”  This transformation leading to union with God is known as theosis.  It is a process involving catharsis (purification of the body and mind), and theoria (illumination through a vision of God).  Through this process Athanasius says “by virtue of grace humans become what God is by nature.”  The Eastern Church teaches this is not something to be experienced merely by saints or those ordained, it is the purpose of all human life and it is achievable for anyone through cooperation with God’s work in the world as well as in our lives.

The early Church understood this to be the message of the Gospel.  And it wasn’t just intended for individuals.  God’s work in Christ is intended to transform all creation.  It wasn’t until centuries later, in the darkness of the Middle Ages, that the Church began to elevate personal salvation above personal transformation by teaching Christ’s work was to deliver us from hell rather than teaching it was to bring about the divination of all things.  It is a shift still dominating our spiritual consciousness centuries later.  I’ll bet no one has ever knocked on your door and asked you how you are partnering with God to bring about a new heaven and a new earth (a question rooted in theosis), but chances are good someone has asked you if you know where your soul would go if you were to died tonight.

Not to put one person on the spot, but several years ago I saw it in Doug Russell.  It was the Friday morning of the start of a diocesan council and he, John Rector, and I were relaxing in the time share John always arranges for us.  Doug was on the phone talking one of his employees through a situation.  He did it was such wisdom, gentleness, and patience, instilling confidence and competency in the person he counselled.  Perhaps it doesn’t sound very dramatic (and it wasn’t).  I suspect for Doug it was all a part of another day’s work and most likely he doesn’t even remember it, but in my eyes it was a truly amazing moment.  That, I thought, is how a godly person uses power and influence to lead others.  That, I thought, is how Jesus engaged people.  And I could tell stories like this about many of you; stories about when I saw you in a transfigured moment.

I cannot define for you what God is.  I can only say that my work has proved empirically that the pattern of God exists in every person and that this pattern has at its disposal the greatest of all his energies for transformation and transfiguration of our natural being.  Not only the meaning of our life but our renewal and [the renewal of] our institutions depend on our conscious relationship with this pattern of the collective unconscious.

This is what I see as I witness any one of you being transfigured… participation in the pattern of God.

Many of you join us for Evening Prayer at least once or twice a week.  If so, you know the service begins with a variety of optional sentences from Scripture followed by one of several prayers.  I like to pair this reading from Matthew with the prayer that follows:

Jesus said, “You are the light of the world.  A city built on a hill cannot be hid.  No one lights a lamp to put it under a bucket, but on a lamp-stand where it gives light for everyone in the house.  And you, like the lamp, must shed light among your fellow men, so that they may see the good you do, and give glory to your Father in heaven.”  (5:14-16)

Grant us, Lord, the lamp of charity which never fails, that it may burn in us and shed its light on those around us, and that by its brightness we may have a vision of that holy City, where dwells the true and never-failing Light, Jesus Christ our Lord.  Amen.

The reading and the prayer speak of our potential to be transfigured; by the grace of God to have the light of Christ shine in us and through, becoming a blessing to those around us.

This morning we kneel with Peter, James, and John in awe of the sight of the transfigured Christ.  And we also respond to the fearful possibility we too might be joined with Christ, transformed into God’s nature, and shine forth with a holy, heavenly, healing light for the betterment of all creation.

Posted by Keith Emerson at 9:14 AM No comments: