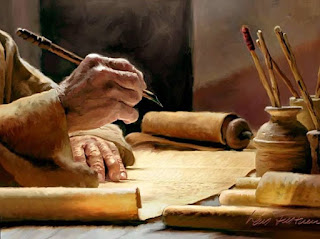 Jesus said, “Every scribe who has been trained for the kingdom of heaven is like the homeowner who treasures what is new and what is old.”


What is your first memory of learning something?  Obviously you learned a lot from a very young age, but what is your earliest memory of a learning?  Mrs. Griffin was our elderly neighbor.  I remember sitting in her kitchen when I was four years old as she laid out a handful of toothpicks on the table and showed me how to arrange them to spell my name.  I can still visualize the moment my name became more than a sound, it became an image.


My kindergarten “Report of Progress” card states “the fundamental purpose of kindergarten is to help the child make the adjustment from home to school and to lay the foundation for future formal education.”  As such, it chronicled how I was doing in such categories as takes part in group work, conversation and play, shows helpfulness toward others, behaves courteously, respects property rights, listens, relaxes at rest time (a skill I have mastered!), thinks, chooses and works independently, works up to ability, uses materials creatively (paint, wood, clay, etc.), follows directions, controls self, is cheerful, is self-confident, observes safety rules, and responds to and participates in musical activities (the first half of the year my mark in this area was “is improving”, which is better than “seldom”, but in the second half I am proud to say I improved to “usually” – the highest mark possible).


I am sure you are familiar with Robert Fulghum’s “All I Need to Know I Learned in Kindergarten.”  Reviewing my report card I see again the truth of his insight.  Those early lessons form the core of who I am.  They are the oldest part of me and I carry them forward with me to this very moment.  How I live in to them continues to evolve.  These old truths become new every day.


I grew up in an age when children went to Sunday School every Sunday.  Classrooms had a poster where each of our names was written and we got a checkmark on it for the particular week we were present.  At the end of the year students who never missed a Sunday were given a certificate for perfect attendance.  More received one than did not.  Can you imagine!  I don’t remember a single lesson from back in the day, but we had a weekly memory verse and glued cotton balls to popsicle sticks in a way that was supposed to look like sheep.  While I don’t have a particular recollection of a specific learning, these Sunday experiences also form the core of who I am.  They instilled in me old truths that I make new every day as I seek to live them in our changing world.


Jesus calls us “scribes of the kingdom of heaven.”  Scribes were teachers of the law.  They first appear after the return from exile to Babylon.  The Temple has been destroyed and the walls around Jerusalem are in ruins.  The nation needs rebuilding.  During this work someone unearths the scrolls of the bible.  Several generations have passed since they were last read or taught.  Everyone gathers to listen and soon learns the infrastructure is not the only thing needing attention.  God’s people must learn God’s law and then learn how to live it.  Scribes become the teachers and while they did not issue Reports of Progress, they were tasked with helping God’s people make the adjustment from life before knowing the law to a life of living the law.


By Jesus’ day, some 400 years after this beginning, the role of the scribe has morphed from teaching the law to enforcing a legalistic interpretation of it.  Imagine if someone took all those kindergarten categories and wrote out in exacting, specific detail how to fulfill each one.  Well, with four centuries of accrued applications, this is what the scribes require of the people.  How awful are the results?  Well, Jesus runs afoul of the scribes when he heals a person on the Sabbath, a day on which the scribal law says you can do no work.


Ours is a dynamic tradition where God’s will is continually discerned by being steeped in what is old and engaging in what is new.  For whatever reason, we Episcopalians seem more willing to embrace this notion than most other Christian denominations.  We are not afraid of what is new.  In fact, we are willing to consider how what is new may in fact be a better expression of what is old than our previous understanding.


Forty-three years ago yesterday, 11 women stood before an Episcopal bishop at a church in Philadelphia and took the vows for ordination to the priesthood.  They became known as the “Philadelphia 11” whose ordination was tagged as being “irregular.”  It would take another three years before the church decided women could be ordained “regularly” and while the ecclesiastical process was messy, it illustrates one way our church lives into Jesus’ image of being a scribe of things new and things old.


David Gushee is a columnist for the Religious News Service.  In an article titled “My visit to the land of teenagers”, he writes about his recent experience taking a group of young people on a week long retreat.  The last time he had “attempted” youth ministry like this was 1986 when Ronald Reagan was in office.  Much has changed since then.


He noted most of the participants were born after 9/11 and have no memory of it.  Rather than having a consciousness shaped by historical events, Gushee observed how these teens are shaped by “an encyclopedic knowledge of contemporary music and online reality.”  Even though these teenagers grew up in a church (and in the south), they have very little familiarity with the bible.  Gushee realized quickly that “bible” is no longer a language spoken at home or in the world of our children.  He had to start with the very basics: how the bible is organized and how the system of book, chapter, and verse works.  To their credit, Gushee notes the young people are eager to master what he is teaching them.


Also hopeful is how today’s youth are asking the very questions asked in the bible: why is there suffering in the world, what makes life meaningful, what does social justice look like, is there a right and healthy way for me to embrace my sexuality, do I matter?  We are scribes of things old and things new in this critical conversation.


Take a look at the world around us and if you don’t like the way it looks, then you realize we have not yet achieved fully what God’s dream looks like when understood through Jesus.  Our world needs “improving.”  More than ever it needs scribes who can master what is old and apply it to what is new – not in a reactive way stating what we need to do is return to the values of old (and here, what is meant, is the way the values of old were manifested), but in a way which engages the new with the old.


God’s dream for the world as expressed through the life of Jesus continues to emerge.  We had not grasped it fully prior to 1974 when women were not permitted to be ordained in the Episcopal Church.  We are so much richer now.  But we are not there yet.  “Is improving” is not the same thing as “Usually.”  We scribes of the new and the old have our work cut out for us.  Thanks be to God for the promise God’s Spirit will always be with us to guide us.
Posted by Keith Emerson at 10:32 AM No comments: