A Tree in the Forest 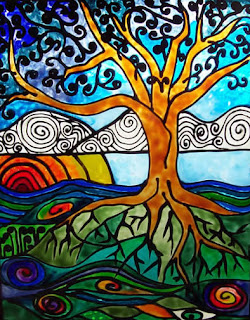 Suzanne Simard had a mystery on her hands.  Working for a logging company in British Columbia, her job was to inspect the health of saplings planted on timbered land.  Consistently she found they were not doing well at all.  Many died and all lagged in growth compared to volunteer shoots arising naturally out of the ground.  Eventually she came to discern how the company’s method of planting – digging a hole down into clay, putting a sapling into it, and filling is with soil – was in fact not working.  The idea was to allow the hole to collect water which, in theory, should sustain the sapling and help it to grow by avoiding “competition” with other trees and plant life.  It actually served to isolate the sapling from the richness of the forest’s soil, in which various organisms were working in harmony to share for the benefit of all.

Over time Simard discovered forests are not just a collection of individual trees, but diverse, complicated, and interdependent circles of life.  The forest’s soil, which includes fallen leaves and decomposing materials, allows for vast interconnections between trees through fungi and all other manner of stuff.  They actually create a network and a community which allows for communication between trees; fostering vitality and alleviating vulnerabilities.  Remarkably, “Mother Trees” (as Simard calls them) tend to their offshoots.  They can distinguish between trees they produced and trees they didn’t.  Everything in the forest floor contributes something something else needs and receives something something else produces.

Fungi, Simard discovered, attach to tree roots in order form a beneficial relationship.  The tree provides sugar (which it creates through the process of photosynthesis) and the fungi provides nutrients (which it takes from the soil).  The fungi fan out throughout the forest and attach to the roots of other trees, creating something known as the “mycorrhizae network.”  This system allows trees to communicate with and support each other.  For example, an evergreen tree will send sugar to nearby trees during the time they are leafless.  The process reverses when a leafy canopy prevents sunlight from reaching the branches of the firs.

The reason the logging company’s reforestation method was not working, Simard concluded, was because it thought of trees as isolated entities rather than seeing a forest as interdependent community networked together for the mutual benefit of all.

The magnificent biblical Psalter begins with a breathtaking image: those who delight in God’s way and do good are like trees planted by streams of water.  Their roots are deep enough and broad enough to touch the sustaining resources necessary for a happy and productive life.  It is not difficult to image how the psalmist happened upon this metaphor.  Much of the Holy Land is a dry and arid landscape – little more than rocks and dusty dirt.  Trees and plants attempting to make a go of it barely eke out a living.  But ribbons of green run throughout the region.  These are places were steams (some seasonal and other sustained) allow for plant life to flourish.

So the psalmist looks at this and ponders what is necessary to sustain human life as a stream supports a tree?  His or her answer is a life centered in God.  In our lives we need a sense of rootedness deep enough and broad enough to be connected with God.  Only this will weather us through harsh and barren times.

The prophet Jeremiah picks up on the image of a tree planted by water but applies it in a slightly different way.  Whereas the psalmist focuses on virtue (goodness verses wickedness), Jeremiah’s hones in on something else.  Those who trust in mortals are like trees in the wilderness.  In the day of trial, counting only on their relationships, they will be disappointed.  Those who trust in God will have all they need to endure whatever might come their way.

I know something of what Jeremiah is saying.  People in our lives will let us down.  And we will disappoint people who count on us.  Hence, the reason we soon will engage collectively in the General Confession.  But I wonder what Jeremiah might say if he knew of the work of Suzanne Simard.  I think I know what she might say to him.  Our world is complex and interconnected.  None of us can make it on our own.  Yes, the tree needs the water, just as we need God.  But the tree also needs other plant life if it is going to flourish and be fruitful.  We, like the trees, need one another.  We need to trust in mere mortals.

I can’t remember if I have told you before about the time I was on a leadership team which led a large group of teenagers on a weeklong bike trip taking us around Lake Erie, into Canada, and eventually ending up at Niagara Falls.  Halfway through the week we had to send home one young man.  I won’t bore you with the details, but essentially he kept doing what he wanted to do with no regard for how it affected the health and safety of the group.

Not everyone on the trip agreed with the decision.  The night after we sent him home, I addressed the young people and invited them to ponder where we were and what we had accomplished so far.  We were spending the night in a remote church somewhere in Canada.  “How many of you could be here on your own?  Would your parents ever let you get on your bike, ride a ferry across Lake Erie, enter a foreign country, and settle down here for the night by yourself?  Could you have accomplished what you have accomplished so far on your own?  We are here tonight because we have come together.  We could not be here without each other.  And we could not be here if we did not put the good of the group ahead of our individual preferences.”

Yes, the righteous are like a tree planted by a river, drawing from God all things necessary for a good life.  But we are also like Suzanne Simard’s trees, an interconnected forest supporting and benefiting from one another.

In my sermon a few weeks ago I said we will be focusing on gratitude during Lent.  I said gratitude is an awareness of how other people contribute to our lives and how without those contributions our lives would be impoverished.   I hope my musing of the image of a tree from today’s readings will help you to see in it this essential truth.

Posted by Keith Emerson at 11:59 AM No comments: