Judas & a Woman I once Met 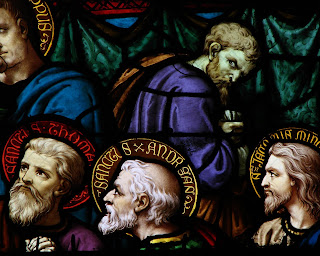 
Allow me to read for you a poem by Georgie Starbuck Galbraith titled “Old Tears in Galilee.”  Listen closely and see if you can figure out whose tears are being described:


No woman has ever borne a child
and worshipped his eyes and the way he smiled,
and reacted with pride at his first clear word;
Who bound up his hurts and loved his absurd
fierce concentration, watching a spider;
Who saw him grow till he stood beside her,
straight and tall as a mountain pine;
No woman who had a son like mine
ever believed that aught than good
could come of this fruit of her motherhood –
no woman ever believed – not I!


That this life of her life was born to die as mine,
going down from Nazareth to Jerusalem
and sorrow and death.


Do you think you know yet who is speaking these words?  Keep listening…


I only know what is done is done,
and I weep for Judas… I weep for my son.


Galbraith’s poem startles us by challenging us to see the humanity of Judas.  It asks us to see him as someone who was loved by his mother, and from there to recall how he was a friend to the other disciples and a champion of social causes – especially to God’s call to care for the poor.  John, in his gospel, reminds us Jesus thought enough of Judas to wash his feet and to share with him the bread and wine of Last Supper – all the while knowing what was in his heart.


We may want to see Judas only as being one of the chief villains in all human history, but Galbraith’s poem challenges us to realize even he brought light into the world.  And Jesus loved Judas   not just those aspects that were good, but all of Judas; from the dirt on his feet (which he washed on the night of his arrest) to the darkness in his soul (which he knew all too well would led to history’s most infamous betrayal).


Medieval preachers pointed out that Peter sinned almost as greatly by denying Christ as Judas had sinned by betraying him.  Could not Judas have repented?  God will forgive any sin.  In fact, they pointed out, Judas even followed the steps of repentance: he confessed his sin to the priests – “I have betrayed innocent blood” – and made restitution – flinging back the thirty pieces of silver.  But Judas, unlike Peter, did not stay with the other disciples and open himself to God’s mercy.  Still, rejecting, still withdrawn, certain of his damnation, he went out and hanged himself.


Have you ever pondered this before?  Unlike Peter, Judas did not return to the disciples and to the community of faith.  Rather, he cut himself off from the place where God’s mercy is made known.  Perhaps this is the only real difference between Peter and Judas.  Though his sin was great, Peter remained in the community and it was here the Risen Christ met him and it was here he received the grace necessary to go on with his life forgiven and healed.


I was fresh out of seminary in 1987 and hired to assist the rector of a parish on the shores of Lake Erie.  He tasked me with visiting lapsed members and there were a lot of people on the parish rolls who fell into this unhappy classification.  Each afternoon I went off to knock on the doors of two or three people who had not been involved in the parish for a number of years.


I will never forget calling on one woman who was in her seventies.  While I don’t recall her name, I remember much of the gist of our conversation.  I led off with my typical opening, “Tell me a little bit about yourself.”  She responded, “Well, my husband died in 1958.”  Now, I wasn’t born until 1959 and it shocked me to think over the entire span of my life nothing had happened in her life significant enough to mention before this.


At some point our conversation came around to her history with the church.  Some twenty years before a previous rector angered her when he refused to baptize her grandchild because the family now lived out-of-state and did not attend a church.  She was so angered by his decision she stopped attending church all together, even though there are hundreds of other churches in the Cleveland area – dozens of them Episcopal – which she could have joined.


What was the effect, I wondered, of her turning away from the community of faith?  Perhaps at the time it made some sort of impression on the community as a whole.  Maybe she gave a handsome pledge or served on the Altar Guild or was the driving force behind a yearly event.  The fallout happened so long ago there was no way for me to know if her leaving registered in the life of the parish.


However, it was evident the decision for her was catastrophic.  It was almost as if her life had stopped.  Nothing meaningful had happened to her in 29 years to heal the devastation of losing her husband.  No flower given, no book read, no prayer offered, no service rendered, no task completed, no grace received in nearly three decades was significant enough to alter her self-identity.  As I pondered the many wonders, joys, sorrows, and blessings that filled my years over the same course of time I wanted to weep for that woman.  But hers was a self-imposed prison and the gates unlocked only from her side of the door.


There is an old folk tale about Judas that holds he gradually comes to himself sometime after his death.  Regaining consciousness he finds himself in utter darkness, lying flat on his face on dank ground oozing with filth.  He is exhausted.  For a thousand years he lays there agonizing over what he has done.  Then with a groan he rolls over and, face up for the first time, he sees a tiny point of light high above him.  He realizes he is in a deep pit – a hole with sheer sides made of slime and mud.  For 5,000 years he climbs, groping upward and sliding back down.  At the end of 5,000 years, his hand grips the top edge of the hole, and he pulls himself out until he lays grasping on the ground above.  After another thousand years he regains his strength and looks up and sees Jesus and the eleven, sitting at a table, resplendent in glory.  There is one vacant seat at the table.  Jesus looks at him and says, “Judas, we have been waiting for you.  Come and take your seat.”


Today, as we gather in the shadow of the Cross, we consider what is cost to form the Christian community of faith.  Our Lord and Savior paid for it with his very life, but he considered the grace and mercy made known through it to be worth the sacrifice.  For some, this day is a call to return to what Christ’s death makes possible.  For others it is a call to continue to extend to all the love and grace and mercy made known to us in and through this place.  For all, it is a call to remember no one is beyond God’s love.  Christ’s arms stretched out on the Cross are open wide to embrace the whole world.
Posted by Keith Emerson at 11:35 AM No comments: