A Kingdom of Mercy 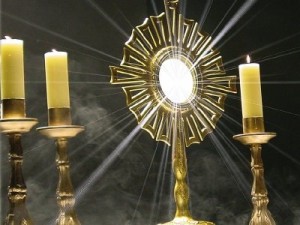 In the year 863, King Harold becomes enamored with Gilda, the daughter of Prince Eric of Hadaland.  He sends messengers to propose a marriage.  Gilda replies she will never marry Harold as long as he reigns over only a few provinces rather than the whole of Norway.  Rather than be discouraged, Harold regards the message as a summons to glory.  He assembles his troops, attacks all the other chiefs, captures their provinces, and executes his competitors.  In so doing, Harold wins the hand of Gilda in marriage.

Now this is what we expect from kings of old.  They are bold, entitled, ruthless, irrational, and above all victorious.  Kings get their way, take what they want, and are indifferent to the concerns and opinions others.

Thus it is we come to this day – Christ the King Sunday.  Today’s assigned reading from the Gospel of Luke suggests the reign of Christ is not at all what we might expect it to be.  Jesus is dying on a cross while being mocked by soldiers, onlookers, and even a criminal who is being crucified with him.  This is not a scene of triumphant kingship.  It suggests not victory, but defeat and no king gains a kingdom through defeat.

Bishop Hollerith, in a sermon he preached earlier this month at the National Cathedral, observed many readings from Luke turn on reversal. The sinful tax collector is justified, not the religiously observant Pharisee.  The hungry will be feed, but woe to those who are full now for they will be empty.  The mighty and glorious Temple will be destroyed.  And today, Jesus on the cross reigns as King.  Luke is challenging our expectations.  He is telling us God works in ways we don’t always see or understand.  And he is suggesting we need to act in a different way if we want to be a part of the Kingdom of God.

Jesus speaks just twenty-four words in today’s reading as he hangs on the cross in in so doing makes just two “royal” pronouncements.  “Father, forgive them; for the do not know what they are doing.”  “Truly, I tell you, today you will be with me in paradise.”  His words speak of reversals.

The path into Jesus’ kingdom is unlike any other. “Forgive them.”  Victory is equated not with conquest, but with remaining true to who God calls you to be, no matter what the circumstances you face.  Last week we named this as enduring.  Reigning, normally thought of as dominating others, becomes equated with mercy, which is defined as “compassion or forgiveness shown toward someone whom it is within one’s power to punish or harm”. Note that the person who has the power in the relationship is the only person who can offer mercy.  Jesus can call down an army of avenging angels, but does not.  He forgives.  He can reject the plea of the penitent criminal, but offers an embrace.  His reign is a reign a mercy.

Vinita Hampton Wright is senior editor at Loyola Press and recently worked on Pope Francis’ book The Church of Mercy.  She writes some interesting reflections on what mercy looks like in everyday life:

Mercy relinquishes control when doing so allows another person to grow and learn.  Mercy makes it his business to help others succeed.  Mercy clears the way for others, so that they can walk on an even path, no matter how halting their steps or injured their souls.

In all these situations, mercy treats power as a sacred trust.  I can be merciful because I have some sort of power, the means to affect another’s life, if only for a moment.  I act mercifully when I use my power to do kindness in this world.

I was at a conference recently, and it was interesting to observe how the well-known, powerful people wore their power, how they responded to others’ admiration, how they spoke to those who were not so well-known or admired.  Some used their power to make room for others and invite their voices; others used their power to dominate the space and the conversation.

In my own work, I have achieved a certain level of expertise and others’ respect.  When I sit in a room with colleagues, they feel the weight of my opinions.  With a sentence or a glance, I can crush or I can encourage.  I can open up the conversation or shut it down.

Most of my sins involve failure at mercy.

Each of us has power in our lives.  It may be broad and expansive, or it may be able to affect only one or two people.  Because we have power, we have the potential to be merciful.  It is very challenging to be merciful – to make a space to learn and grow for a person you have power over – when a person who has power over you is not merciful.  It is so easy to come home after a hard day at work and take it out on the kids.  “Most of my sins involve a failure of mercy.”

In a reversal of sorts, Vinita Hampton Wright moves from reflecting on how mercy is manifested through one’s use of power to describing tale-tell signs in seemingly insignificant events:

My mercy will not show up in grand gestures, and most of the time mercy reveals itself in fleeting moments.

For example, mercy gives you his seat on the bus, acting as if he was about to get up anyway rather than making you feel that he is doing you a favor.  Mercy does not let out that sigh -- you know the one -- the wordless disapproval toward the person in the check-out line ahead of you whose card didn’t swipe, or who can’t find her coupons, or whose toddler is having a meltdown.  Mercy offers quiet sympathy and does not convey with her body language that this holdup is ruining her day.  Sometimes mercy chooses not to send back the food that isn’t just right, simply because the waitress looks overwhelmed.

Early in his ministry, Jesus sits on a hillside overlooking the Sea of Galilee and teaches his followers about the essential nature of his vision.  Perhaps the single most important insight into the Kingship of Christ is this:

Blessed are the merciful, for they will receive mercy.

If you open up a space for others to learn and grow, the power and the energy and the creativity responsible for all that is seen and unseen will make a space for you to learn and grow and flourish.  If you use your power to dominate others you will find Jesus’ power will not bend to your benefit.  Jesus reigns as King whenever and wherever any one of us makes the choice to be merciful.
Posted by Keith Emerson at 10:33 AM No comments: