Encountering the Essence of God's Glory 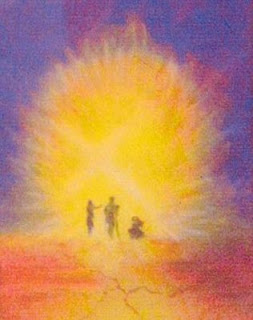 Well, I know the Christian calendar says today is the Last Sunday after the Epiphany, but in truth it feels like a national day of mourning – the First Sunday after Football. Did you watch the Super Bowl last week? I turned on the TV about half an hour before kickoff; in time to see Ray Lewis interviewed by Shannon Sharpe, a former teammate. Sharpe asked Lewis about two people who were killed after Lewis won the Super Bowl several years ago in Atlanta. The Baltimore linebacker was implicated in the murders and eventually pled guilty to Obstruction of Justice. No one has ever been convicted of the deaths and many questions still linger regarding Lewis’ involvement. “What would you say to those families,” Sharpe asked. “It’s simple,” Lewis said. “God has never made a mistake. That’s just who He is, you see.... To the family, if you knew, if you really knew the way God works, He don’t use people who commits anything like that for His glory. No way. It’s the total opposite.” The implication is chilling: Lewis’ on-field success is proof of his innocence. Moments after winning this year’s Super Bowl, Lewis, overcome with emotion, shouted into a microphone, “If God is for you, can’t no one be against you.” Ray Lewis is a vicious tackler, a sure fire Hall of Famer, and a brutal theologian!


We bristle when we meet someone who is a little too chummy with God; who has God’s ways all figured out – and figured out in such a way that always seems to coincide with his or her own desires and self interest.

In many ways, what I know with the greatest certainty of God is that I know little if anything at all about God. I believe in the power of prayer and know personally how it affects my life. It is something like turning on a radio and tuning into a particular frequency. That signal is always there, always around us, but we only hear it when we turn on the radio and listen. When I tune in to God through prayer, I find strength, hope, courage, direction, joy, forgiveness… many things, things of God that are always there. It is not like God is completely absent. But I when I pray I do not get the sense that I am encountering the full essence of God’s glory. Moments like that, if they happen at all in one’s life, are very rare.

Our lessons this morning describe two such experiences. From the Old Testament we read of Moses encountering the true essence of God’s glory. It is an event so profound that it changes Moses’ very appearance. His face literally radiates God’s glory. It shines to such a degree that people are afraid to approach him. Moses must wrap his face with a veil whenever he is in the presence of other people.

The other encounter takes place on a mountaintop when Jesus is transfigured in the presence of Moses and Elijah. Peter, James, and John witness the event. At first words fail each of them until Peter suggests they build shrines for each of the three figures in order to remain in this luminous moment forever. And why not, once you are completely in the presence of God, where else is there to go? Certainly not down the mountain to the messy world of healing the troubled and rebuking evil.

We have a record of Peter’s preaching in the Book of Acts and we have in writing two of his letters. It is significant that when preaching or writing about Jesus, Peter refers primarily to three episodes that form the core of his own faith. He does not mention how Jesus calmed the storm or walked on water or cured the sick or raised the dead. Instead Peter describes Jesus’ suffering, his resurrection, and the transfiguring on the mountain. This from 2 Peter 1:16-18:

“We had been eyewitnesses of his majesty. For he received honor and glory from God the Father when that voice was conveyed to him by the Majestic Glory, saying, ‘This is my Son, my Beloved, with whom I am well pleased.’ We ourselves heard this voice come from heaven, while we were with him on the holy mountain.”

This was for Peter a life changing experience, eclipsed only by encountering the Resurrected Lord.

I spent some time this week rehearsing the events of my life and pondering if I have ever come close to encountering the full essence of God’s glory. Yes, there are many times I felt I have been in God’s presence. I have experienced a healing that I consider miraculous. I have been transported through prayer and praise to a holy dimension. But I don’t know that I have ever encountered the full essence of God’s glory in a way close to what Moses or Peter experienced.

I found myself thinking back to my first year as a priest when I ministered to Richard who was battling cancer. He and his wife were good people; the kind of folk you know you like and can trust from the moment you meet them. Richard put up a courageous fight, but cancer got the better of him. His family and I gathered around his hospital bed on a Friday evening. Richard was to have both feet amputated in the morning. Blood clots had become more of a threat than the cancer. The doctor walked in and talked with Richard, saying there was very little to be gained by the surgery. All agreed and it was called off. There, in that room, we took communion and to this day when I say the words, “It is a right and good and joyful thing, always and everywhere to give thanks to you, Father Almighty,” I am taken back to that hospital room Eucharist where, in spite of all the challenges, for a brief moment, Richard, his wife, his children, and I were in a place and in a space where time was irrelevant and nothing else seemed to matter.

When I returned the next morning everything about Richard’s countenance had changed. He radiated something that words fail to describe. At best I would call it a deep, abiding peace, but that simply does not capture all of it. He was calm, he was confident, he was secure. He didn’t need to veil his face, but everything about him indicated that sometime in the night hours he encountered the essence of God’s glory. We talked for about two hours before I made my leave. Richard slipped away quietly about sixty minutes later. That morning visit, seeing and sensing something different in Richard, is the single most powerful experience in my ministry, and perhaps even in my entire life.

Unlike Ray Lewis, whose faith makes him cocky and self-assured about God and God’s ways, my experiences have left me speechless and humble. Like I said, the closer we come to knowing God the more we realize we know nothing at all about God.

I resonate with this poem by R.S. Thomas titled Via Negativia:

Why no! I never thought other than
That God is that great absence
In our lives, the empty silence
Within, the place where we go
Seeking, not in hope to
Arrive or find. He keeps the interstices
In our knowledge, the darkness
Between stars. His are the echoes
We follow, the footprints he has just
Left. We put our hands in
His side hoping to find
It warm. We look at people
And places as though he had looked
At them, too; but miss the reflection.

“His are the echoes we follow, the footprints [we step in that] he has just left.” That God exists I am confident. What little I know of God is overshadowed by what I do not and may never know. Still, what I know and have experienced of God fuels my need to worship, to follow, to obey, and to serve.

How tempting it is to fill the interstices of our knowledge and experience of God with what we want or need God to be. How human it seems to be to have the quick answer, the easy understanding, the domesticated theology that in effect leashes God to our own particular projection of God. It saddens and sickens me to hear a famous person say, “If you understood God the way I do you would not question ‘His’ way.” Better if Lewis had said, “If your thought process worked the way mine does you wouldn’t have a problem with my involvement in two murders.” Me, I am going to be content describing God’s footprint and what it feels like to miss God’s reflection that surly my friend Richard saw. For me, these glimpses of the holy are more than enough. They humble me. They leave me speechless. They shape and charge my life this and every day.