The Steward of a Vineyard 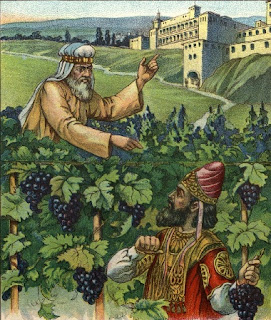 Today’s Old Testament reading continues to focus on the life and times of the prophet Elijah.  Today’s story about Naboth’s vineyard is a cautionary tale about the misuse of power.  It is contemporary in every sense of the word as we still live in a world where despots (and/or those close to them) will use the authority entrusted to them (or, in some cases, taken by them) to get what they want by any means necessary.  Surely Naboth stands as a victim.  But there is much more to him and that is what I want to explore with you.  To me, before Jezebel manipulates his stoning, Naboth is an inspirational figure who embodies what it means to be a godly and goodly steward of what has been entrusted to him.


Ancestral land was deeply valued in Israel.  It was a gift from God who commanded the people to “take possession of the land.”  The book of Deuteronomy describes the land of Israel as an “inheritance from the Lord.”  If you want to twist your tongue into a knot, go home, open your bible to the Book of Joshua, and read aloud chapters 13-21.  It describes with great specificity the boundaries between one tribe’s region and another.  This exacting detail points to the sacred nature of the land given by God who orders a census be taken and the land divided among the people.  The Book of Numbers describes which person received what lot (again, it is a tongue twister to read aloud).  It matters to God that each and every person has a plot of land.


If you own the deed to your property, it indicates on it that the land is not yours.  It may surprise you to learn you are leasing your property from the state.  The people of Israel owned their land.  It passed from one generation to another.  It was understood not so much to be a legal right as it was held to be a gift from God.  The writer of the 16th Psalm says:


O Lord, you are my portion and my cup; *
it is you who uphold my lot.


The Old Testament contains several admonitions against moving a property marker because it was both a theft against the owner and a sin against God.  God directs Israel to have a Jubilee every fifty years where land that had been sold for purposes of survival was to be returned to its original ancestral owner.


So at one level, when Ahab approaches Naboth about trading or selling his land he is asking him to forsake what God has entrusted to him and Naboth will have none of it.  His commitment is to what God has given to him.  It is more important than money or moving up in the world.  He does not want cash nor does he want to trade up for a better lot.


What has God entrusted to you?  Your spouse, if you are married.  Your children and grandchildren.  Parents, if they are still alive.  Siblings.  It is easy to let other things get in the way of family.  Perhaps you have received an inheritance or a trust fund.  While resources such as this should be enjoyed, good stewardship demands you do not consume it, but rather shepherd it wisely so that it can be passed on to the next generation.  The good you can do with what you have is more significant than the myriad of ways you might spend it frivolously.


As I have mentioned, I am in the midst of reading through our church’s historical documents and as I do so I come away with a deeper sense of how this parish has been entrusted to us by 18-some generations of faithful people before us.  We are stewards of an impressive legacy of faith and far from being a burden, it gives us a sense of perspective and purpose.  What we do here matters, not only for today, but also for generations to come.  What has God entrusted to you?


God entrusted a vineyard to Naboth.  We are not told if the vineyard was started by Naboth or by one of his ancestors, but surely it required a great deal of work and care.  The PH of the soil has to be just right.  There is planting and pruning and training and trimming.  It can take up to three years before a new plant can yield grapes.  It is no small undertaking, especially when compared to the vegetable garden the king wants to plant.


The writings of Wendell Berry reminds me of the importance land holds for each of us.  Listen to his poem The Man Born to Farming:


The grower of trees, the gardener, the man born to farming, whose hands reach into the ground and sprout, to him the soil is a divine drug.  He enters into death yearly, and comes back rejoicing.  He has seen the light lie down in the dung heap, and rise again in the corn.  His thought passes along the row ends like a mole.  What miraculous seed has he swallowed that the unending sentence of his love flows out of his mouth like a vine clinging in the sunlight, and like water descending in the dark?


Berry writes about how when we are thinking about ‘the environment’ we have made a division between it and ourselves:


Naboth is a person who understands this: the spirituality of place – how a specific place shapes and sustains us.  Just as it cares for us, we have a responsibility to care for it.  Without this connection we are diminished; we are lost.  Do you have a place like this?


We live in a transient society that creates a sense of rootlessness.  I have moved a staggering twenty-six times in my life, and while several of these involved going to college and coming back ‘home’ for the summer, I sense how modern mobility has had an affect of me – some for good, some for ill.  Are you spiritually connected to your ‘place’?  How might you build and deepen a relationship with where you?


Naboth’s ‘place’ meant something to him spiritually and this, as well as an allegiance to inheritance, were factors in why he would not sell or trade.  There is one more component.  Ahab’s palace in Jezreel was a rather new addition to the community and served as his winter headquarters.  No doubt others sold their land to the king so he could build it.  Far from being a private transaction, this kind of decision affected the entire community.  The sale or exchange of property altered the social fabric of Jezreel.


We are not told, but let’s assume, Naboth’s vineyard is the only one in the region.  He supplies wine not only for his household but for many of his friends and neighbors.  They, in turn, give to him from what they produce – wheat and honey and milk, etc.  If it isn’t produced locally it is brought in either from far away (at a cost) or done without.  Who knows what the community lost when the king bought the land for his palace, but it definitely had an impact.  Naboth was not willing to have his vineyard removed from the local economy and life of his friends and neighbors.


To be a good Christian steward is to have a place in the community.  This encompasses the work you do and the integrity with which you do it.  It involves how and where and why and when you connect with others.  It involves how you use what is yours to benefit others.  Christian stewards gratefully and faithfully accept their role in the community.  Where and how do you fit in?


Ahab is the antithesis of all this.  He has no respect for the inheritance God has given to each and every person he rules.  He wants Naboth’s lot merely because it is convenient, sitting next to his winter palace.  He cares little about the spirituality of place as he pouts and refuses to eat.  And he wants to isolate himself from the community around him: if he grows his own vegetables he will not need to go to the local farmer’s market every Saturday.


And Jezebel, well, she is even worse.  Her most obvious offense is setting up the scheme to take Naboth’s life.  Less obvious, but equally as telling, once Naboth is out of the way, she implores Ahab to “take possession of the land”.  It mimics the very phrase God speaks in promising the land to the people of Israel and thus usurps God’s rightful place and promise.


In the end this sad story is a reminder that goodness is not necessarily a protection from evil and harm.  Naboth’s reward for being a good and godly steward is found completely within the context of being a good and godly steward.  He is not delivered from his enemies.  Still, he lived his life in a way which was holy and admirable and marked with integrity – qualities no amount of money or power can procure.  He used well what was entrusted to him, connected deeply with the place where he lived, and was a part of the fabric of his community.  You may only have a single dollar in the bank or $100 million dollars or more, but the only way to be truly rich in life is to live as Naboth did.