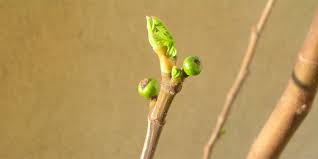 Fall continues to linger in the Commonwealth on this first Sunday of Advent – a liturgical season I associate more with snowflakes than temperatures in the 60’s.  Given this mindset, it is easy to overlook a significant element in today’s gospel reading.  Jesus employs the analogy of a fig tree beginning to bud to describe the cosmic signs indicating the coming of the Son of Man is near.


Winter is a time when daylight is scare and darkness sets in often times before we even get home.  The landscape is dormant and dreary and everything about the world ignites our homing instinct to get indoors and stay there.  Use your imagination to fast-forward to April.  The sun is climbing higher in the sky and bulbs are pushing up sprouts through the ground.  Buds are breaking out on branches and once again there is fragrance in the air.    Spring is a hopeful time as we sense the world is coming to life again and it feels like all things are being made new.


It is no accident Jesus uses the image of springtime as an analogy to describe the events leading up to the coming of the Son of Man.  While most end-time imagery focuses of cataclysmic events, destruction, and judgment, here Jesus compares it to passing from winter into spring.  Other than the owner of a ski resort, I don’t know a single person who has ever said, “Oh, I just wish winter could hang on for a few more weeks.”  By the end of February everyone just wants winter to go away.  Just as we embrace the coming of spring, Jesus says we are to embrace the coming of the Son of Man.


This morning we hear the longing of the prophet Isaiah:

O that God would tear open the heavens and come down,
so that the mountains would quake at God’s presence.


We understand Isaiah’s prayer.  There is so much in our own time that is broken, corrupt, and downright evil.  The moral capital of our society, which has been built up by the ethical virtue of generations before us, now feels like a tank of heating oil in the month of March.  Conflict between races, peoples, and cultures is tearing at the fabric of our common humanity.  It feels like our interactions with one another are more course than ever before and a violent response is an option more popular than any other time in our country’s history.  The season of Advent is a time of longing for God to come into our world and make all things right and there is much in our time in need of being made right.


Here is just one example.


I was watching an episode of This Old House this week which featured a Baltimore program called Project JumpStart.  Like most cities, Baltimore does not have enough construction workers to fill all the demand for jobs in the industry.  JumpStart is a 14-week training program helping students learn basic plumbing, carpentry, and electrical skills.  80% of the graduates land a good-paying job as an apprentice in the trade of their choice.  What is even more remarkable is the majority of the graduates are recovering addicts and ex-convicts, people most companies would never even interview.


The people who run JumpStart know the success of their program depends on employers being satisfied with the graduates they hire, thus they hold their students to a very high standard.  Students are given a daily stipend while they are in the program and producing.  But if you are late for class or your cell phone goes off or you do not present yourself professionally or if you commit any host of things not tolerated on a jobsite you lose your stipend for the day.  If the mistakes continue you are dismissed from the program.


Students enter JumpStart having failed at life but with a hope for something better.  They come out of the program not possessing all the skills they need for the trade of their choice, something they can learn as an apprentice.  The come out with the will to succeed and an understanding of what is required of them for this to happen.  Graduates of JumpStart are eager to turn around their lives and while this does not represent a reordering on a cosmic level, it is an answer to Advent hope.  It is a bud breaking forth on one branch of one fig tree.


With the beginning of the new Church year we begin a new Lectionary cycle of readings.  The majority of this year’s gospel readings will be drawn from the Gospel of Mark.  There are two competing theories regarding the purpose behind Mark’s writing.  The dominant theory revolves around the imminent destruction of the Temple in Jerusalem by the Roman army in 70 AD.  Mark foresees the threat this poses to his readers and counsels them to stay awake, to be alert, to be ready.  Things are going to change soon and not for the better.  Christians will be blamed for what happens and persecution will ensue.


The other theory holds Mark is writing to a church that has been successful in its mission and work, but now is complacent.   Believers have lost their zeal for the Gospel and no longer look for evidence of God’s involvement in the world.  Under this theory, Mark retells the story of Jesus to wake up the church, to open the eyes of the faithful in order that we might see the hand of God at work in the world.


Over the course of the year you might want to listen for evidence of each view.  Either way, each speaks deeply to a need in our time.  More and more we live life with the gnawing feeling we are on the brink of something awful.  We are tempted more than ever to pull back and protect ourselves from the risk of doing anything.  We are also conditioned to pay attention to all the things that are wrong with our world and, as I said, there is plenty on which to focus.


What would happen this Advent if you noticed “the bud on the fig tree”, if you began to see signs of hope surrounding you?  I think it might calm your fears and reinvigorate your faith.  I think it might stir your imagination as to how you can be a part of God’s work of making all things new.  In Advent we remember God’s promises and are told to be watchful for all the signs of God’s faithfulness.    I call you to be watchful this Advent and pray you will be blessed by what you see.
Posted by Keith Emerson at 3:07 PM No comments: