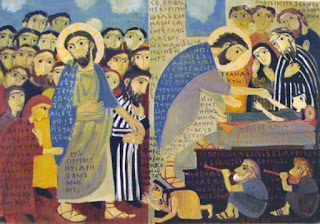 God created all things so that they might exist;

the generative forces of the world are wholesome,

and there is not destructive poison in them.

Solomon’s wisdom runs counter to what Charles Darwin discerned about the ‘generative forces’ of our world, which he described as survival of the fittest.  We can reconcile these two points of view fairly easily by acknowledging Darwin’s insight is biological while Solomon’s is theological.  Darwin identifies where we have come from – a dog-eat-dog world.  Solomon points to where we are going – a worldwide community of compassion and care expressing God’s dream for all people and all things.

And of the two, there is no question which Jesus embraces.  As God incarnate he embodies ‘generative forces’ which are ‘wholesome’ (or ‘whole-making’), completely devoid of ‘destructive poison.’  Like Solomon, Jesus assigns the corruption of God’s intent to the dominion of Hades, which is not of this world, but has entered into it.  Through his words and through his deeds, Jesus works to bind and banish the destructive deeds wrought by the ‘devil’s envy’ (to use Solomon’s language).

We see a wonderful example of this in today’s reading from the Gospel of Mark.  Recall last week Jesus was asleep in a boat when a huge storm arose and threatened to swamp it.  The disciples wake him and ask, “Do you not care we are perishing?”  Everything Jesus does from that point forward through today’s reading answers their question.  First, he commands the wind to stop.  Next, they land on the shore of Genessaret and encounter Legion, a man possessed by so many demons the local townsfolk have chained him in a countryside cemetery.  Jesus frees the man of all that torments him, everything from evils spirits to the evil intentions of his fellows.

And now today Jesus is mobbed as soon as he steps ashore at another lakeside village.  Here he will minister to two daughters of Israel, women who are connected in several different ways, yet distinct from one another.  One is a twelve-year-old girl, the other has been suffering from internal hemorrhaging for twelve years.  One, I suspect, is known to Jesus because he knows the name of her father, the other is unknown.  Both live in a time of entrenched social norms for women, meaning certain expectations are inflexible.  The women who cannot live up to what is required of them certainly experience anxiety, depression, and perhaps of host of deeper and more severe physiological and psychological maladies.

The girl’s father, Jairus, is a leader in the local synagogue.  He is educated, influential, and respected; thus he could not be more different in standing from the man Jesus just encountered in Genessaret.  Jairus is distraught because his ‘little girl’ is near death.  It is of note her father refers to her as a ‘little girl’ when in fact, in that culture, she is anything but.  Even though twelve, in her day, she is at the age when her father begins to search for a suitable husband for her.  Her marriage will be arranged; perhaps it already has been.  Does she know the man?  Like him?  Does she feel ready to be married?  The status of her father’s family will rise or fall based on who she is able to marry.  Does she feel burdened?  Pressured?  How does she anticipate this significant change in her life with enthusiasm or with apprehension?

In his book Jesus the Village Psychiatrist, Donald Capps, a professor of Pastoral Theology at Princeton University, posits the girl is suffering from clinical hysteria, most likely as a result of the cultural pressure to marry a person she does not want to marry (but he also outlines several other possibilities, such as she is the victim of abuse).  One way clinical hysteria manifests itself is through immature behavior – talking and acting childlike.  Is this why her father refers to her as ‘little girl’?  At its most extreme hysteria can lead to a catatonic state easily misinterpreted as death.  Jesus himself lends credence to this possibility by stating the girl has not died but rather is sleeping.  If Jesus knows Jairus then most likely he knows the family and most likely knows the girl and most likely has deep insight into the complexities of what is going on.  One thing is certain, when Jairus comes to him, Jesus immediately sets off to see the girl, leaving the crowd behind.

One of the people left behind is a woman with the bleeding disorder.  We are told she has seen many physicians over the course of the last twelve years, but none has been able to help.  Donald Capps notes there is little doubt their ineptitude is for them a professional embarrassment.  And he writes we can be sure they have found multiple ways to blame her for their failures.  Mark’s text speaks volumes when it notes their inability to treat her effectively has not prevented them from billing her.  We are told her resources are exhausted.  That it is a detail completely unnecessary to the telling of the story illuminates the magnitude of abuse she has endured at the hands of medical professionals.

Her culture’s expectation for women to bear children is enormous.  Her bleeding, which no doubt is related to her reproductive system, prevents her from becoming pregnant and thus she is not able to accomplish the one thing required of her to earn the sole status her society is willing to afford her.  While her material resources are exhausted, her spiritual resources are not.  Perhaps she planned on speaking with Jesus, explaining her situation, and expressing her faith so he might heal her.  But once it becomes apparent he is moving on to other things, she shifts to Plan B.  We are given insight into her private thoughts, “If I but touch Jesus’ garment, I will be made well.”

Those of you who participate in Morning or Evening Prayer online know I often invite you to offer petitions for your own needs as well as intercessions for those whose needs are on your heart.  I do so because I believe this is one of the primary reasons we come together in prayer.  As the Prayer of St. Chrysostom says, “you have given us grace to make our common supplication to you.”  Perhaps you do not come here this morning with a prayer for yourself, but I am confident each one of us here today carries a burden for at least one person we love.

In the two daughters of Israel we meet this morning we see examples of both kinds of prayer.  The woman with the hemorrhaging is an example of petition.  She brings her need to Jesus.  Jairus models intercession as he brings his daughter’s need to our Lord’s attention.  Both receive grace and find healing; one who seeks it and the other who has a person seek it on her behalf.  One reaches out and touches Jesus, while the other has Jesus reach out and take her by the hand.

And Jesus, what does he model for us?  He models the truth Solomon identified centuries earlier:

God created all things so that they might exist;

the generative forces of the world are wholesome,

and there is not destructive poison in them.

Jesus loves these two daughters of Israel not because they have fulfilled with fidelity what their culture expects of them.  He loves them because they are God’s precious children.  And in so doing, he opens for them the ‘generative forces’ God weaves into the fabric of our world.  He enables them to experience the world as God has created it to be for them.  And this same opportunity is available for you and for me every time we bring to God our petitions for personal need and our intercessions for those we love.

Posted by Keith Emerson at 8:45 AM No comments: