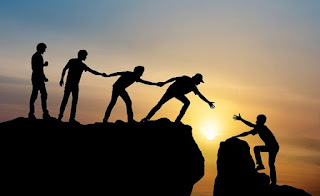 James and John exhibit all of this in today’s Gospel reading and, to make matters worse, they do it in a religious context.  They are drawn to Jesus by what?  Is it his charisma?  His authority?  His spirituality?  Something else?  Whatever it is, they want it for themselves.  They mistakenly believe it simply can be conferred upon them; like a title of nobility.  Jesus sets them straight: “If you want to be like me then you must act like me.  I am a servant to those around me and a at the disposal of all.”  His final comment, “giving my life as a ransom for many”, highlights how servanthood is a tough, life-giving business.

Do you really want to sit next to Jesus?  If so, then you may want to ponder today’s reading from Isaiah and then think twice.  Early on, the Christian Church saw the life of Christ in Isaiah’s figure of the “Suffering Servant.”  Those whom God ‘lifts up’ to ‘exulted’ places are destined not for fame and glory and power and honor, but rather for affliction and suffering and hardship and death.  Jesus (and all true servants of God) is the one who ministers on the edges of the brokenness of the world and there is no way to minister on the edges of brokenness without becoming broken yourself.  This is how Isaiah understood the roll of the Suffering Servant, it is how Jesus understands his own ministry, but it is certainly not what James and John are seeking.

Today’s story gets told differently by the Gospel writers.  Mark reports James and John ask Jesus directly if they can sit by his side in glory.  Matthew tells it a little different.  He writes their mother comes to Jesus and makes the request on behalf of her boys.  Luke suggests all of the disciples are arguing as to who among them most deserves the seats of honor.  These variations suggest we should not reserve all of our distain for James and John because their mother and (in fact) all of the disciples are preoccupied with the same ambition.  If it was just James and John, we might be tempted to point a finger at them and say they have a spiritual problem, but because it is all of them, we might want to take a closer look at ourselves.  The drive for easy and unearned affirmation pulls at all of us.

There are many official steps on the road to the ordained ministry in the Episcopal Church.  Initially, if you are interested in testing a call, and if the bishop concurs, you are made an “Aspirant” – a term drawn from the word ‘aspire.’  There is a significant and spiritual difference between aspiration and ambition.  While it is good to have aspirations, too much ambition is often seen as a negative thing.  The word ‘ambition’ comes from a Latin origin and means “a going about.”  It was used most often to describe Roman politicians who went about soliciting the votes of individual citizens.  ‘Aspire’, also a Latin word, means “to breathe upon.”

Going about and breathing upon are two very different images.  A going about, such as a politician soliciting votes, is a clear enough idea.  It brings to mind such expressions as “drumming up business” and “beating the bushes.”  It is work you do to get what you want.  You define the desired result.  Every person, every thing, every vote (to draw on the image of the politician) is a means to an end; nothing more than a stepping stone to help you achieve your ambition.

A breathing upon is a more difficult image to get your head around; especially in this time of pandemic when we are doing everything possible not to breathe on other people.  In Scripture, one image of the Holy Spirit is the Breath of God.  In Genesis, God’s Spirit/Breath moves over the chaos and begins the creative work of bringing order and goodness to creation.  In John’s Gospel, Jesus breathes on his followers and says, “Receive the Holy Spirit.”  In both instances, the breathing upon is not a means to an end, but rather a creative and life-giving gift.  To aspire/breathe upon you must be in close relationship with another, you must give of your self, and you must be willing to let your breath take on a life of its own in others.

The ambition of a going about conjures up for me the image of a busy-body; a person who is in constant motion, thinly connected to others, and typically concerned only with one’s own concerns.  When it is expressed through parenthood, it looks like adults desperately pushing their children to achievements in a misguided attempt to feel better about themselves.  The aspiration of a breathing upon is one of self-emptying; giving that which is in you to others in order that they may have life in themselves.  When you empty your life by breathing upon/giving to others, it is absolutely essential to learn how to breathe/inhale life; to receive from the riches and mercies and grace of God in order to be sustained by a breath from above so that you may continue to breathe upon someone else.

In this sense, was Jesus ambitious?  Absolutely not!  Did he have aspirations?  Most certainly.  He aspired to love and to serve and to give in the Name of the Father.  Did James and John, or their mother, or the other disciples understand what Jesus was all about?  Not at all, at least initially.  And lest we be too harsh on them, let’s admit we too struggle with this.  If you want to find God, Jesus says you must lose yourself, perhaps through the act of breathing upon others.

Where is your struggle?  Is it rooted in the struggle between ambition and aspiration?  Perhaps you do not believe there is a breath inside you that matters.  Maybe, as you exhaust your breath on others, you need to develop practices and habits which allow God to breathe into you.  Where are you in all of this?

Posted by Keith Emerson at 10:48 AM No comments: