A Tabernacle of Guppies in a Fishbowl 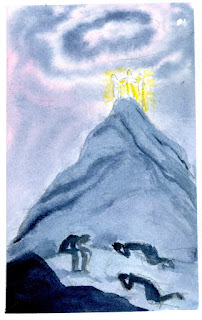 Akron, OH is blessed with a wonderful array of metropolitan parks and as a boy I loved the opportunity to visit them and hike their rugged trails.  My favorite park, far and away, is called Hampton Hills, which encompasses land above the Cuyahoga River valley and the hillside terrain, which falls down to the river’s level.  The five-mile hiking trail forms one big loop.  The first section follows a meandering stream, which it crisscrosses several times using wooden log bridges that would make Indiana Jones squeamish.  From here, the path makes its way up a steep ravine and across a lush meadow before following a circuitous route back to the parking lot.


On summer afternoons my mother drove me, a friend, and our Irish Setter to Hampton Hills and we never came back half as clean and dry as when we went – especially the dog!  I was fascinated by the park, and still am.  Tree trunks fallen across ravines waited like a tightrope to be walked.  Steep banks of dirt carved out by flash floods begged to be scaled.  A variety of critters scurrying about longed not to be spotted.


But it was the stream I loved the most.  It was alive.  It’s gentle current carried a small twig from here to there and as I watched I imagined myself small and piloting it as my vessel.  Water spiders darted about.  Guppies swam to and fro.  There was a turtle or tadpole or frog every few steps.   And all of it worked to make Hampton Hills a magical place for me when I was growing up.


One day I had a thought, the kind of thought only an eight-year-old boy can imagine: Why not bring a part of Hampton Hills home with me.  I begged my mother to let me capture some guppies and, after much badgering, she gave in.  Little Keith, armed with an empty coffee can and all the skill of a deep-sea fisherman, splashed and thrashed up and down the stream and managed to catch (as I recall it) four guppies!


I remember the ride home holding on my lap a precious tin can filled with all the wonder of Hampton Hills.  When we got home I emptied its contents into a goldfish bowl and watched my tiny friends swim back and forth in their new home.  I remember realizing just how dirty stream water is.  I reasoned, as only a child with no knowledge of environmental impact studies can reason, the fish would be much happier swimming in some nice clean water from our kitchen faucet.  To this day I don’t know which got to the guppies first; either the fluoride treated water or the boring environment of the glass bowl, but my fish survived only a day or two.  Even if they had lived, I realized my guppies swimming in grungy water paled to the thrill of going to the stream itself.


There may be nothing more human than attempting to capture something wonderful and mysterious, but it the process only creating something describable, manageable, and certain.


I think about my experience of Hampton Hills whenever I read the story of the Transfiguration.  Jesus takes three of his disciples up a mountain to pray.  At some point, he is transfigured before their eyes and the disciples observe him in his undimmed, heavenly glory.  Suddenly two figures from long, long ago stand with Jesus: Moses (the giver of the law) and Elijah (the founder of the prophetic movement).  One of Webster’s definitions of ‘mystery’ is “something incomprehensible and awe-inspiring.”  The Transfiguration is true mystery in this sense.  It is completely different from anything else in experience.  It is wonderful and glorious.  It is beyond words.


In his classic 1917 book The Idea of the Holy, Rudolph Otto analyzes various accounts of people’s deep experience of God in order to discern some common threads.  He discovers no matter who the person and no matter what the experience, every encounter with God is marked by “tremendous and fascinating mystery.”  It is an experience of a Reality that is “wholly other”, beyond human fabrication, conceptual control, and measurability.  The experience evokes in the person utter astonishment and fear; not fear as in terror, but rather fear as compelling reverence.  Otto calls it Holy Awe.  People who experience this Reality sense how finite they are in the presence of God’s majesty.  It is not unusual for a person simultaneously to be repelled from God while at the same time being drawn close, entranced and captivated by the mystery.  This, according to Otto, is how people react to an encounter with God.


Robert Frost said all religions start with a lump in the throat – a burning bush or a descending dove, an encounter with mystery.  Frederick Buechner writes “through some moment of beauty or pain, some sudden turning of their lives, most people have caught glimmers at least of what the saints are blinded by.”  I have not had a blinding experience of God’s glory, as the saints and subjects of Otto’s research have, but I have had moments where I have caught a glimmer of it.  I imagine the same is true for most of us here this morning.   Buechner says, “we are all more mystics than we choose to let on, even to ourselves.”


At the Transfiguration, Peter is the first to speak in the presence of mystery.  “It is good for us to be here,” he says.  “If you wish, we can make three booths to capture this momentous occasion.”  Now a booth is a kind of tabernacle or shrine and Peter suggests the wonder, the glory, and the mystery of what he perceives can be contained so it can be preserved.


Well, nothing can contain the glory of God, but this will not stop us from trying.  How many people in organized religion hold their particular angle on the Mystery is more important than the Mystery itself?  In reality, every system of ethics, every institution, every dogma, every ritual, every scripture, and every program of social action can become little more than a fishbowl of guppies if a person tries to say it is the Mystery and treats it as such.


I knew my fishbowl was not the stream and I would never attempt to convince anyone it was.  For me, its value rested in the way it pointed back to its source.  A person who has never been to Hampton Hills could never look at my fishbowl and sense the wonder of its origin.  You have to experience the stream for yourself in order to appreciate the dim glimmer of glory in the bowl.  You cannot force tabernacles on a person and expect miracles.  Each of us has to experience God’s mystery for ourselves.


To those of us who would try to erect a tabernacle to the Mystery, the cloud comes to overshadow us, as it did Peter.  God’s voice is heard, “This is my son.  Listen to him.”  And as they leave the mountain Jesus says to Peter, “Don’t tell anyone about what you have seen until after I have been raised from the dead.”  In other words, don’t try to speak of the mystery of God.  You can’t.  Live with it for a while.  Hasty words will not capture it anymore than erecting a booth.


Peter never did get to build his tabernacle.  Just as well.  After all of his ups and downs something more wonderful happens.  He himself becomes a tabernacle to God.  It comes as a result of living with Christ and following Christ.  Meister Eckhart, a medieval German mystic, describes it this way:


My prayer for each of us is that as God takes us into God’s mystery we will not attempt to make the Mystery one with us, but rather we will allow ourselves to become one with it.  I pray that your life will become a tabernacle of God’s love always pointing others back to its source.