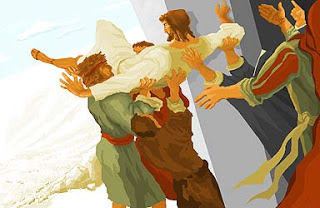 Last Sunday we heard the Gospel story of Jesus preaching in his hometown synagogue. This Sunday we read about the outcome. His friends and neighbors carry him out of the worship space and try to throw him off a cliff. It’s fair to say he was not well received. So what went wrong? The people were offended when Jesus declared himself to be the fulfillment of the Scripture and they were outraged when he refused to perform a sign or miracle for them.

We all live with the tension of having a sense of self that is developed internally verses that which is validated externally by those around us. This Gospel story describes a point early in Jesus’ ministry where these two forms of validation conflict in irreconcilable ways. Its one thing to have parents, family, friends, and authority figures greet with skepticism a childhood announcement stating when we grow up we are going to be an astronaut or a ballerina or a princess or a Super Bowl winning quarterback for the Cleveland Browns. It is something entirely different when we make a mature, well thought through decision based on intuition, prayer, and a reasonable assessment of our passions and gifts, only to have it pooh-poohed by those we hope will support and encourage us.

Ponder with me how you got to be who and where you are today. How did you discern your life’s calling? Who validated it for you? How was it challenged or tested? Lily Tomlin once said, “I’ve always wanted to be somebody, but I see now I should have been more specific.” Figuring out who you are specifically, and thus what you are to do, is one of the significant undertakings we face in life. It is easy to get it wrong, at least for a while.

I read recently a story about a naturalist who came across a baby eagle that had fallen out of its nest. He scooped it up, took it home, and let it loose in his barnyard. There, surrounded by chickens, the eagle learned to be a chicken. For a short time this is exactly what the little eagle needed, but over time it stunted its potential. Born as one of the most majestic creatures, the great bird did not know how to get off the ground, let alone fly. The naturalist tried everything he could think to awaken dormant instincts. He tossed the bird into the air, but back to the ground it fell, scratching for food in the dirt. He got out a ladder, put it against a tree, and placed the eagle on the highest branch within reach. Even this did not work. Finally he drove the eagle to a mountaintop. Standing at the edge of a high, steep face, he put the eagle on his arm and held out his arm to the sun. Slowly it happened that the great bird began to tremble. It stretched out its wings, let out a wild, screeching cry, and soared away toward the heavens.

How did you come to be the specific person you are today? Your story contains elements of internal awareness as well as external influence. Like the eagle, there was someone in your life – perhaps many people – who pointed you down a particular path. And like the eagle, there was a time when deep down inside, you embraced a sense of who you are and wanted to be. Each of us comes to be someone specific through some combination of these two polar influences.

Growing up, I greatly admired my youth minister and as early as 9th grade began to see myself doing the work he did. Others encouraged me on this path and my father even gave up on his dream that I would follow his footsteps as a chemical engineer. I entered college as a religion and economics major. Along the way, while doing actual ministry as a volunteer, I learned that this can be difficult work. Not everyone wanted to hear what I had to say about Jesus. In fact, some people really didn’t want to hear about it all. I was very discouraged by these failures and after graduation was completely unsure what I wanted to do.

I connected with an Episcopal Church and was hired to do youth ministry. After two years the rector told me in no uncertain terms that I was called to the ordained ministry and that I was going to seminary, so off I went. What began in me internally and was validated by others had gotten away from me. It came back to me because another person put it there. A few years later a seminary professor said to me, “Keith, it is easy for God to get people like me and you into the ministry because there is nothing else we want to do.” He was right and that was the moment I embraced internally who I was going to be specifically.

In today’s first reading we learn of Jeremiah’s call to be a prophet. It is not his idea. God issues it to him by telling him, “Before you were born up until this very day I formed you for this purpose.” Jeremiah, who was about the age I was when I started to think about the ordained ministry, protests: “I am just a boy. I don’t have a clue what to say.” His struggles are rooted not in self-doubt, but rather in self-awareness. He was right to perceive that he has no business being God’s prophet to an adult world. In response, God promises to speak through him and at some point the boy relents and accepts his calling. It is a slight variation on the internal/external drama.

Let’s think again about Jesus. How would you react if, brimming with confidence, you announced your specific plan for life to your family, your friends, your teachers, your coaches, your associates, and your priest, and they roundly tell you that you have got it wrong? I know that for some of you this is not a theoretical question. The human drive for esteem and recognition is, at its heart, a way of testing publically what privately we think and believe about ourselves. Sitting on the Commission on Ministry of our diocese I see first hand what happens when a person comes before us seeking entry into the ordination process and we determine that the person is not fit to proceed. It is devastating to that person. I imagine that being rejected by those close to him came as quite a blow to Jesus.

Here are some things we might take away from this:

First, rejection should motivate us to undertake a sober self-assessment. We are leery of people who believe God has called them to do something when not a single person affirms or supports their belief. Sometimes other people see something we are missing. Their wisdom, although painful, can be a saving grace. A good question to ask yourself is what are they seeing about me that I am missing?

Second, there are times when the best move is to move on and try again. This, in fact, is what Jesus did. He relocated to Capernaum. There, a new audience responded to his message with wild enthusiasm and sacrificial commitment. Jesus knew first-hand what he taught his disciples, “If a town does not receive you, shake the dust off your sandals as you leave and move on to the next place.” In truth, today’s Gospel reading says a lot more about the people of Nazareth than it does about Jesus’ calling.

Third, there is a difference between outright rejection and receiving a difficult truth about yourself. The person who rejects us cares nothing about us and is concerned only about him/herself. The person who will tell us the difficult truth loves us enough to do something risky. It falls on us then to hear what we are told and to do something with it. There is a difference between ‘no,’ ‘never,’ and ‘not yet.’ Being rejected is like a dagger to the heart. Being told a difficult truth can be like having a seed planted in your soul. Something good will come of it if your nurture it carefully.

Next, there are times when we need a voice from beyond to point us in the right direction. We may listen for the voice of God to tell us what to do, but, in my experience, it has always been another person who says to me what sometime later I come to realize as God’s words to me.

Finally, most of us here this morning pretty much have figured out who we are specifically. Of course we are always changing and feedback from others is always necessary, but for the most part we have discerned our call. The role we play most often now is that of the external voice for those younger who are in discernment. Ours is a powerful role. We can do great harm or great good in the life of a person. Ours is an important role. Validating another’s intuition, awakening gifts, inspiring dreams, supporting direction… take a step back, change the frame slightly and you will recognize that this is the work of the Holy Spirit in a person’s life. But it is our work too. It is how God works in and through us in the life of another person.

Posted by Keith Emerson at 10:43 AM No comments: