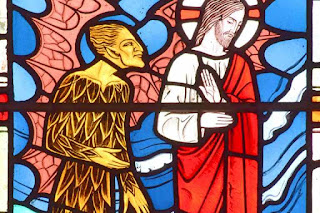 If you are looking for some entertainment after today’s service, go to YouTube and search for “The Marshmallow Test.”  Multiple videos will come up.  Choose one that is short and shows children.  The Marshmallow Test is a simple experiment designed to measure the ability of four-year-olds to delay gratification.  The child is sitting at a table.  An adult places a single marshmallow on a plate in front of the little tyke.  The adult then explains she must leave the room for a few minutes.  The child is told he/she is free to eat the marshmallow now, but will receive a second marshmallow if he/she saves the first until the adult returns.  When the adult tester leaves the room the four-year-old is alone (although secretly is being video-recorded).

The struggles these little boys and girls go through is hilarious.  One boy puts his finger on the plate and spins it round and round.  Several children touch the treat and some actually pick it up.  They smell it.  They squeeze it.  They lick it.  One child pulls off a small section and eats it.  Another uses her finger to poke a hole through it.  I know of no other video which so vividly portrays the experience of being tempted.

The first Sunday in Lent always takes us with Jesus into the wilderness where he fasts for forty days and is tempted.  The Gospels tell us the Temptation follows closely after Jesus is baptized: the moment the Holy Spirit falls upon him and a voice from heaven proclaims him “My Son,” thus giving Jesus a new identity.  The Spirit then leads Jesus into the wilderness.  There is a connection here with the people of the Exodus who wander, not forty days, but forty years in the wilderness and also are tested.  Their time in this barren landscape is designed to help them learn how to live into their new identity as God’s people.  So it is with Jesus.  While the Hebrews fail in the face of testing several times, Jesus does not.  He meets every test and masters every temptation.

Did you notice how at the beginning of the text it says Jesus is “tempted” by the devil throughout his time in the wilderness and how at the end it says the devil finishes every “test” and departs until an opportune time?  It occurs to me tempting and testing are not exactly the same thing, are they.  Temptation has something to do with being enticed or lured into sin, resulting in a fractured relationship with God and (often) with others and even with yourself.  Testing, on the other hand, challenges the vigor of our faith and commitment.  In his Epistle, James contends testing leads to endurance and character.  We might say temptation challenges us to give in while testing challenges us to give up.

Testing.  My college had four required “key” classes: one in religion, another in humanities, another called ‘creative’, and yet another in science.  No one could graduate without passing all four.  Guess which one was my biggest challenge.  Right, science.

The final consisted of 50 multiple choice questions and an essay.  For the multiple choice you filled in a computer card with a #2 pencil.  Halfway through the process I realized I had skipped a question and I had been miss-recording the majority of my answers.  So, my answer for Question #25 was recorded on the line for Question #24… and so one.

The classroom was one of those large, tiered, theatre style rooms, and I tried desperately to get the attention of a teaching assistant.  Losing time, I decided to start on my essay.  Finally, an assistant came to me and I explained my situation.  He said he would bring me a new computer card, which he did.  He placed it on my desk, as I continued to work on my essay.

Once I finished writing, I took up the card ready to begin the process of transferring my answers up until the question I had skipped over.  It was not until then that I noticed my new card was completely and immaculately filled in.  I immediately deduced I had been handed an answer key.  And let me tell, you, the pattern of its answers – B, D, C, C, A, (and so forth) looked nothing like the pattern of my answers!

Once again I attempted to get the attention of an assistant, which again took some time.  I then explained how I got to this point and my suspicion about the new card.  Somewhat nervously (and unconvincingly) he told me, “Oh no.  This is not an answer key.”  He took the card and went down to speak to the professor.  They were too far away for me to hear their conversation, but I could read the professor’s lips as he said, “Where did you get this?  That’s the answer key”.  The two talked some more and the assistant pointed up at me.  Then all of the assistant’s huddled with the professor and, after some time, someone brought me another new (and most assuredly blank) card.  I kept my answers as I initially recorded them, now knowing some of them were wrong.

After the test I went back to my room and told my story to my roommate.  “I think God is going to bless me for doing the right thing,” I told him.  His response: “You fool.  God was providing for your every need!”

I was never tempted to turn in the answer key as my own work, nor was I tempted to transfer its answers to my new card.  Nothing about this was alluring to me.  This test was a test – a trying of my core principles and beliefs.  More than a test in science, it was a test of character.  And, to be honest, it wasn’t so much of a trial (a difficult experience) as it was a revealing of who I am and what I value in myself.  It spoke to me of my identity.

When I think about testing I think about those of you who are living with illness and chronic pain, who are unemployed, or who are battling addiction.  I imagine these kinds of test are incredibly challenging as you attempt to live out who you are committed to be.

And, like most of you, I think this morning of the people of Ukraine who are being tested in a way no one ever should be.  The free world is praying fiercely for them and is watching with awe and admiration as they sacrifice all to remain true to their country and to their core principles.

Our Lord and Savior, when he was tempted never gave in.  When he was tested he never gave up.  And he promises to stand with us when we are tempted and when we are tested so that his faithfulness may become our strength.  May this be your experience as you move forward in this Lenten season and throughout life.

Posted by Keith Emerson at 10:12 AM No comments: