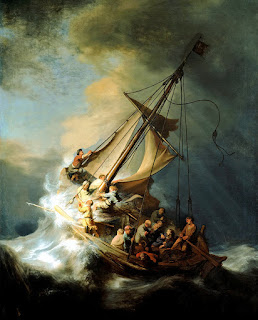 I finished reading Nathaniel Philbrick’s book Sea of Glory, which chronicles the story of the United States Exploring Expedition, consisting of a squadron of ships that circumnavigated the globe from 1838-1842.  Among its other achievements, the Ex. Ex. is credited with discovering the continent of Antarctica and mapping more the 1,500 miles of its coastline.  Most of this work was done under extremely difficult and dangerous conditions, including gale force winds and ever-shifting packs of ice.  I come away from the book impressed with the courage and skill these sailors brought to the sea.  Here is one passage to give you a flavor of what they experienced:

Dense fog made navigating the icy barrier a particularly hazardous endeavor.  Instead of their eyes, the lookouts depended on their ears.  When they heard “the low and distant rumbling of ice,” they knew it was time to tack.  Then there were the times when the usual sounds of a ship at sea – the rhythmic slap of the waves and the comforting creak of the rigging (which always seemed magnified in the fog) – suddenly ceased as the [ship] glided into the eerily quiet lee of an unseen iceberg.”  “[T]he transition was so sudden… that many were awakened from sound sleep…  [It is] an occurrence from which the feeling of great danger is inseparable.”

One of the squadron’s vessels, the Peacock, become so hopelessly ensnarled in the flows of ice its rudder was snapped off.  Unable to steer the ship, the captain and crew labored for hours and hours to direct its movements with a series of complicated, rapid, and demanding raising and lowering of sails.  Attempt after attempt to break free to open water failed and the ship’s haul was in danger of being crushed.  Finally, after more than 24 hours of life and death struggle, the ship broke through and the crew had to sail the battered Peacock more than 1,000 miles to New Zealand for repairs.

I share these stories because they describe the hazards of being on the water, something we encounter in today’s reading from Mark’s gospel.  While not nearly as long as the Chesapeake Bay, the Sea of Galilee is nearly as wide.  It is notorious for its sudden and dramatic change in conditions and because it is relatively shallow, strong winds can create formidable waves on it.

Pairing Mark’s account with Sea of Glory, here is what I sense is happening.  The fishermen in the group are accustom to the conditions and are working hard at the sails and oars.  The land-lovers in the group are terrified.  Most likely they have been ordered to bale water filling the haul at an alarming rate.  Jesus, having exhausted himself with “the crowd” they left behind, is in the midst of what my colleagues and I refer to as a “clergy coma.”  Many of us collapse on Sunday afternoons and do not come close to recovery until after a good, long nap.  Have you ever awakened from a nap completely disoriented; not knowing who you are, where you are, what day it is, or what time it is?  I think this is what happens to Jesus.  He awakes startled and acts before he comes to his senses.  The results are dramatic, to say the least.

It is not clear who wakes Jesus and says, “Do you not care that we are perishing?”  My guess it is the sailing novices, because the fishermen on board would not give up the struggle so easily and admit defeat.  And it is not entirely clear if the question indicates they believe they are doomed, or if they are urging Jesus to lend a hand with the baling efforts.  Either way, there is something universal in what they ask, “Lord, do you not care that we are perishing?”, Jesus’ command, “Peace.  Be Still”, and his response, “Why are you afraid?  Have you still no faith?”

I ponder often how the Creator of all reality can possibly care about me, let alone even be aware of me.  I can barely manage to keep track of my own extended family.  I spent two days of my vacation driving to cemeteries in rural Pennsylvania in order to find the tombstones of direct, but distant ancestors.  (I know, many of you must be wondering why I am not willing to charter a bus and make these amazing adventures a parish outing for all!).  I had to carry genealogy charts with me in order to keep straight even a handful of people and still felt confused.  If I can’t do it, I struggle to understand how God does.

But, my experience matches that of so many of you, and countless throngs of the faithful down through the centuries.  While I can’t explain how it is, I know – I just know – God cares about me.  They only way I make sense of it is to believe the Holy One is something so completely other that human limitations simply do not apply, while at the same time is something so close to us as to be known and knowable.

This morning’s first reading is one of the best known from the Old Testament – the story of David and Goliath.  We learned it as children, but could spend all our summer sermons pondering what it says to us as adults.  I come away from it this morning with two clear reflections.  First, David trusts how his experiences in the past translate well to the challenges of his present.  He believes in himself.  And second, he believes God cares about him and about his people.  Absent either of these, I doubt he would have stepped forward to slay the Philistine giant.

Does God care about us?  Think about those times when you have asked this question with every fiber of your being.  Most often the winds and the waves threatening to take you under abated only as God worked through another person or people to restore the peace and calm you needed in your life.  Does God care about us?  On our better days, we step forward to provide the flesh and bones of the answer by challenging the Goliaths of our times in order to bring peace and calm to the life of another.

When I was in Ohio I met with Jon, my friend from childhood.  Along with his wife, we were driving to have dinner at another friend’s house when Jon’s cellphone rang.  His elderly neighbor was in the midst of a family crisis raising concerns about his safety and wellbeing.  Jon was not going to be at peace until he knew his neighbor was OK.  We turned the car around and drove back to Jon’s house where his wife volunteered to give up her Friday night and this social engagement in order to care for their neighbor.  Does God care?  Yes, and I know this because Jon and his wife care.

I do not have an ax to grind with the First Lady.  Still, her fashion decision regarding what to wear while visiting immigrant children separated from their parents invites a moral, Godly, Christian response.  “I don’t care.  Do you?”  Yes!  I do care.  No, to the critics who say “these are not our kids.”  All children are our children.  “Lord, don’t you care about these innocents and what they are experiencing?  “Yes,” God says, “Yes I care with all my Being.  You need to show the world how much I care.  What you do will bring peace and calm.  I will see to it.  What you do will speak of your faith.  I will channel my care and compassion through you.”