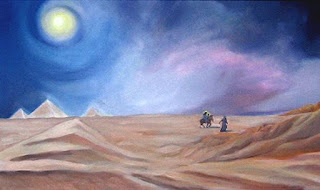 If you came to me for pastoral counseling and told me an angel spoke to you in a dream, the first question I might ask you is if you’ve had any recent changes in medications.   Given such skepticism, I am forced to make sense of the stories in and around the birth of Jesus.  Angels pop up everywhere to make significant announcements.  Gabriel encounters Mary in a garden.  Zechariah meets an angel as he does his priestly work in the Holy of Hollies.  A choir of angels appears in the night sky near Bethlehem.  And then there is Joseph and his manifold dreams.  Did you know there is over 300 references to angels in the bible – no small number!  In Holy Scripture, the existence of angels is always assumed but the nature of angels is little discussed because the emphasis is never on them.  The focus is always on the message they convey.

A 1993 Gallop poll discovered at the time 73% of Americans believed in the existence of angels.  Since the mid-90’s there has been an explosion of ‘angelmania’, manifesting itself in books and magazine articles, consumer products, and popular entertainment – TV shows like Highway to Heaven and Touched by an Angel.  A guest appearing on a talk show who told a story about a personal experience involving an angel received over 8,500 letters from folks describing their own experiences.

Protestants and Roman Catholics, along with the Latter Day Saints, subscribe to a doctrine of angels who are spiritual beings created by God to serve God.  These varied traditions even embrace the notion every person is in the watchful care of a guardian angel.  Sue Bohn holds there are three types of angels: good angels (those who do God’s bidding), bad angels (who have rejected God and now are evil), and ugly angels (bad angels who disguise themselves as good angels in an attempt to lead people astray).

I posted on Facebook last week, asking people to relate their own personal experience with angels - messaging me if they wanted the story to remain private.  I was honored to be brought in on many powerful and moving events in people’s lives.  Most related an experience of a loved one appearing to them in a dream - typically a spouse or parent.  Most often the message they conveyed was they are at peace.  A few of the dreams contained specific directions.  One person reported the presence of a loved one in the passenger seat of the car imploring him, the driver, three times to slow down.  Finally heeding the advice, the driver immediately went around a blind curve and came upon an accident.  Had he not slowed down he would not have had time to react.

These personal stories raise an intriguing possibility with the stories we read this morning.  Is it possible Joseph ‘knows’ or ‘recognizes’ the angel who comes to him in his dreams?  He dreams an angel tells him to remain betrothed to Mary even after she tells him she is with child.  He dreams he must take his family and flee to Egypt.  An angel dream tells him when it is safe to return, but still another dream cautions against resettling in Bethlehem.  It certainly would be easier to hear these directions if they come from someone you know, love, and trust.  But this is mere speculation.

I don’t know if I have a guardian angel or not.  I never had the experience of being protected in some fantastic and unexplainable fashion.  As we engage the Daily Offices, I am struck by how our morning prayers ask for protection and our evening prayers give thanks for coming safely through the day’s events and activities.  I certainly believe God protects me, but I have never thought much about exactly how this happens.  Perhaps each of us is in the charge of being sent by God to keep an eye on us.  Several of you told me this is exactly what you experience in your life.

My experience is God leads me and directs me.  Most often God is at work in and through my own intuition, through the sage advice of a trusted guide, and in countless other practical and pragmatic ways.  In addition, I often have the experience of clarity coming during a time of prayer or the reading of Scripture.  I suspect a fair number of you are thinking, “Me too!”  Yes, God is engaged in our lives, even though we do not sense it involves angels.  Still, this morning we recognize God’s special protection for the Holy Family coming in the form of dreams and an angel.  And we give thanks for God’s protection and guidance in our own life; no matter the form in which it manifests itself.