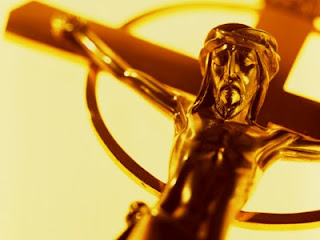 This morning we hear one of the best-known verses in all of Scripture – John 3:16: “For God so loved the world that he gave his only Son, so that everyone who believes in him may not perish but may have eternal life.”  Even before the fan with the wild rainbow wig showed up at every sporting event imaginable waving a placard with the reference to this verse, most of us knew it already as being the good news in a nutshell.  As familiar as it is, the two verses leading up to it allude to one of the more obscure references in the bible – John 3:14-15: “Just as Moses lifted up the serpent in the wilderness, so must the Son of Man be lifted up, that whoever believes in him may have eternal life.”

It refers to the event described in today’s first lesson when God’s people complain about hunger and wandering in the wilderness and God sends poisonous snakes to punish them.  Many are bitten and die before the people repent and cry out to Moses for mercy.  Moses, in turn, prayers for them and God directs him to make the image of a snake and mount it on a pole.  It comes to be known as the Nehushtan and everyone who looks at it is healed.  The Nehushtan becomes such a sacred object the people of Israel place in the Holy of Holies of the Temple along with the ark containing the 10 Commandments.

Either lost or destroyed by his day, Jesus is still aware of the story of the Nehushtan and sees in it a parallel to his own death.  He too will be lifted up on account of the sins of the world and all those who look upon him will be saved from the curse of death.

Here is what I find so interesting in these two accounts.  Each represents something horrible about the human condition.  Embedded in each story are the elements of judgment and death.  The only path to healing involves looking squarely at the things which embody our short-comings – the image of a snake on a pole or the Crucified Jesus on the Cross.  Why is it necessary to face our failures in order to find forgiveness?

Almost every week a public figure has to explain one misdeed or another.  This past week it has been Andrew Cuomo, the governor of New York.  As accusations mount, his claims of innocence become more suspect.  Like many before who have fallen, we wonder why people in his position are so allegoric to the truth.  We get admitting to immoral conduct will have an impact on your career, your family, and your life, but it is so dishonorable and so despicable to malign your victims as a strategy to defend the indefensible.  In most cases it is more of an affront than the original offense.

Paul Krugman, the economist and Nobel Award recipient, wrote in a 2017 column about what he calls “an epidemic of infallibility” which requires people (and especially powerful people) never, ever to admit to making a mistake.  Some fear owning up to faults and failures makes them appear small and weak.  The old adage “it takes a big person to admit when he you are wrong” seems to have been replaced with “only losers fess up.”  Behind it all, contends Klugman, is a soul too fragile to admit to its shortcomings and to engage in self-reflection honest enough to result in self-criticism.

The more insecure or unchecked a person’s ego, the more likely he or she will approach failure from a perspective of self-interest.  How bad will this make me look if I own up to it?  Will I come off as incompetent, dishonest, immoral, hypocritical, or even monstrous?  What will it cost me in terms of power, money, friendships, family?  Wouldn’t it be easier to deny what I did or to blame others or to do both than to take responsibility for my actions?  Such is the interior conversation during an epidemic of infallibility.

We all know what the first sin was… eating the apple.  Do you know what the initial human response to sin was?  If you guessed shifting the blame, you are close.  Adam blaming Eve was the second response.  Even more telling though is what happened before… hiddenness.  Adam tries to hide from God because he doesn’t want God to see him as he truly is.  Not much has changed about the human condition since then.  Hiding and blaming remain our basic strategies to insulate ourselves against the truth of our actions and their consequences.  And they run counter to what Jesus says in today’s reading.  Again, why is it necessary to face our failures in order to find forgiveness?

At a human level, facing your failures demonstrates you are humble enough to acknowledge your faults, it demonstrates you value those you hurt through your actions, and it hints you are willing to learn from your mistakes in order to amend your life.  As the saying goes, “good judgment comes from experience, and experience comes from bad judgment.”  Mother Teresa noted, “some things come into your life as blessings.  Some come into your life as lessons.”  The question is are you willing to learn.  When we come up short, facing your failures is the only pathway to personal growth.  Denying them leads only to our downfall and doom.

At another human level, we are much more willing to accept the apology of a person who takes responsibility for his or her actions.  We respect a person who attempts to make restitution and repair the damage he or she has caused.  We are willing to listen to explanations as long as they don’t deflect ownership.  We demand a person shows concern for those they have wronged or hurt.  All of this can happen only after you look squarely at what you have done.  Anything less is a desire for cheap grace.

Beyond these human motivations, there is a spiritual reason to face your failures.  It goes back to the desire to hide from what we have done.  We reason if we can hide it from others and if we can hide it from God then we won’t have to face it ourselves.  This would be a prudent strategy if God’s only desire is to punish wrongdoing.  But John 3:16 does not begin with “God so abhorred the world...”  God demonstrates deep, unbreakable love for the human family by transforming images of judgment and death into instruments of life and symbols of love.  The Nehustan becomes the means of healing.  The Cross, which represents humankind’s deepest rejection of God, becomes the means of forgiveness and the doorway to everlasting life and restored fellowship with the Holy One.

What is required of us?  A willingness to look at the consequences of our actions in order to know God’s love is strong enough to embrace the worst we are capable of doing.

Our Lenten journey is more than a penitential exercise, although it is this to be sure.  It is a time for us to take stock of the good, the bad, and the ugly in our lives.  It is also a time to recognize how our worst elicits God’s best, how walking the pathway through our failures to a more faithful life is possible because we always walk in God’s unfailing love, and how God’s unfailing love provides the means for us to come out of hiding and to own our actions rather than blame others for what we have done.

Posted by Keith Emerson at 10:06 AM No comments: